Is it possible to be homesick for a place that is not your home? If so, I am majorly Vietnam-sick. 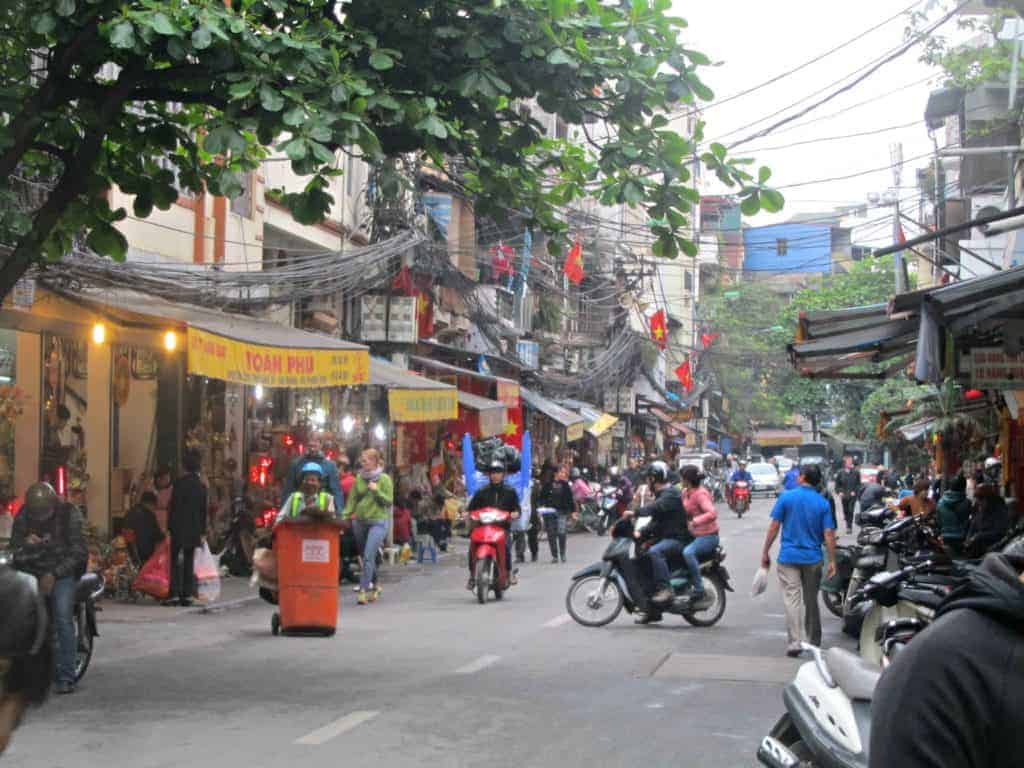 Asia had never really been somewhere Josh & I were that keen on visiting, but when a friend of mine told us she was getting married in Bali we decided to make the most of the trip and go someplace else too. After a bit of research we decided that Vietnam was the place for us…and we couldn’t have been more right. Vietnam stole our hearts from the minute we stepped out of the airport in Hanoi.

I’m going to drag this out over a few weeks and only cover 1 city per post because it just would not do justice to our trip or to the incredible country of Vietnam to rush through. So if you’re looking for a recipe or farm post, I’m sorry – please come back later in the week!

Driving into Hanoi from the airport was a complete change of scenery. Take a couple of country bumpkins from a place where a couple of cars drive down the road per hour and send them to a city of 6 million people in a third world country, with 4 million motorbikes (scooters) and you have got some Class A culture shock!

We were booked on a tour with Intrepid Travel but didn’t have an airport pickup arranged. There was a guy holding an Intrepid sign but when we approached him he seemed super nervous so we figured he was just trying to make a quick buck! So once we avoided the fake greeter we grabbed a taxi – TIP: if you are ever in Vietnam make sure you negotiate the taxi fare first – not a big deal around town but for longer trips such as to and from the airport agree on a price. It should cost around US$10 for a sedan and is about a 30 minute trip.

Once we were settled into our hotel we went exploring! There is so much going on and the people are just so busy! There are small shops everywhere that are separated into streets all selling one particular item – shoes, clothes, phone cases, fruits & vegetables, chicken (and chickens!), beer. It took us a while to figure out the pattern – we actually just thought it was weird that there were so many competing shops all together! I actually think a lot of families own a few stores in each street and kind of work together that way. 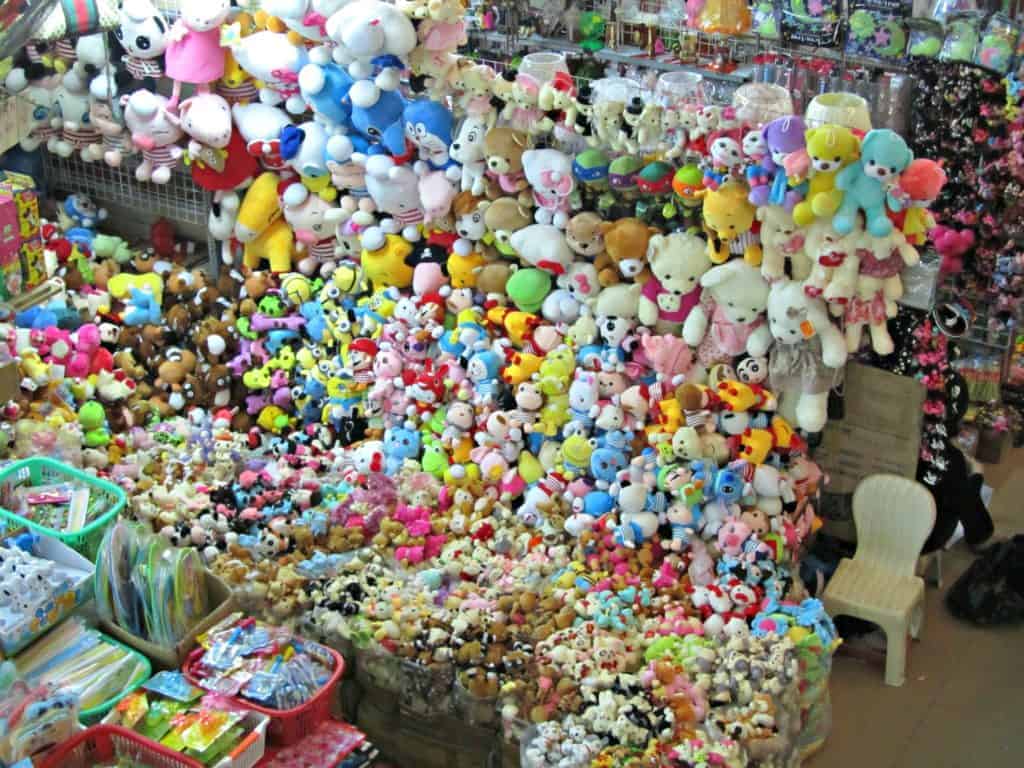 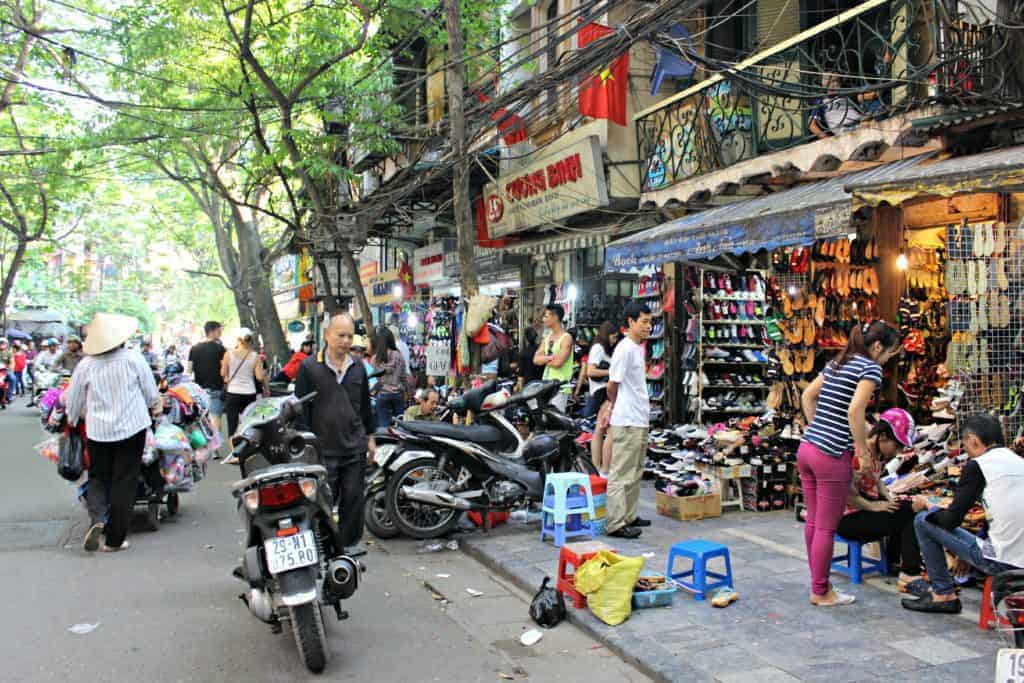 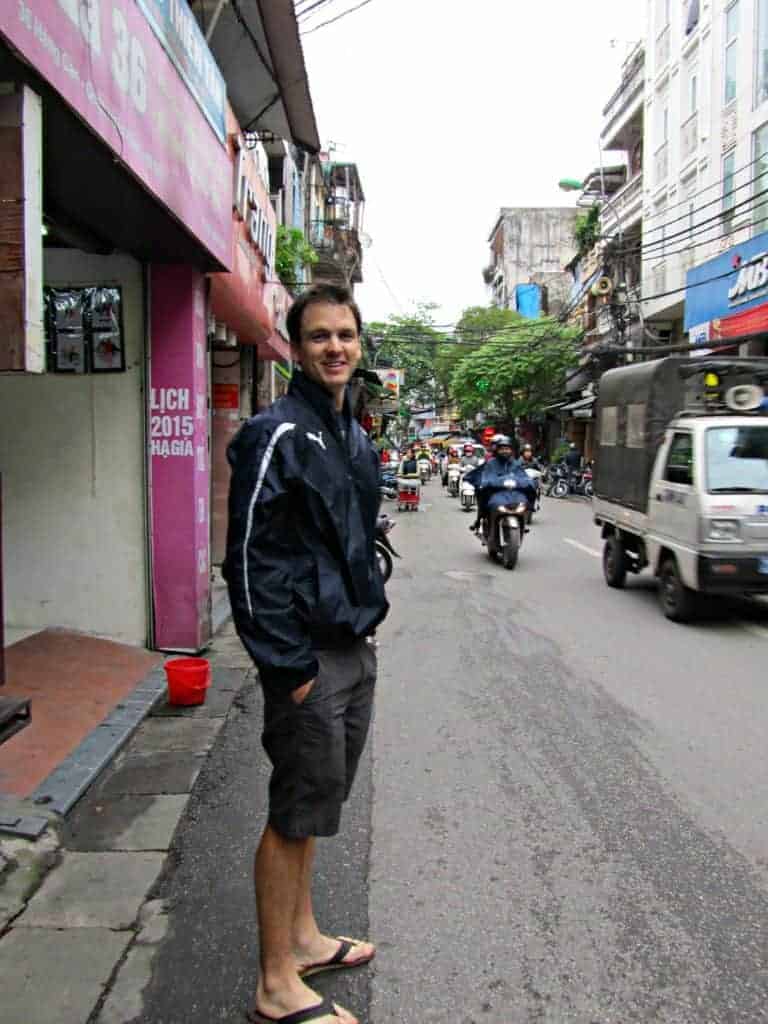 Trying my hand at being a local! 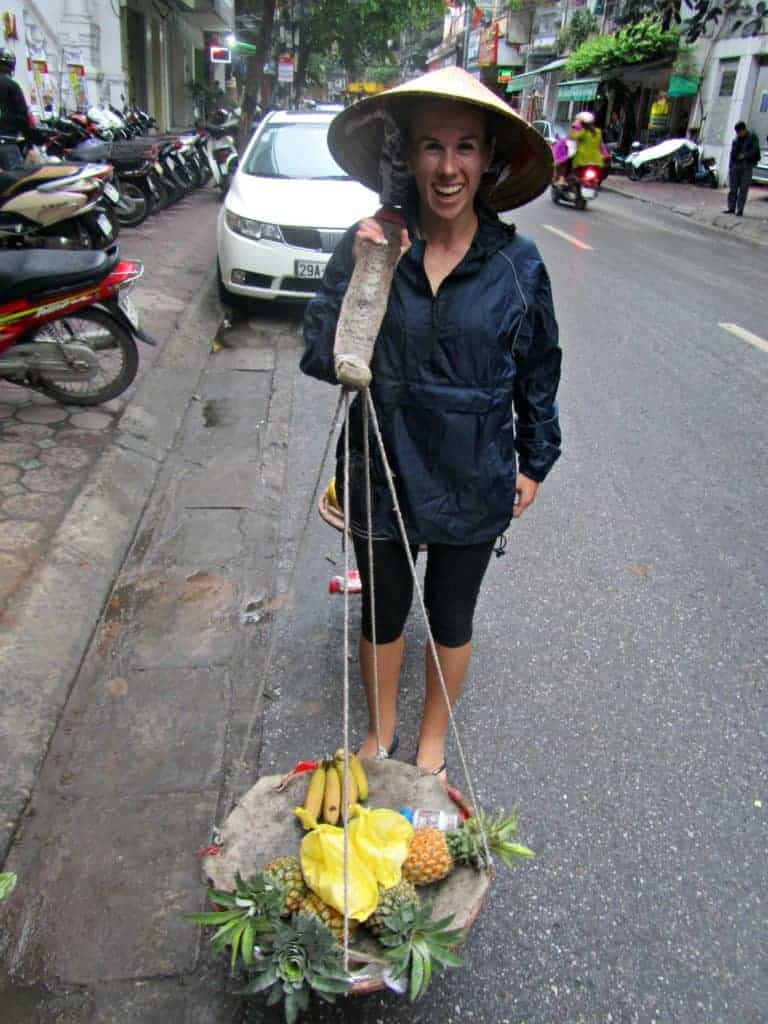 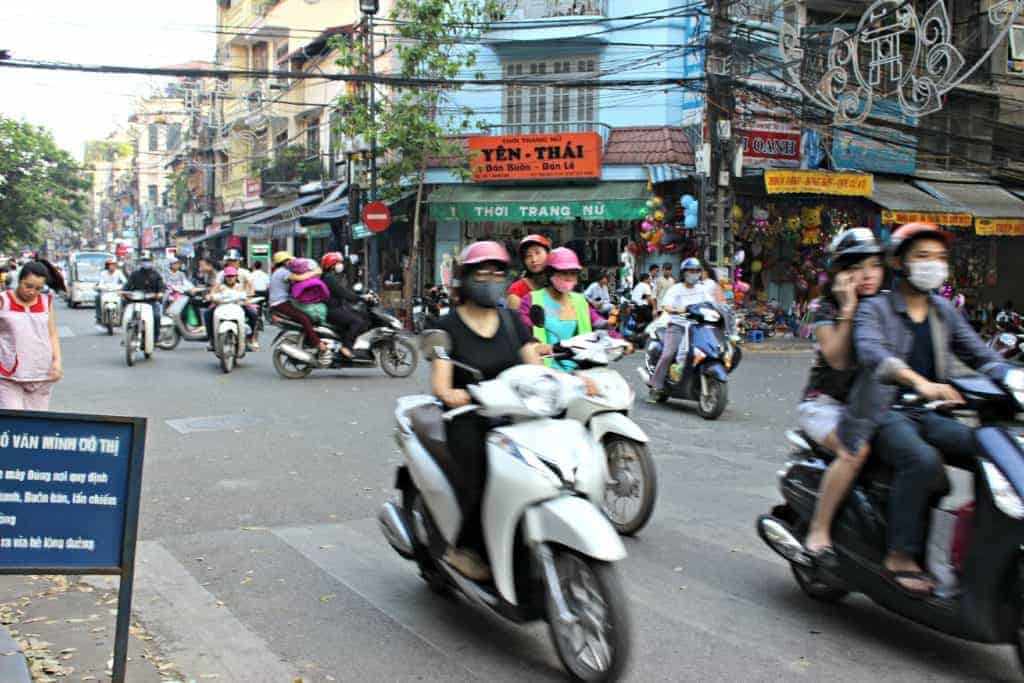 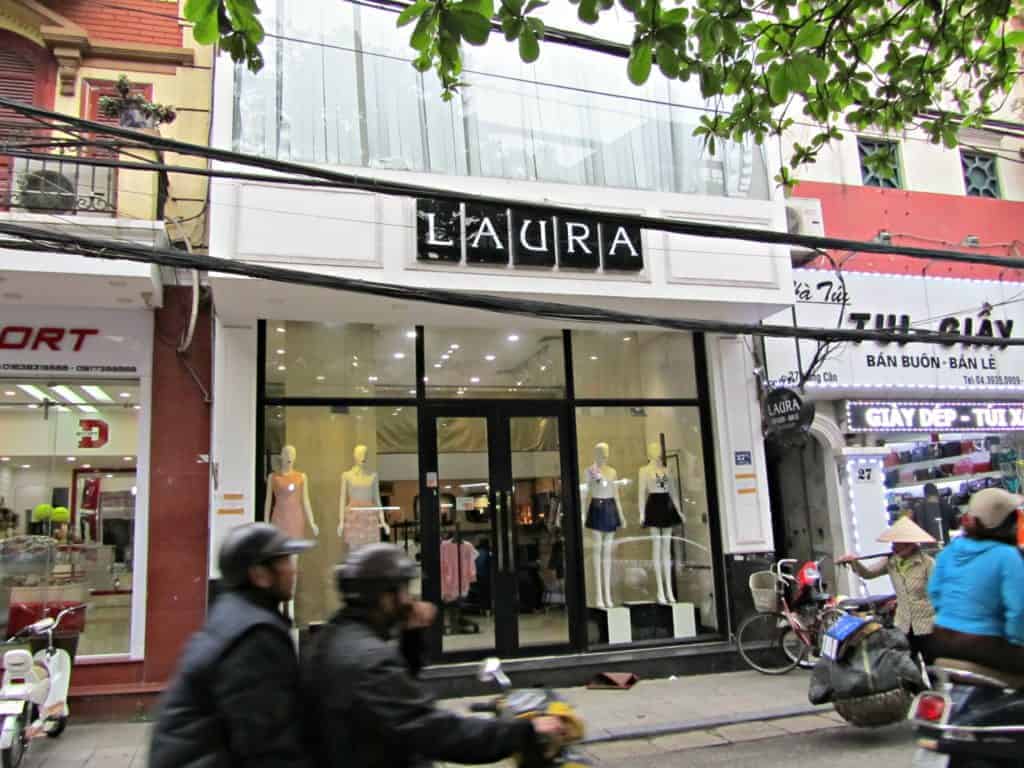 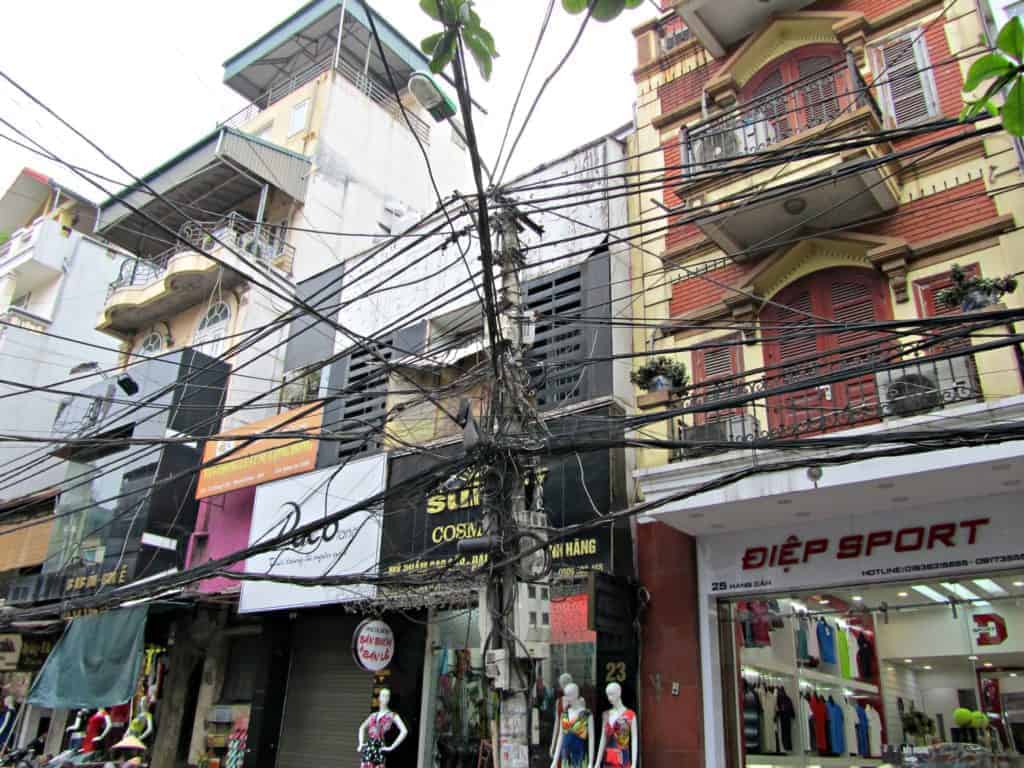 The most important lesson we learnt in Vietnam was how to cross the road. Walk out onto the road, regardless of how many cars/motorbikes are coming at you and slowly but without hesitating, walk right across the road. The vehicles WILL move for you! It was really scary to start with but by the end we were practically doing it with our eyes closed. It helps to remember that they don’t actually want to hit you! There will be a lot of tooting, but it’s friendly “I’m here” tooting, not angry tooting!

We walked right down to Hoan Kiem Lake in the centre of Hanoi and had a beer at the City View Cafe – probably the most expensive beer in Hanoi but at $3 a bottle it hardly broke the bank! And the view was totally worth it. 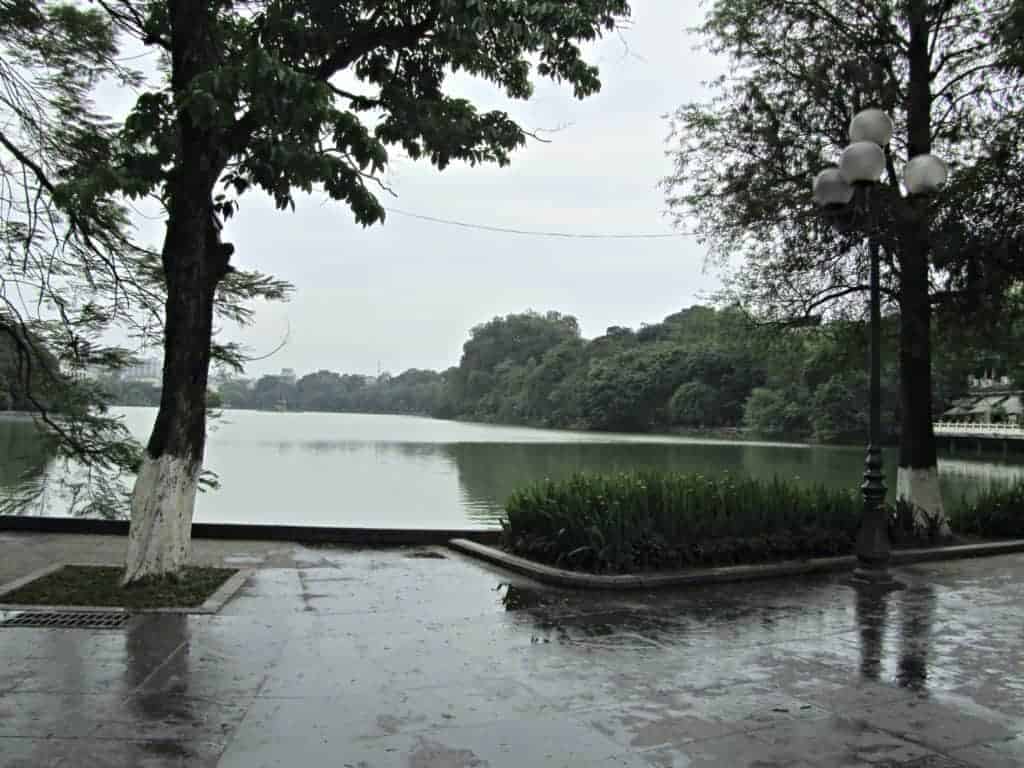 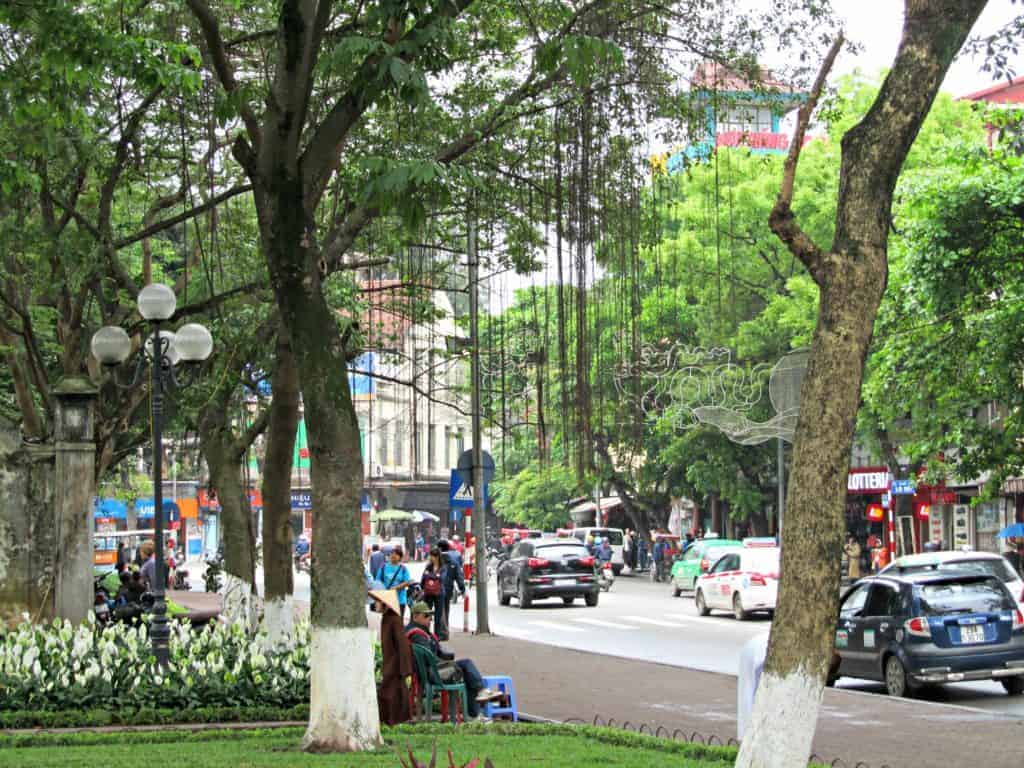 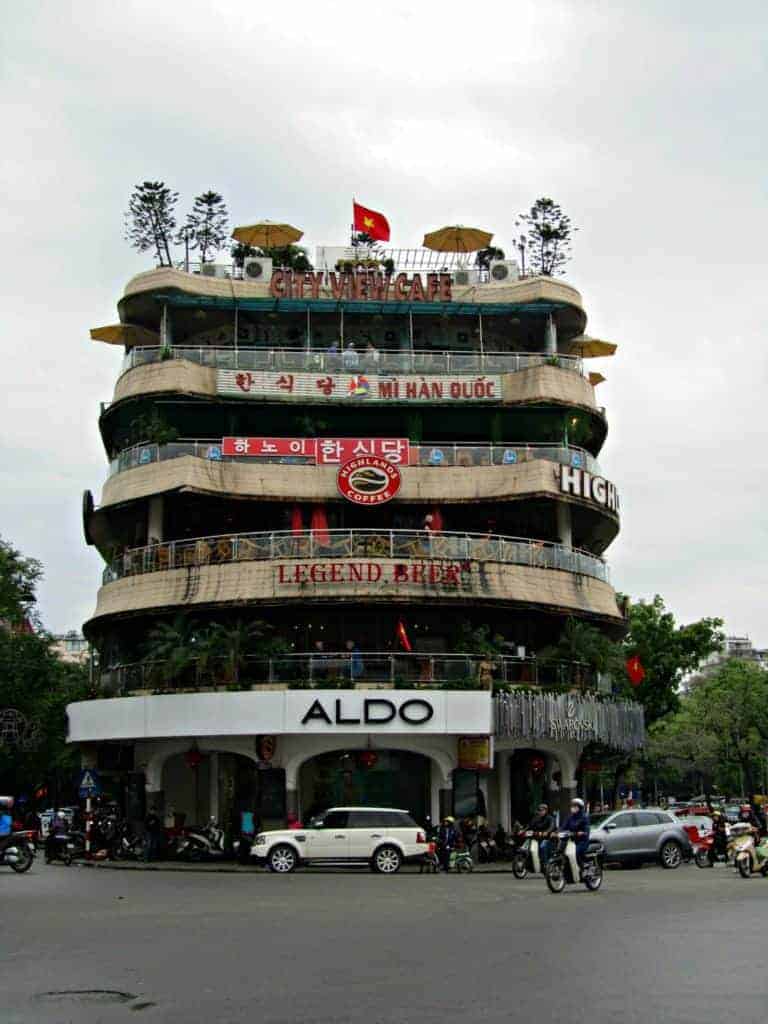 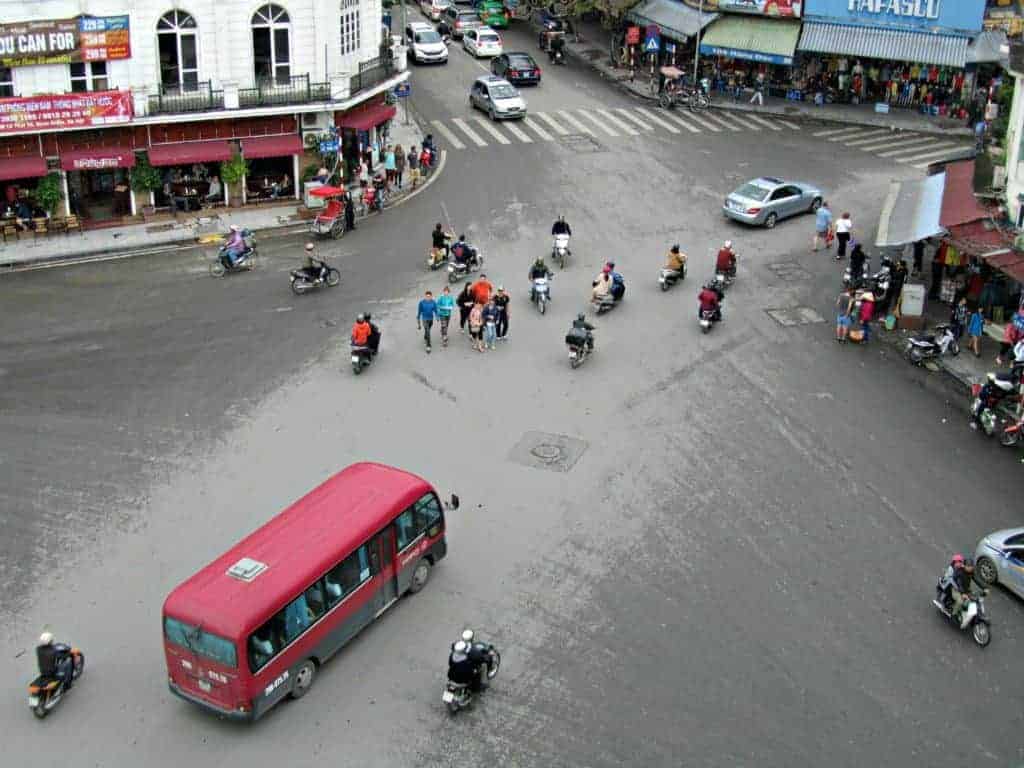 That night we met up with our tour group – it was honestly like something out of the Amazing Race…such a mixed bag of people and it couldn’t have been better. We had fellow Kiwis, Aussies, Americans, Germans and even a token Irish!

On of the absolute best things we did was getting up at 5.30am for Laughing Yoga in the town square, right by the lake. Yoga is a relatively loose term for this wake up routine that the locals do every single morning. Our guide described it to us as a way to wake up and make you happy. Well, that’s exactly what it was! We were in a large group, copying a couple of ladies at the front doing ridiculous moves and poses, pulling faces, massaging each others backs and forcing ourselves to laugh. It was absolutely hilarious, but I’m telling you, it worked! We were all genuinely grinning the whole way through, as were the locals. If I lived in Hanoi I would make this a regular thing for sure!

Probably the funniest part was when we were in a massage circle towards the end. Josh, who is over 6ft tall was behind a teeny old lady who was less than 5ft tall and about 80 years old! He took it really easy on her when he was massaging her (such a gentleman) and then told me later that when they switched, she grabbed him around the middle, bent him over so she could reach his back and just went for it! I think she probably felt a little ripped off!

The locals were extremely friendly and came up and gave us all hugs at the end which was lovely! If you are ever in Hanoi, I couldn’t recommend this more. 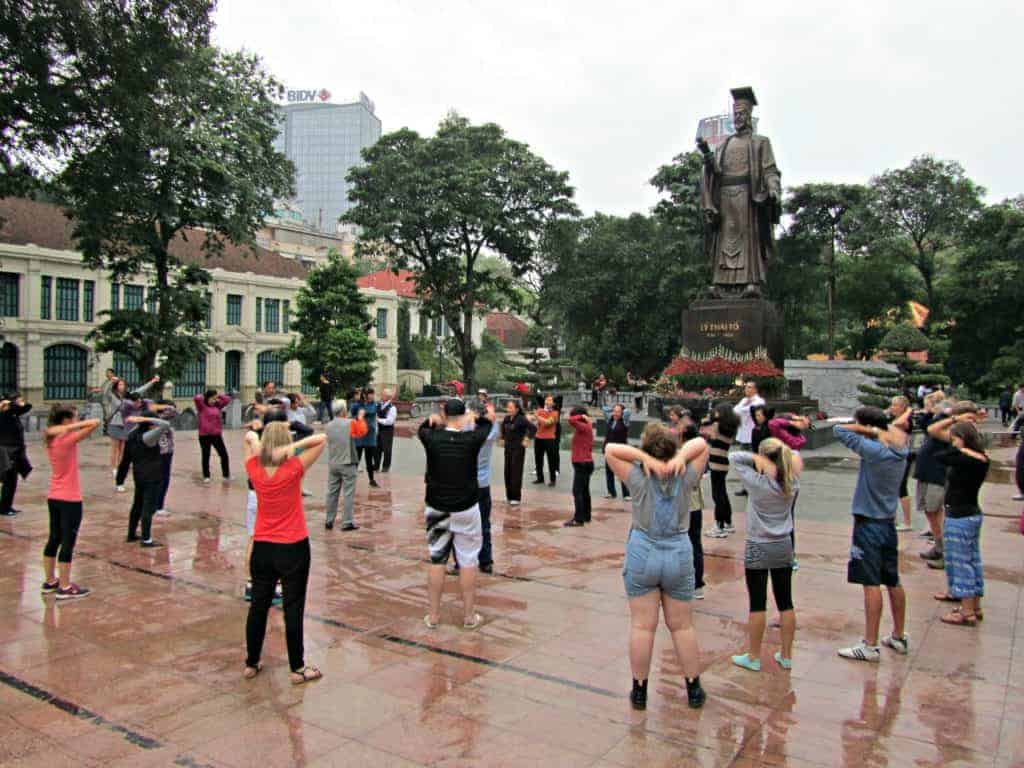 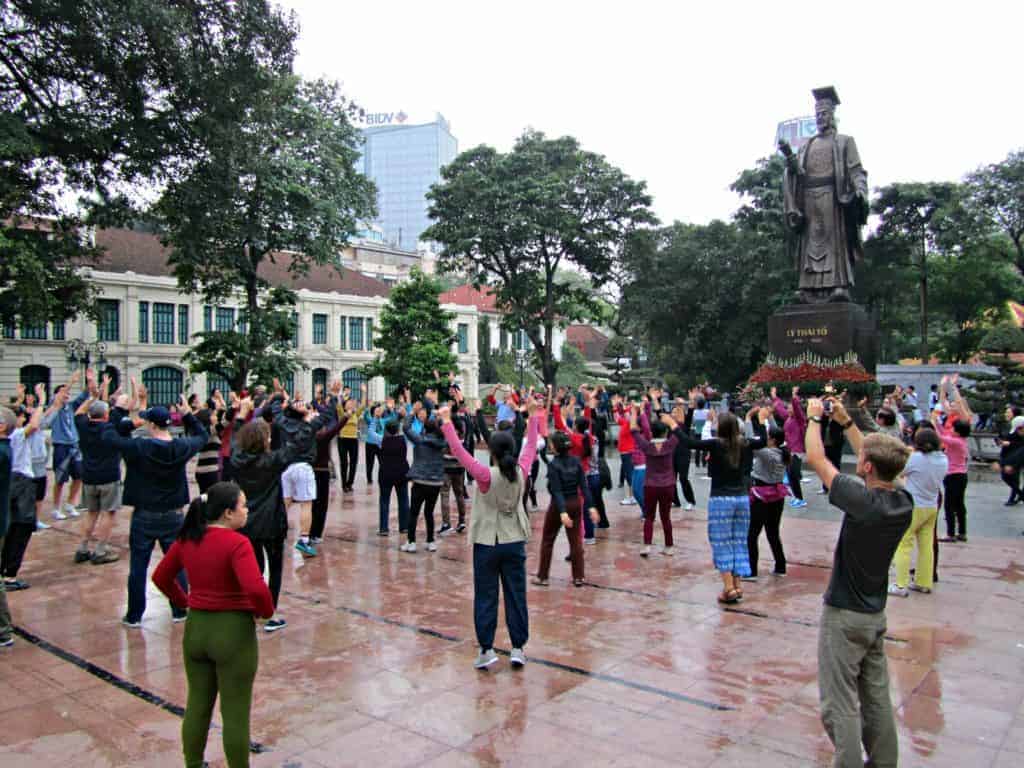 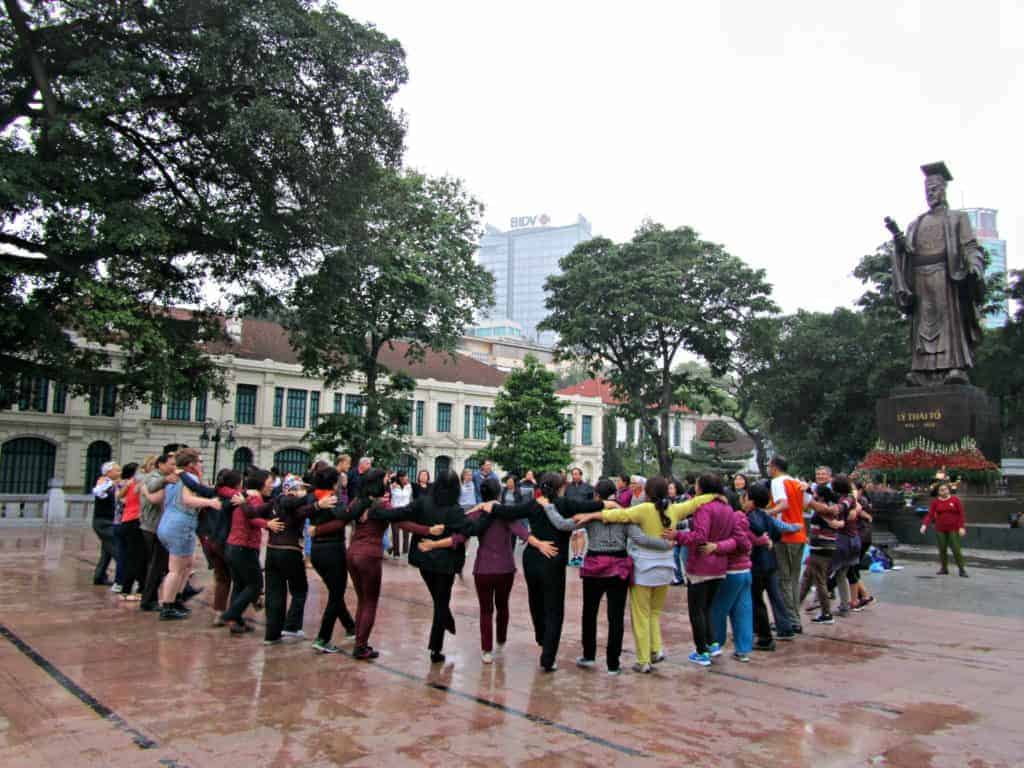 We then took a bus to Halong Bay for the night (but that’s a story for another day) and returned to Hanoi the following afternoon.

Back in Hanoi we did a little more wandering around and I bought the cutest and most comfy pair of pants I’ve ever owned – elephant pants!! And you wouldn’t believe it, but in a crazy, bustling city of over 6 million people (not including tourists) we somehow bumped into a girl from NZ that I nannied with in London and her husband who Josh went to school with! Not only is New Zealand a small place, turns out it really is a small world! 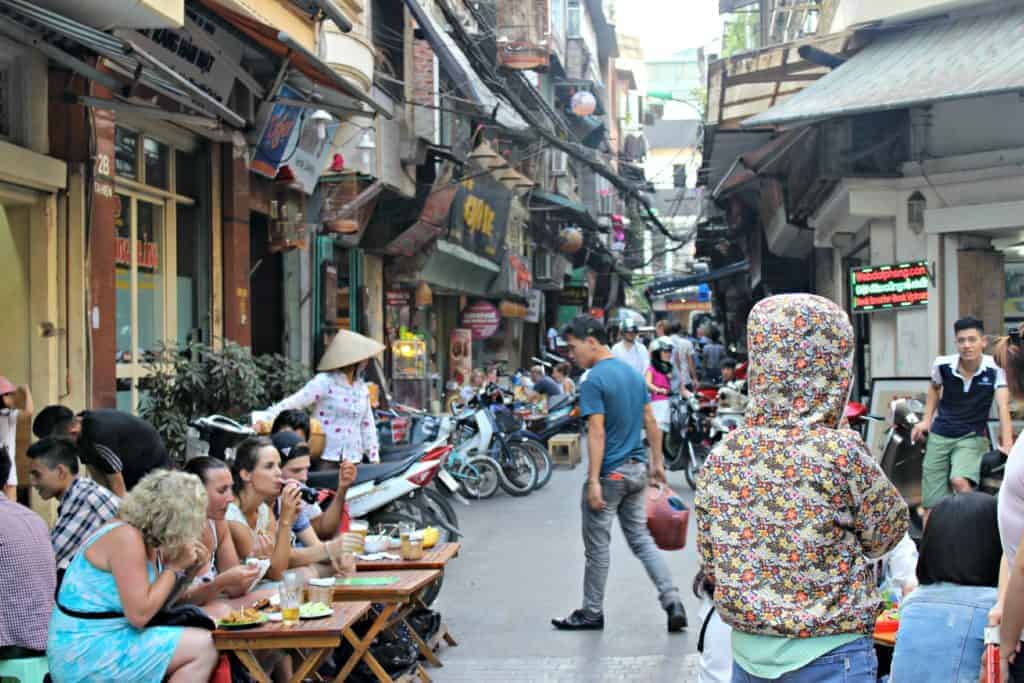 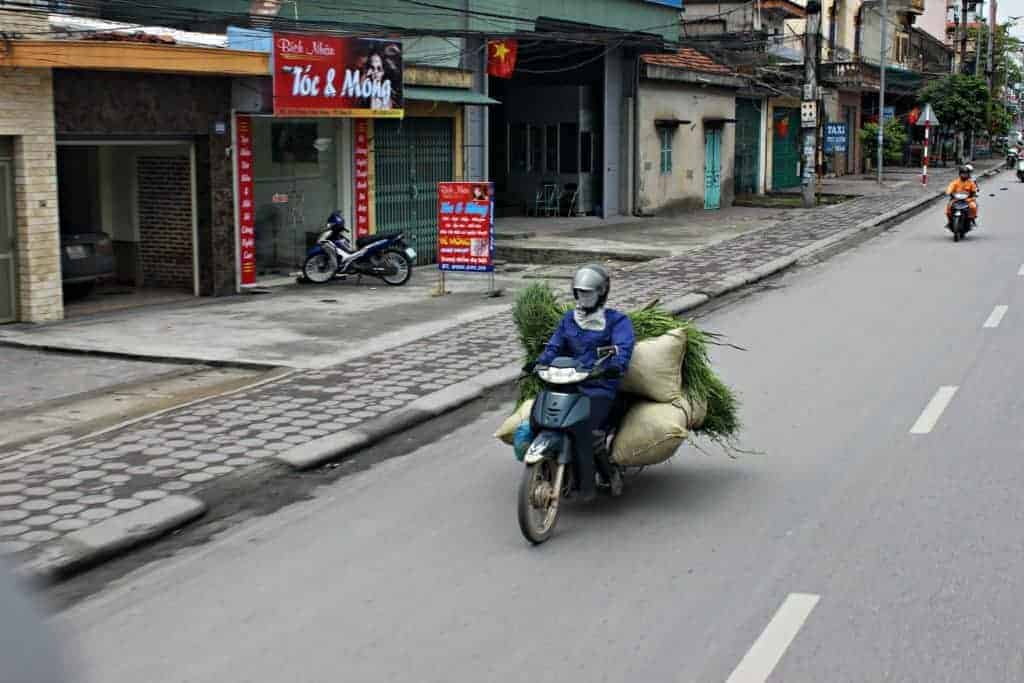 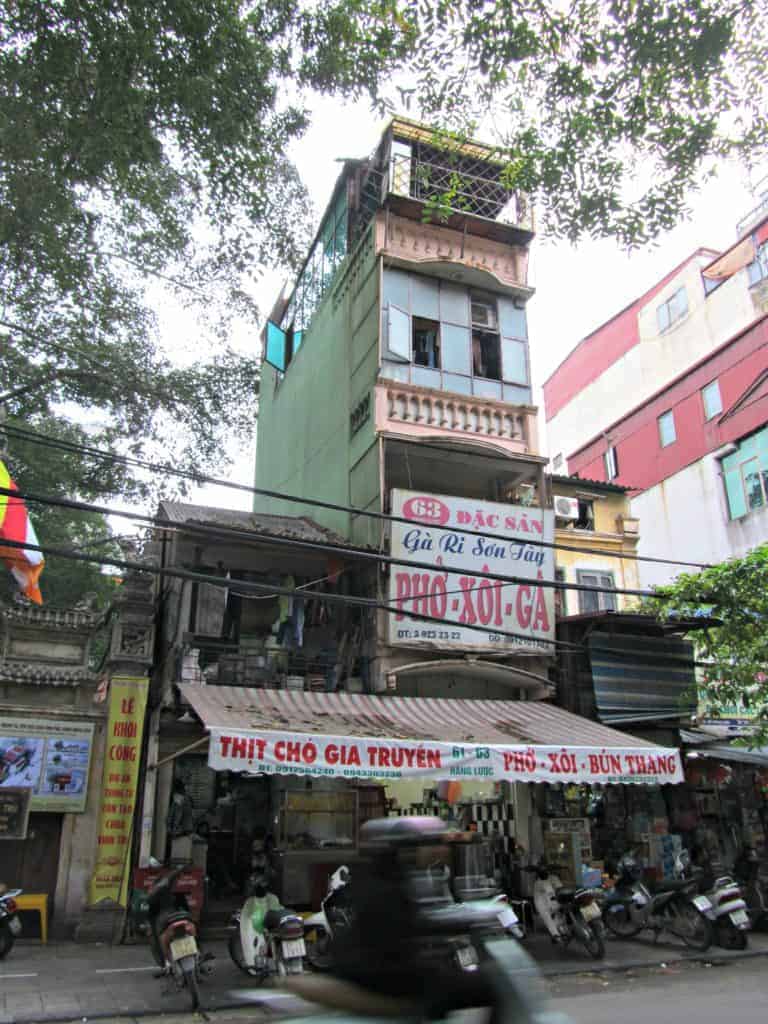 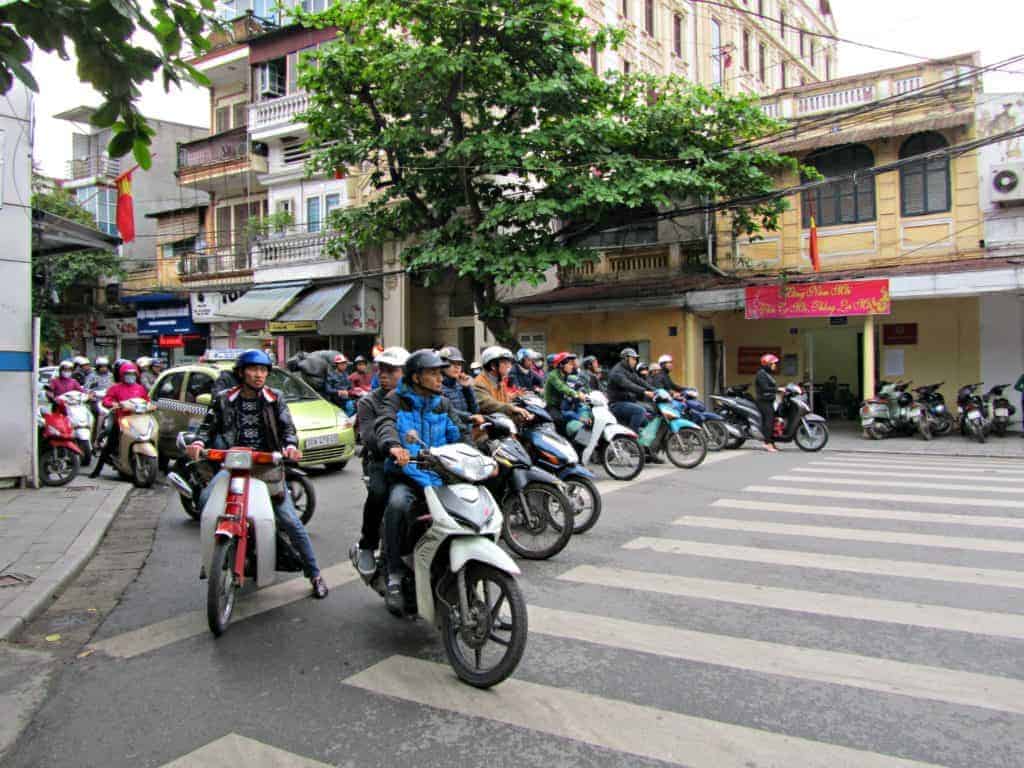 We spent the evening trying the local specialties – egg coffee from Giang Cafe in the Old Quarter which is an indescribable drink! It is either coffee or chocolate but with an “egg” topping made from eggs, condensed milk and sugar. Our guide also said there was cheese in it but I’m pretty sure he either had his words totally mixed up or was just pulling our leg! It was creamy and almost marshmallowy and absolutely one of the most delicious drinks I’ve ever had. Now to try to recreate it! 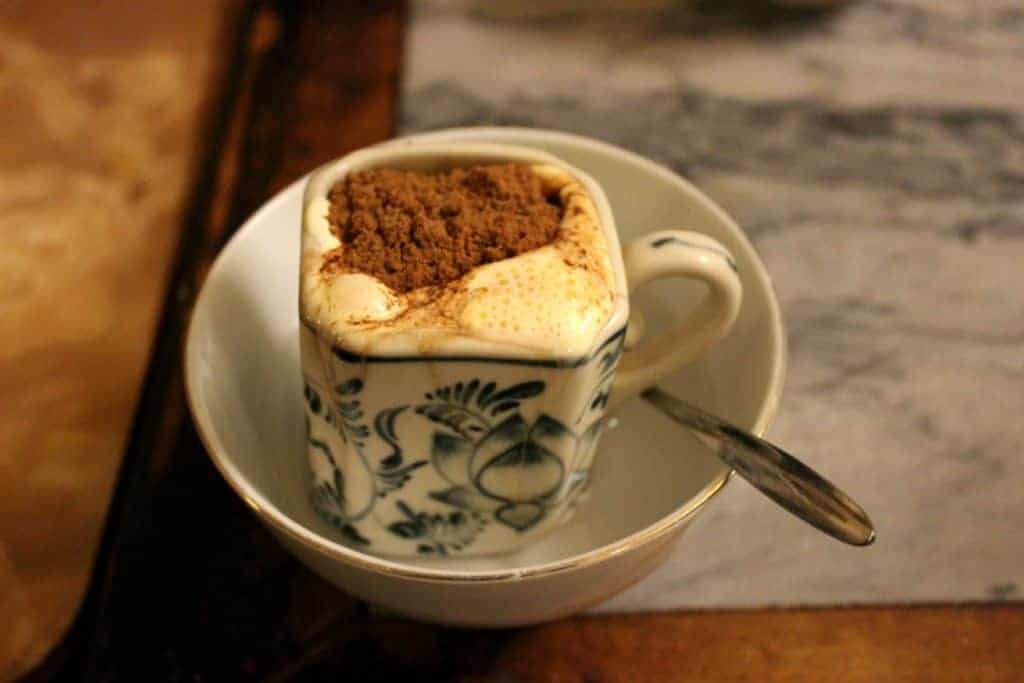 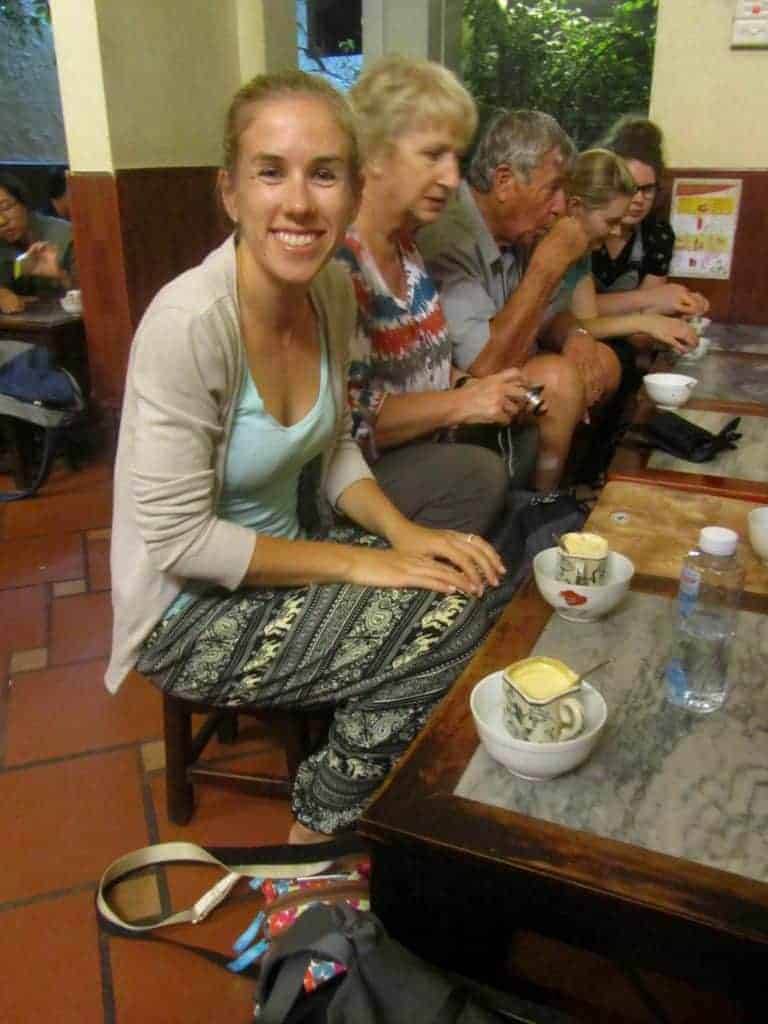 We went for a ride around the Old Quarter & French Quarter in an “electric car” – basically an oversized golf cart which was the perfect way to be amongst all the traffic….but safely! Dinner was at the one of the dodgiest, dirty looking places I’ve ever seen, let alone eaten at – Bun Bo Nam Bo Cafe! Our guide walked us in and I am sure my face was super skeptical! He assured us though that it was fine and that the rubbish on the floor was a good sign – it means the restaurant is busy as it is customary to throw your rubbish on the floor! And he was not wrong. The food was absolutely incredible! There was no choice, it was Bun Bo or nothing – as you can see from the picture they just have an epic production line of bowls on the go that we could see from the balcony above. And it was goooood! Rice noodles in a beef type broth with vegetables, bean sprouts, coriander and peanuts! Yum! 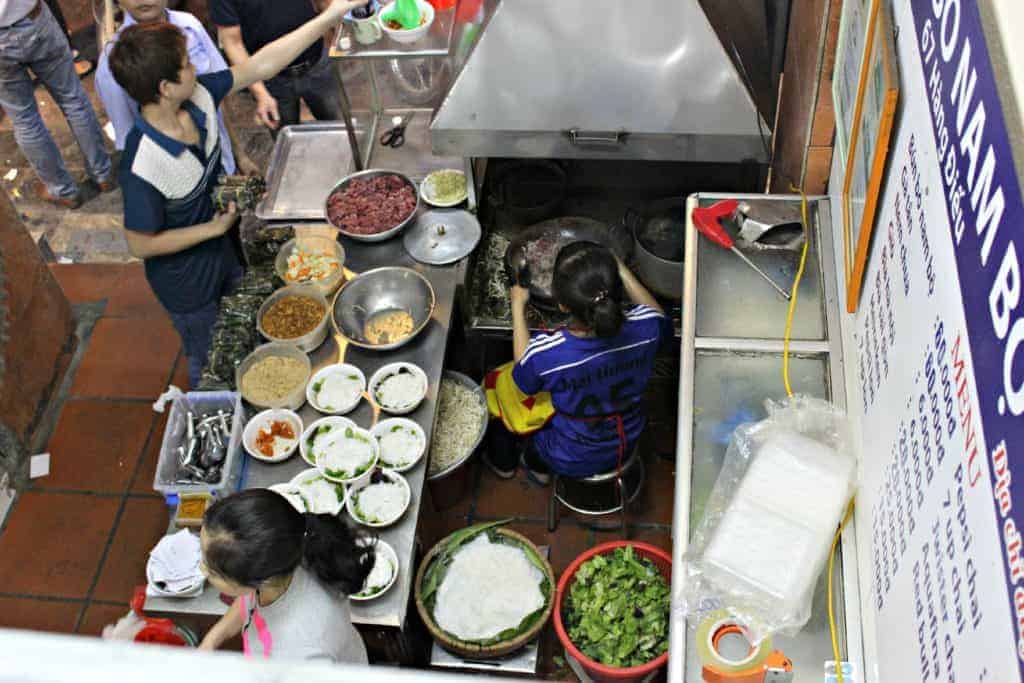 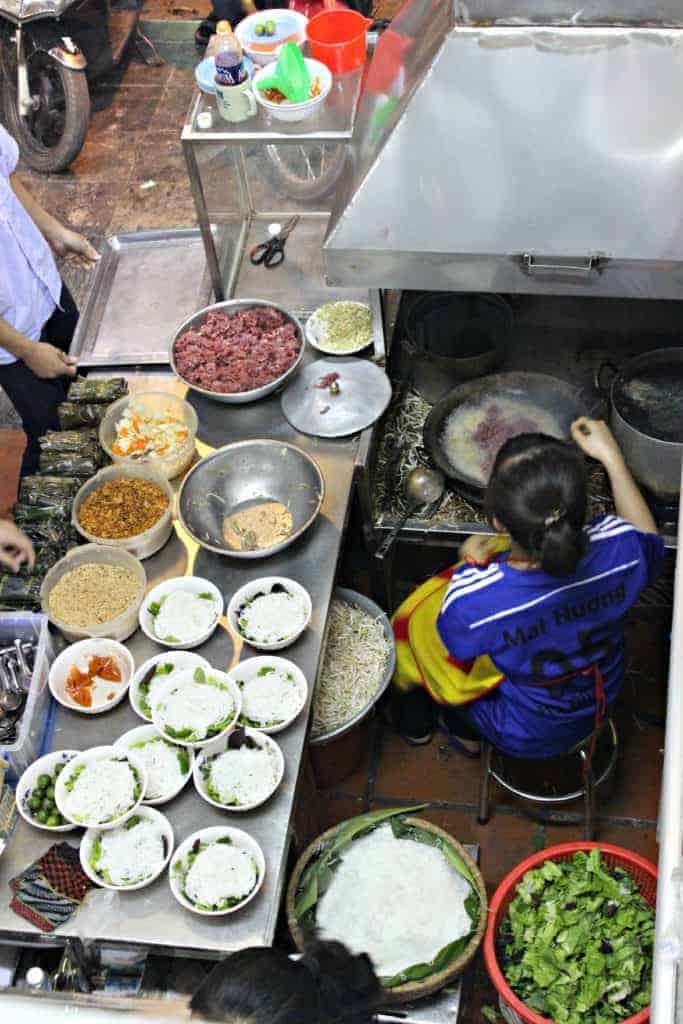 To sum up Hanoi in 5 words? Vibrant, friendly, bustling, tooting, craziness! It was one of the coolest cities I’ve been to and it just gave me a good feeling.

After an incredible night and couple of days in Hanoi we boarded an overnight train to Hue. Hanoi absolutely blew my mind and was the perfect introduction to Vietnam.