As you know we took a trip in April and spent 10 days in Vietnam. Here is part 2 of the trip – the beautiful UNESCO World Heritage Site of Halong Bay. 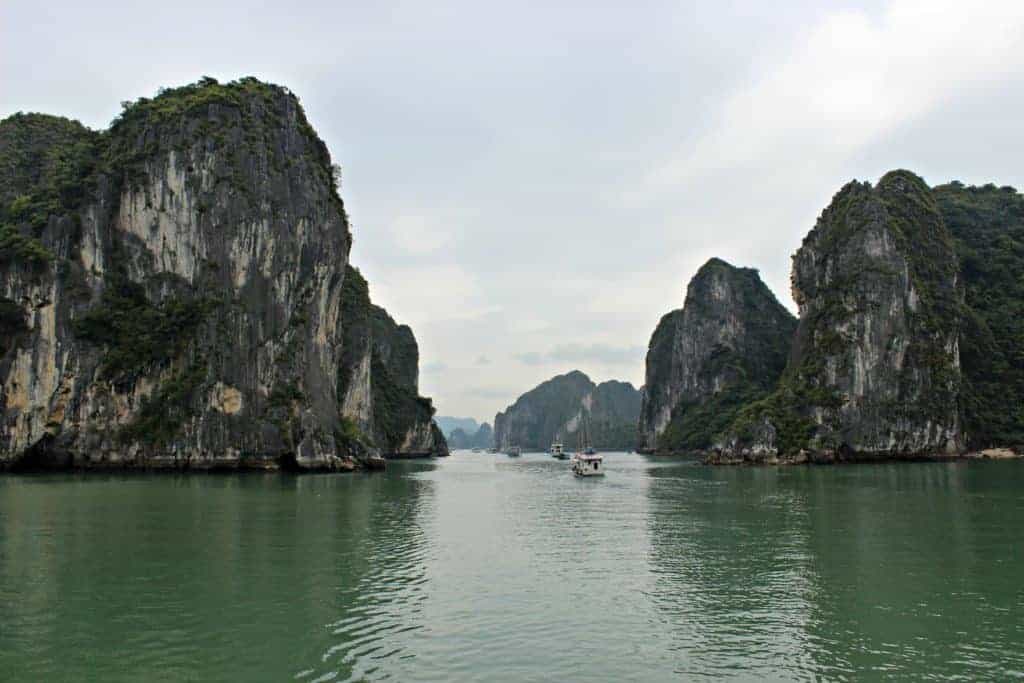 We took a bus from Hanoi up to Halong Bay in northeastern Vietnam. I had seen pictures of the bay before we got there so I had pretty high expectations and I was not disappointed!

We arrived at the dock and boarded our boat which was essentially a hotel on the water. We were supposed to be staying the night on the boat but were told as we boarded that couldn’t stay as they were worried about the weather closing in. We were so gutted! A couple of hours later though our guide got a phone call to say that we could, so all was good! We’re still not exactly sure if it was a weather thing as it didn’t look too bad from where we were sitting, but we got to stay which was fantastic! 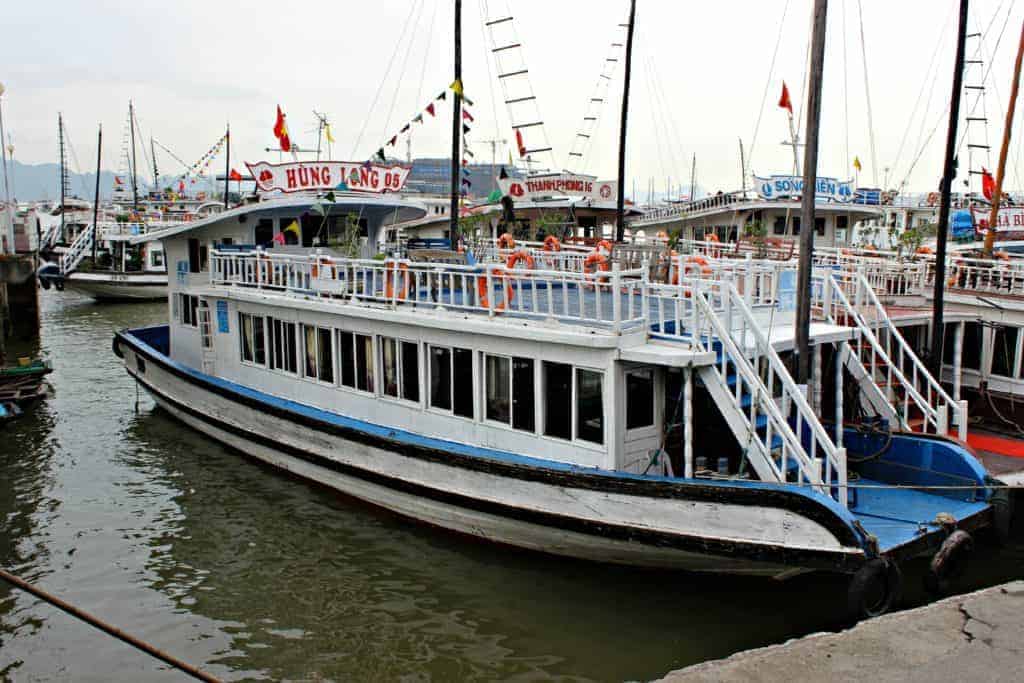 We spent a few hours cruising around some of the 2000+ islands and it was spectacular. Even though the weather was overcast & foggy we decided that the bay suited that atmosphere – it was kind of mysterious! 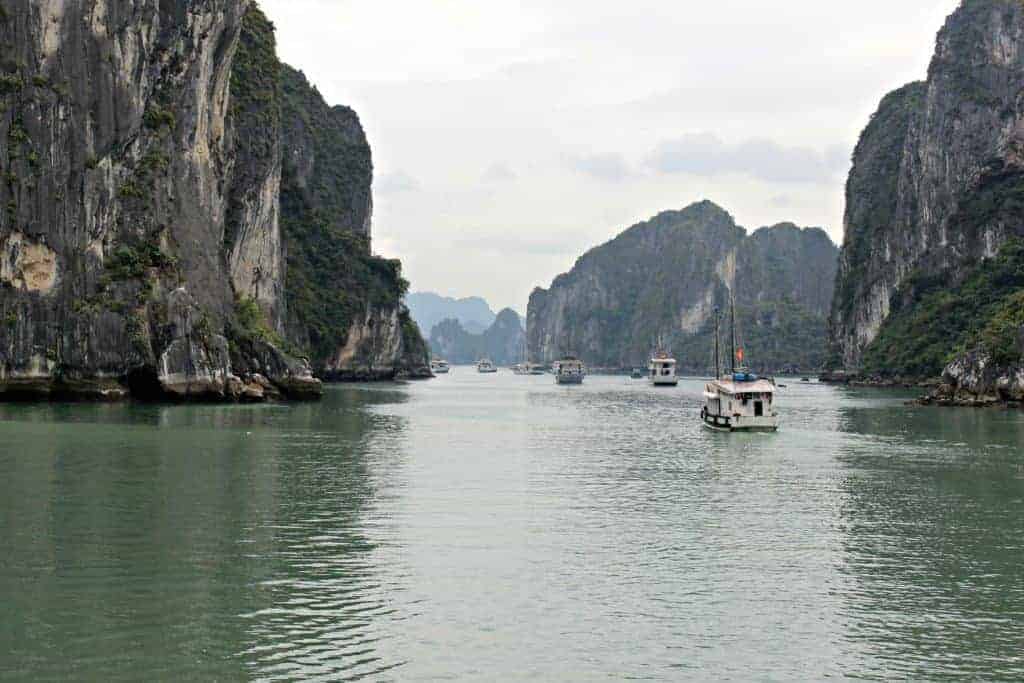 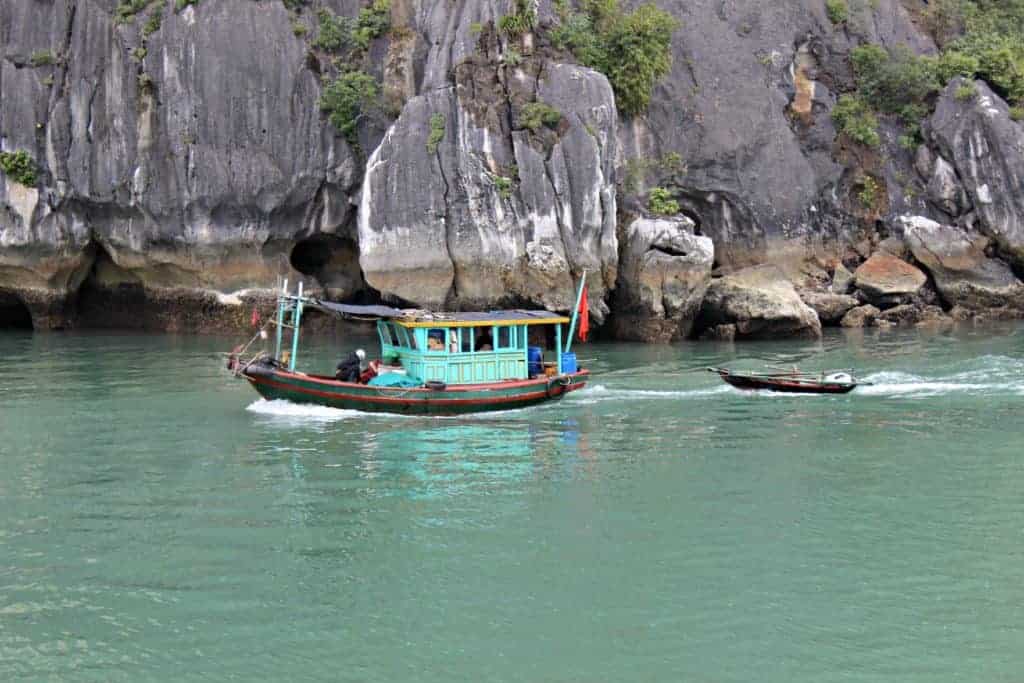 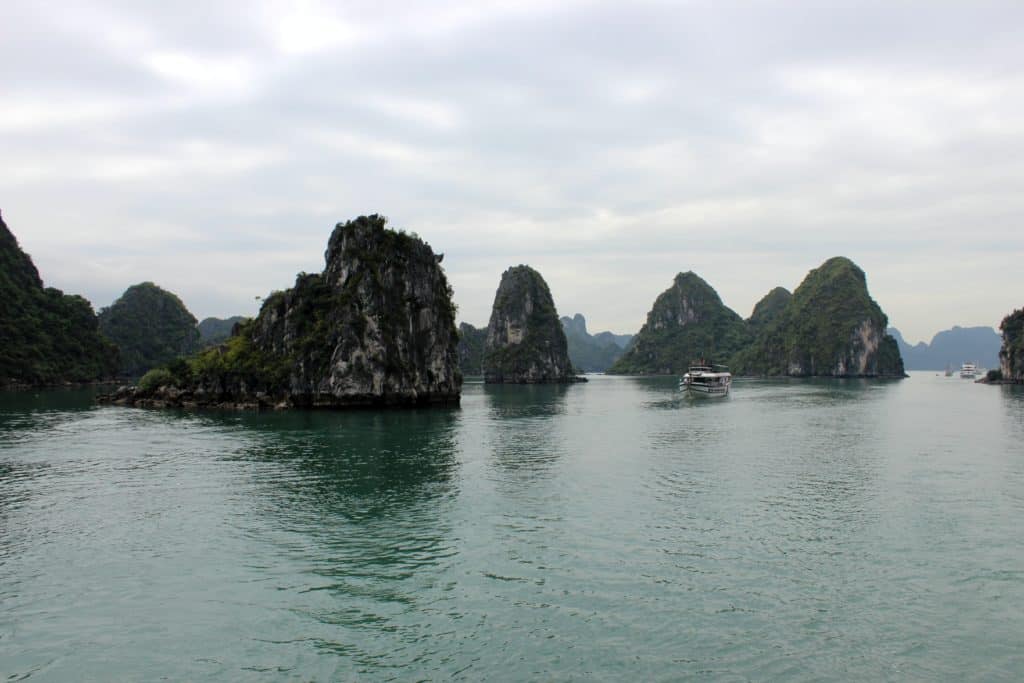 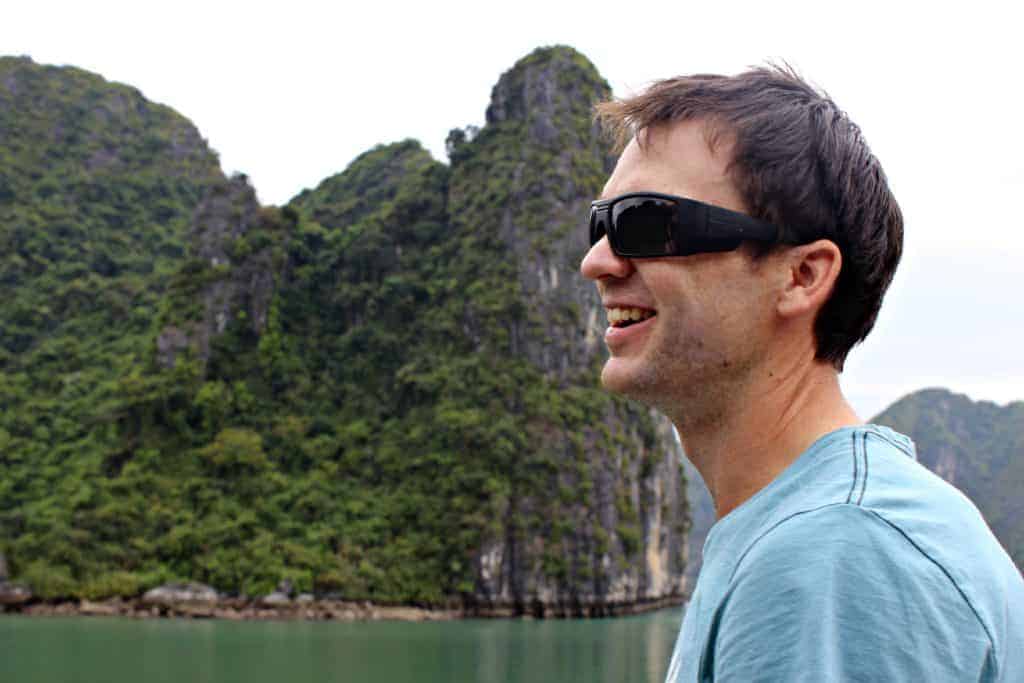 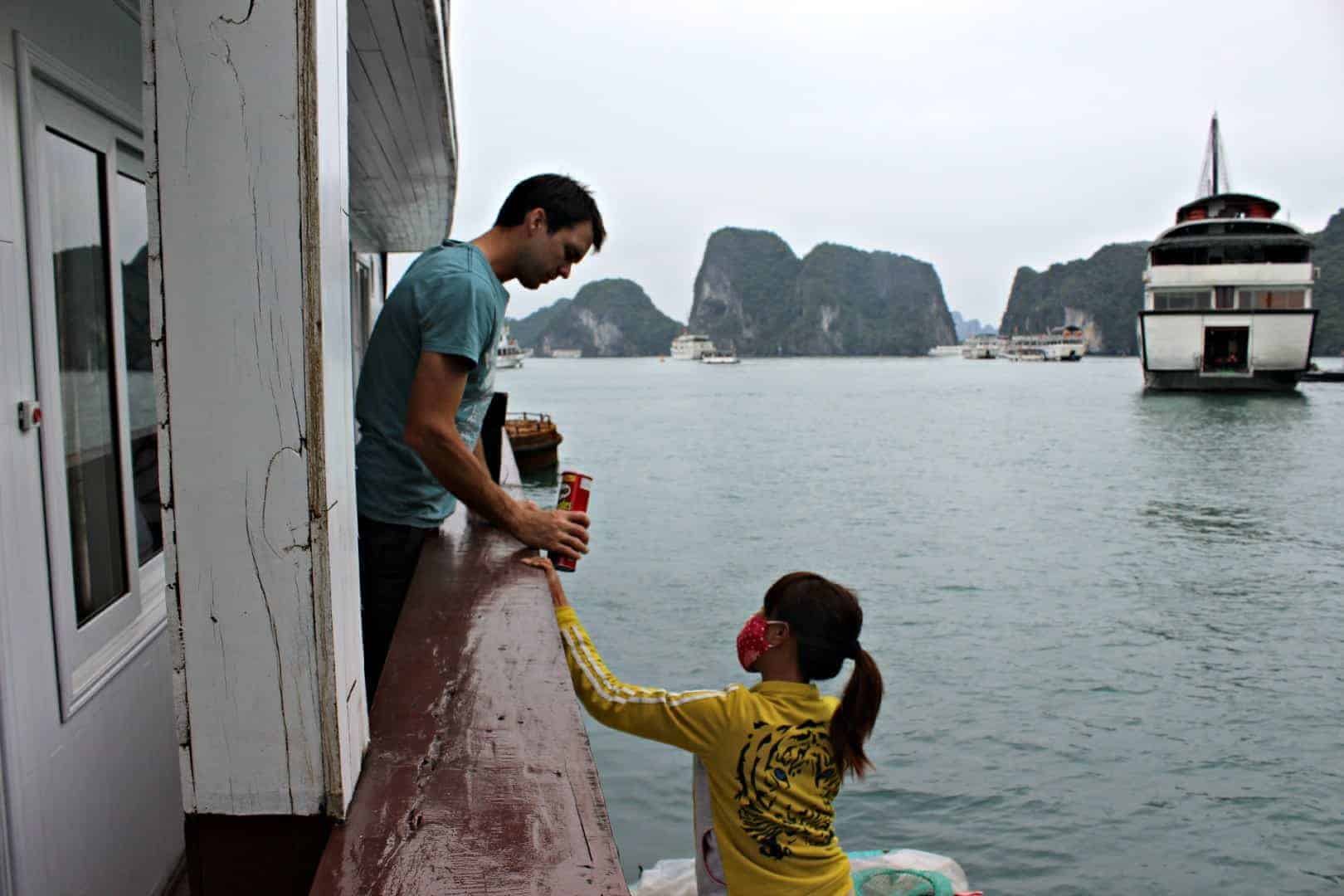 We moored the boat and took a smaller boat to what our guide called “The Amazing Cave”. It is also known as the Surprising Cave or Sung Sot Cave. It was HUGE! We climbed a steep set of stairs and were treated to a birds eye view of the bay, before disappearing into the cave which, believe it or not was both amazing and surprising! It was way bigger than I was expecting and was just incredible – the photos do not do it justice at all. 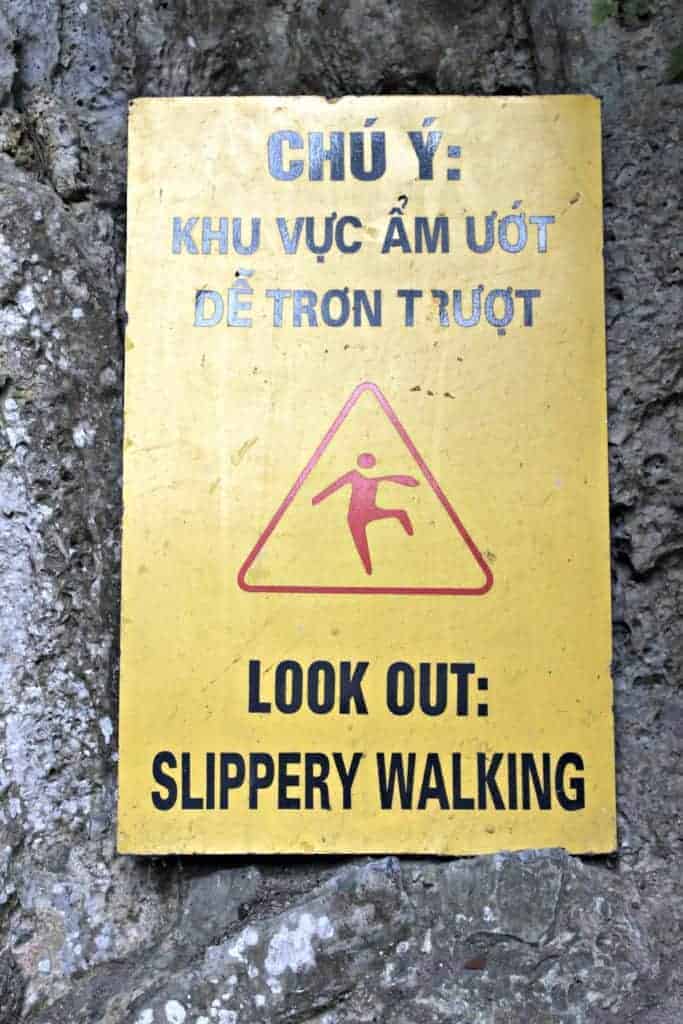 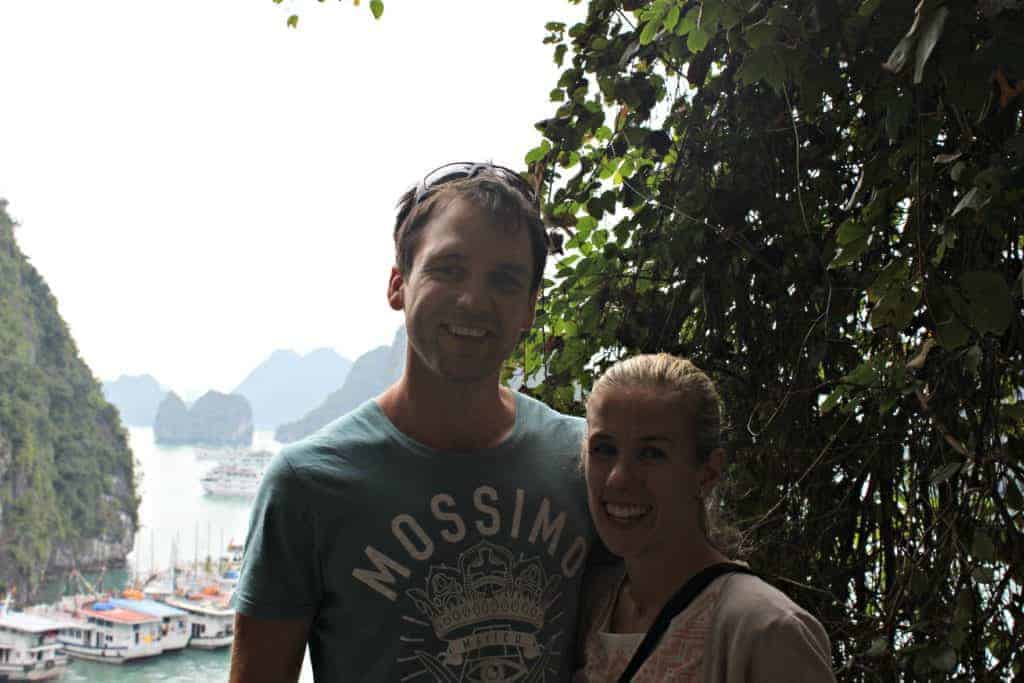 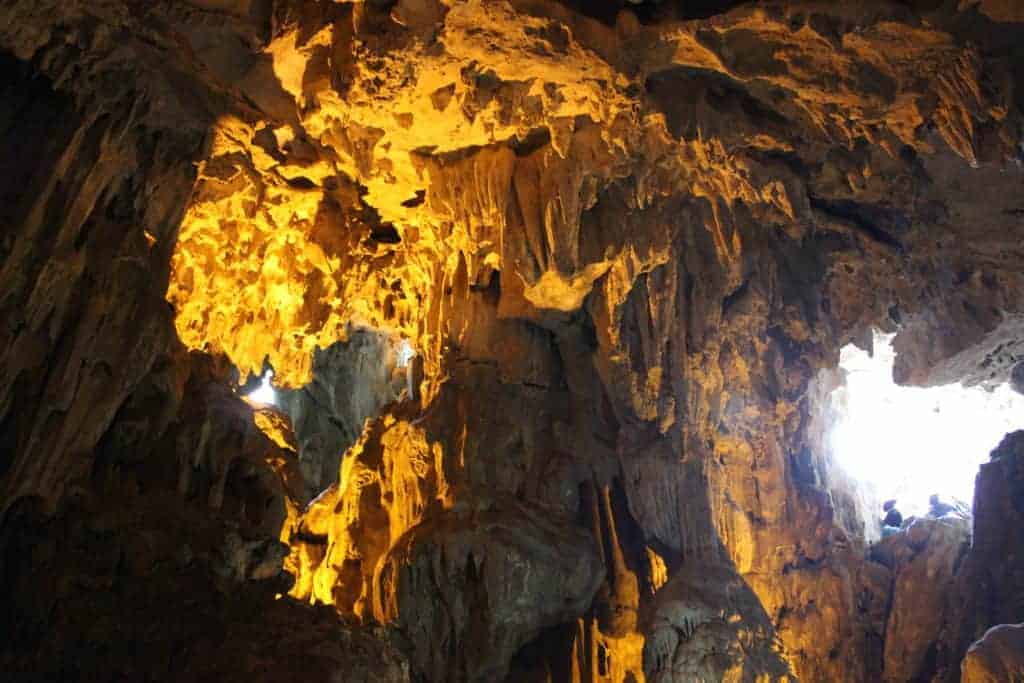 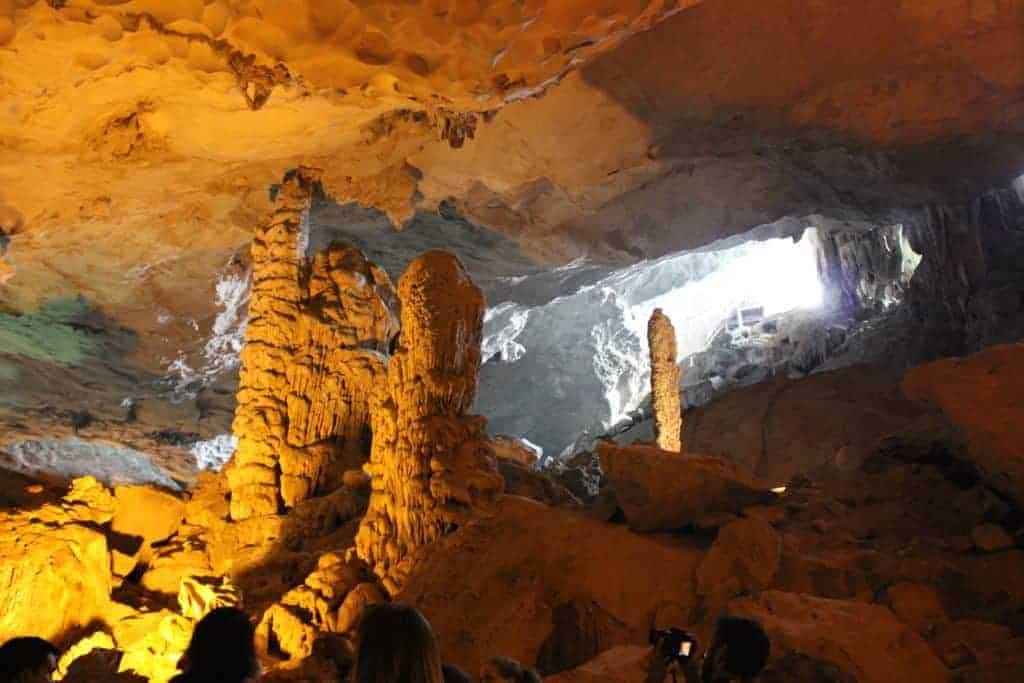 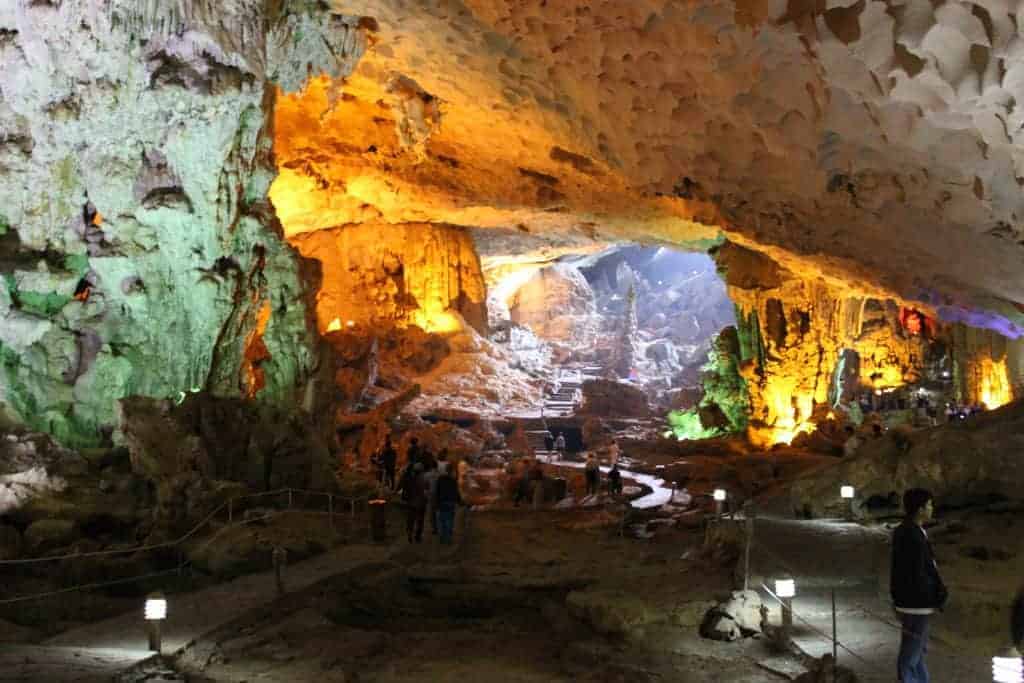 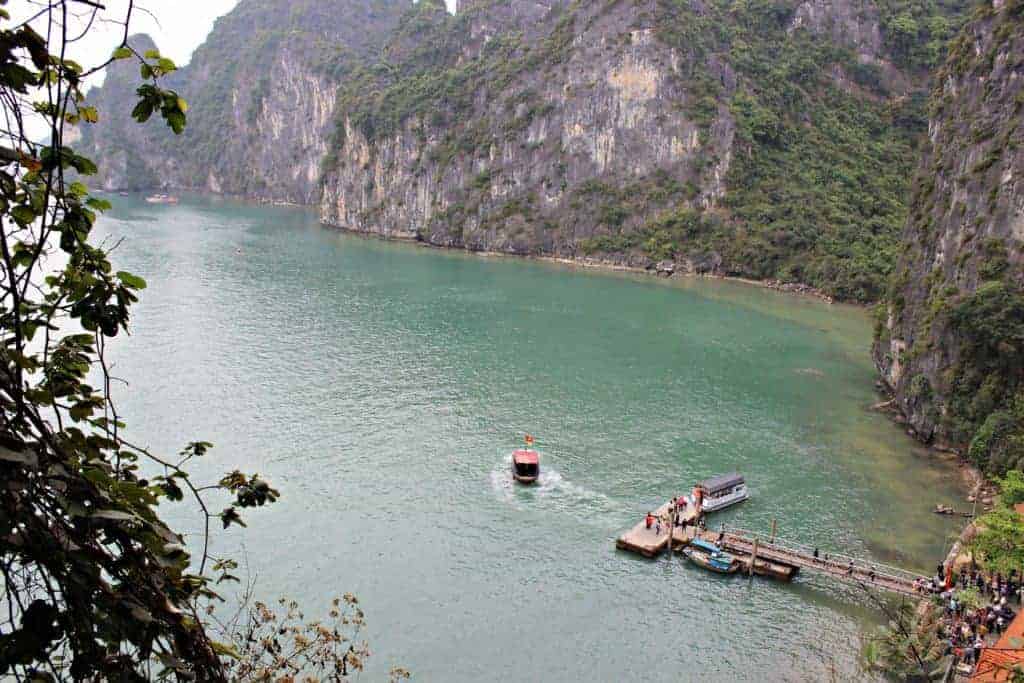 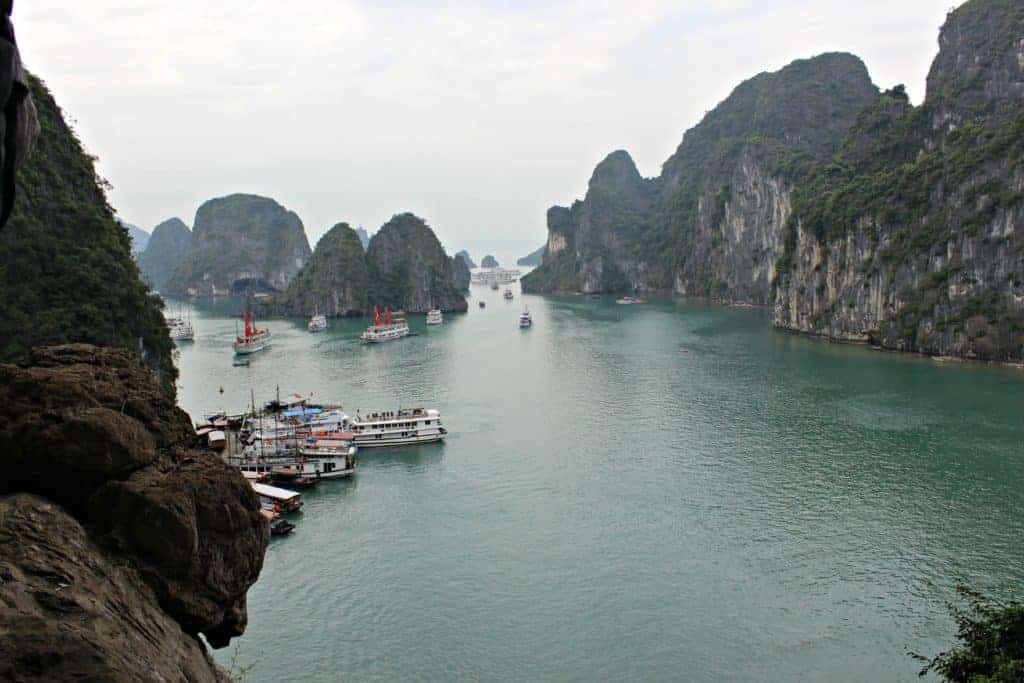 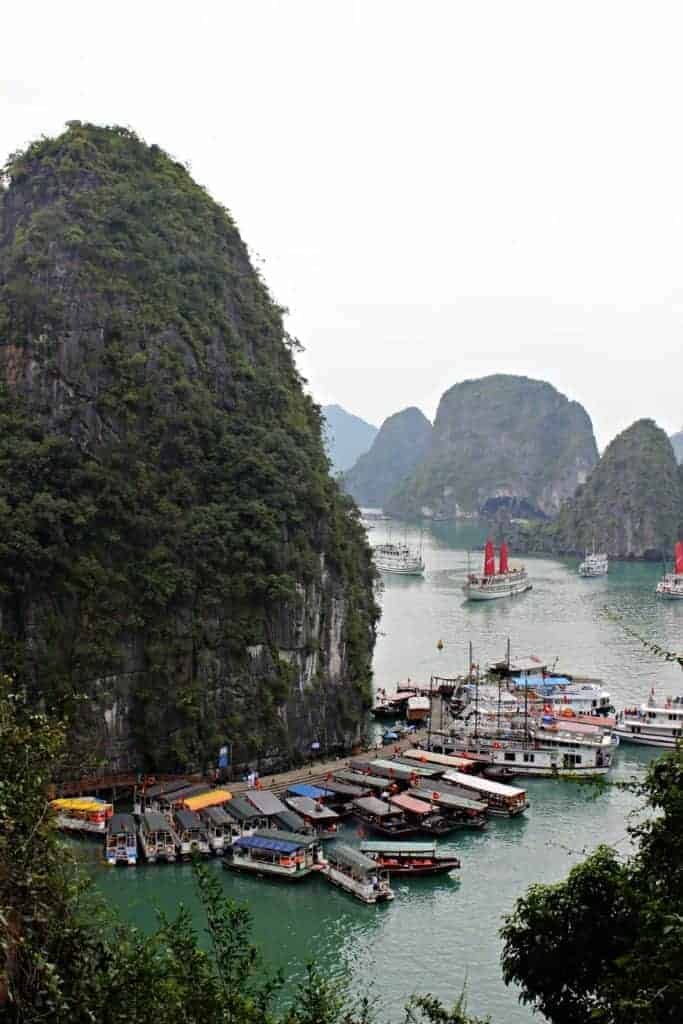 Once we left the cave we went back to the boat before going on an optional kayaking trip around the islands. We took the kayaks right into the middle of an island and spent about 20 minutes watching spider monkeys play! They were so cute and were jumping around on the rocks like they had velcro pads on their feet! I don’t have any pictures as I didn’t want to take my camera in the kayak (reeeeeally wish I had!) but believe me when I say, this was one of the highlights. Animals playing in their natural environment, in the wild is something that can’t be beaten.

After dinner we sang a little karaoke – a hugely popular activity in Vietnam – and discovered that Josh must be a closet shower singer as he was great!!

After a great nights sleep in the cutest little rooms we woke up to a stunning day. We were so lucky to see the bay in both the eerie fog and on a crystal clear day as they were so different but both equally beautiful. It was so nice spending the morning sitting on the top deck of the boat and soaking up the sunshine. 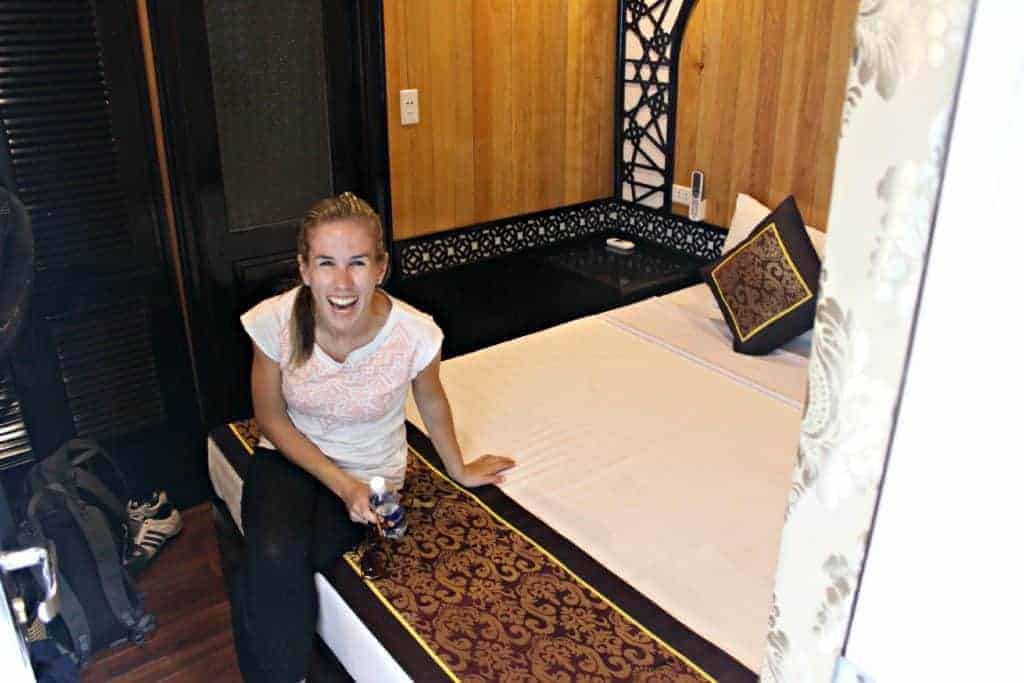 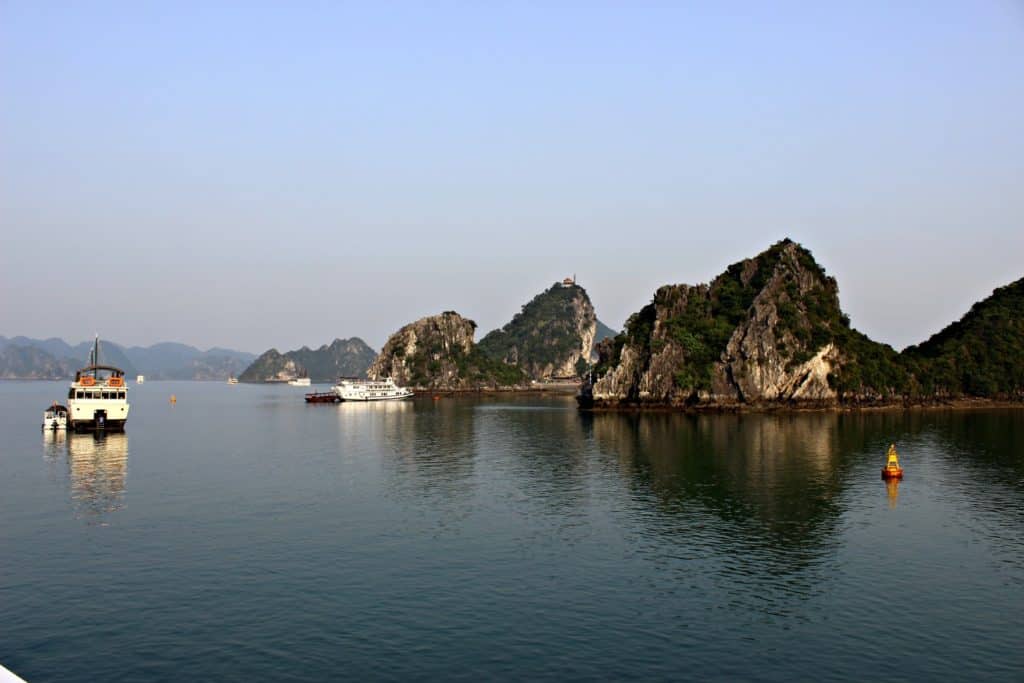 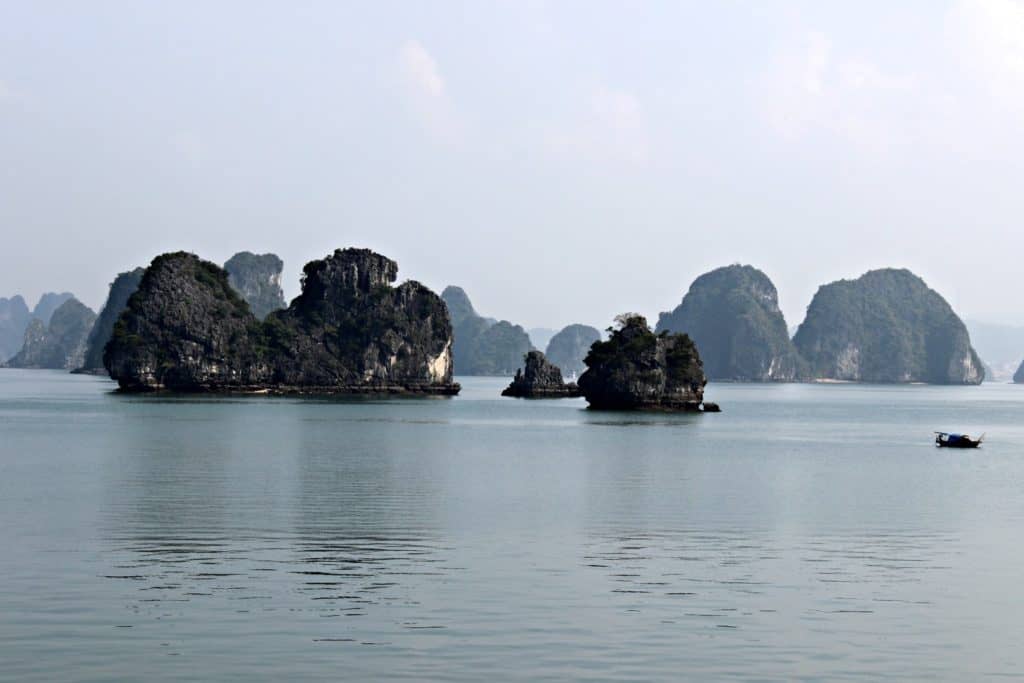 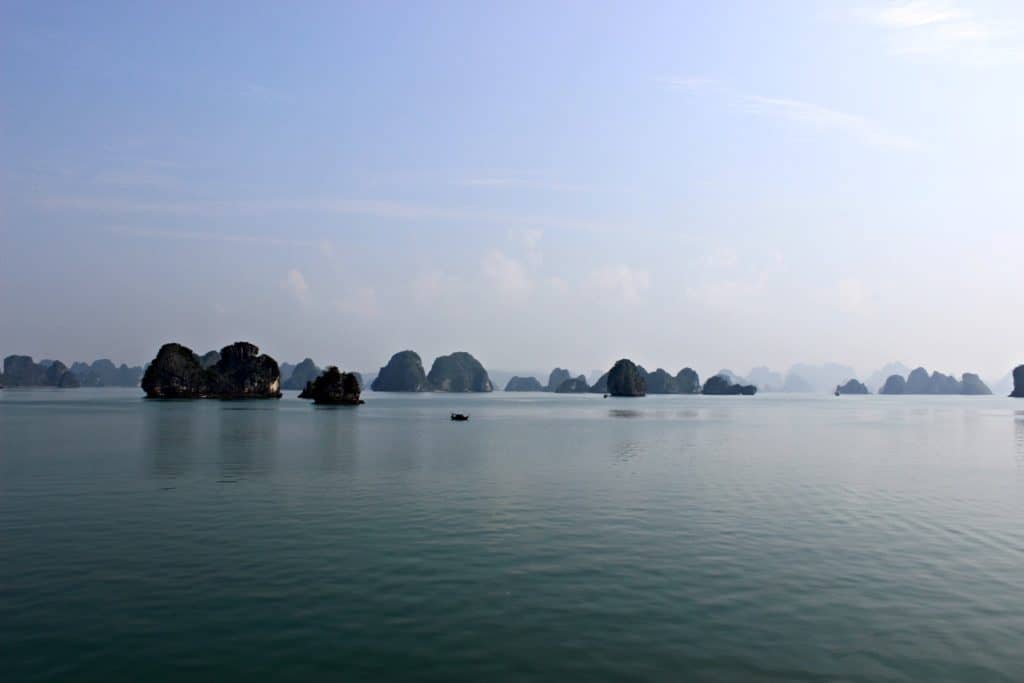 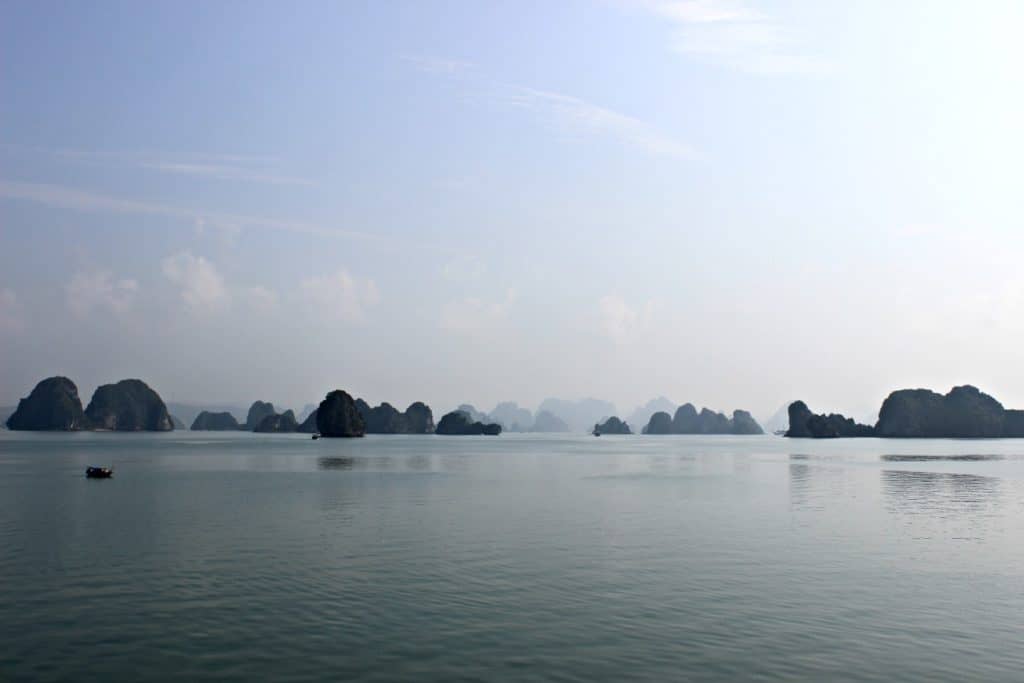 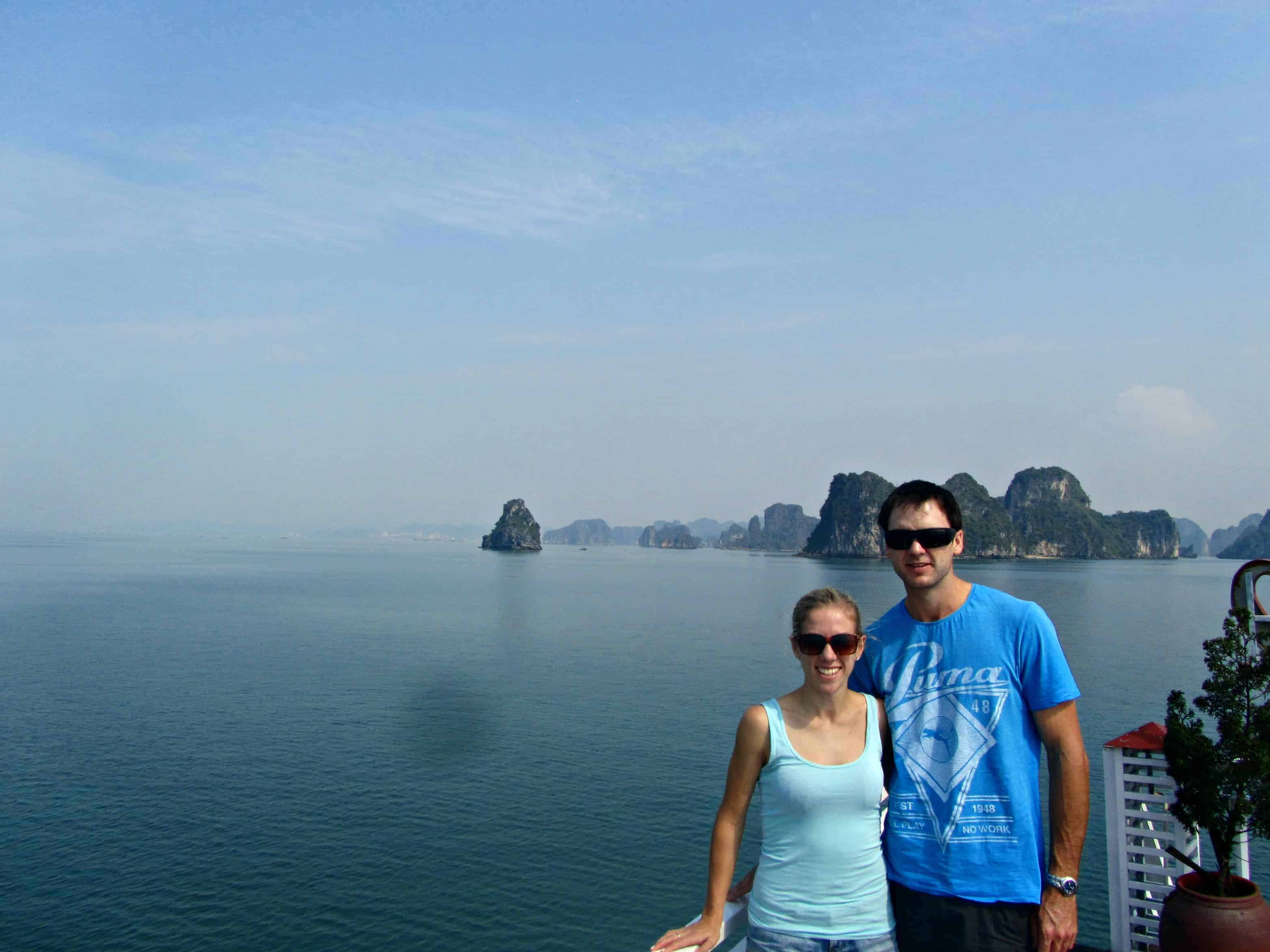 During our trip back we were taught how to make decorative carrot nets and radish flowers – something that the staff on the boat made look incredibly easy, but I’m 100% if I attempted this it wouldn’t actually look anything like it! 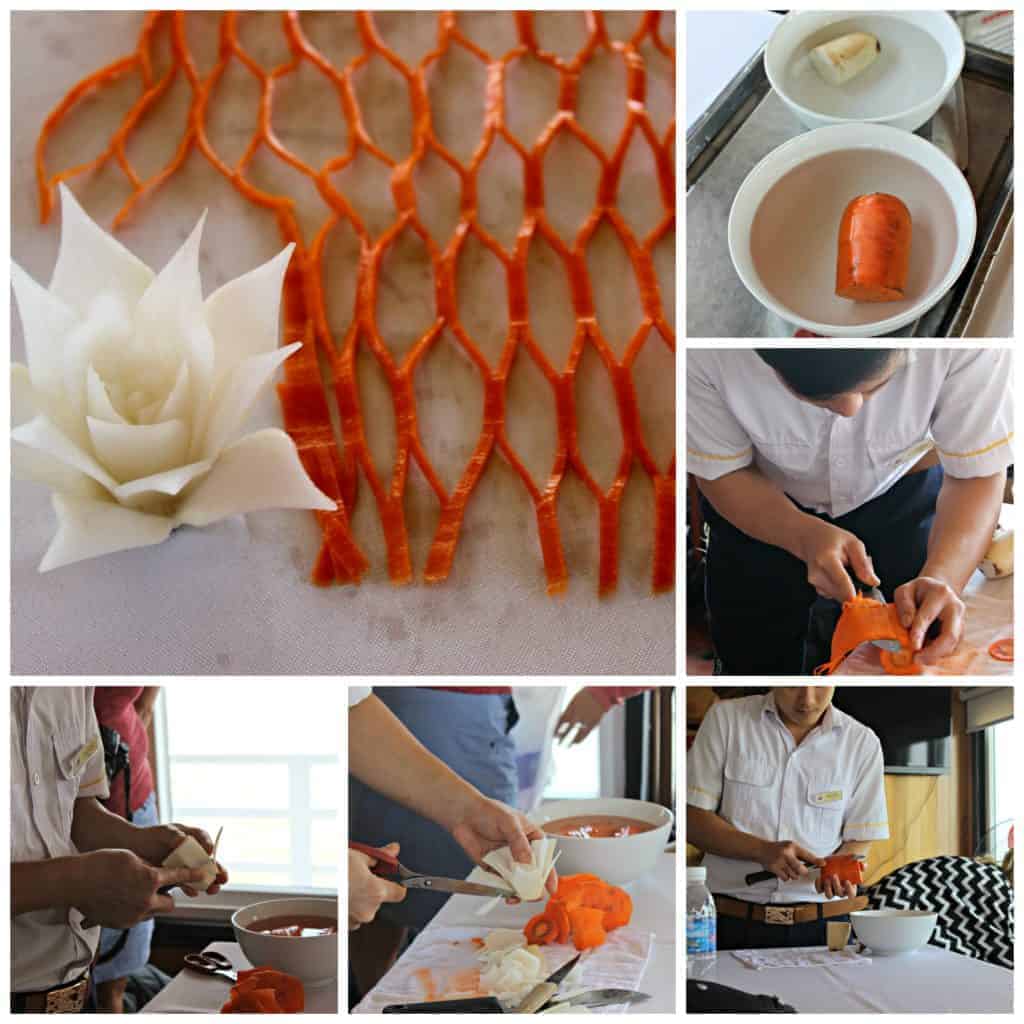 On the way back to Hanoi we stopped for lunch at Hong Ngoc Humanity Center, a handicraft outlet that takes in disabled young people and teaches them a craft – mostly embroidery but there are paintings, textiles, clothing and all sorts of bits and pieces. These students are unable to work in factories or in the fields due to their disabilities so this Centre gives them a positive future. 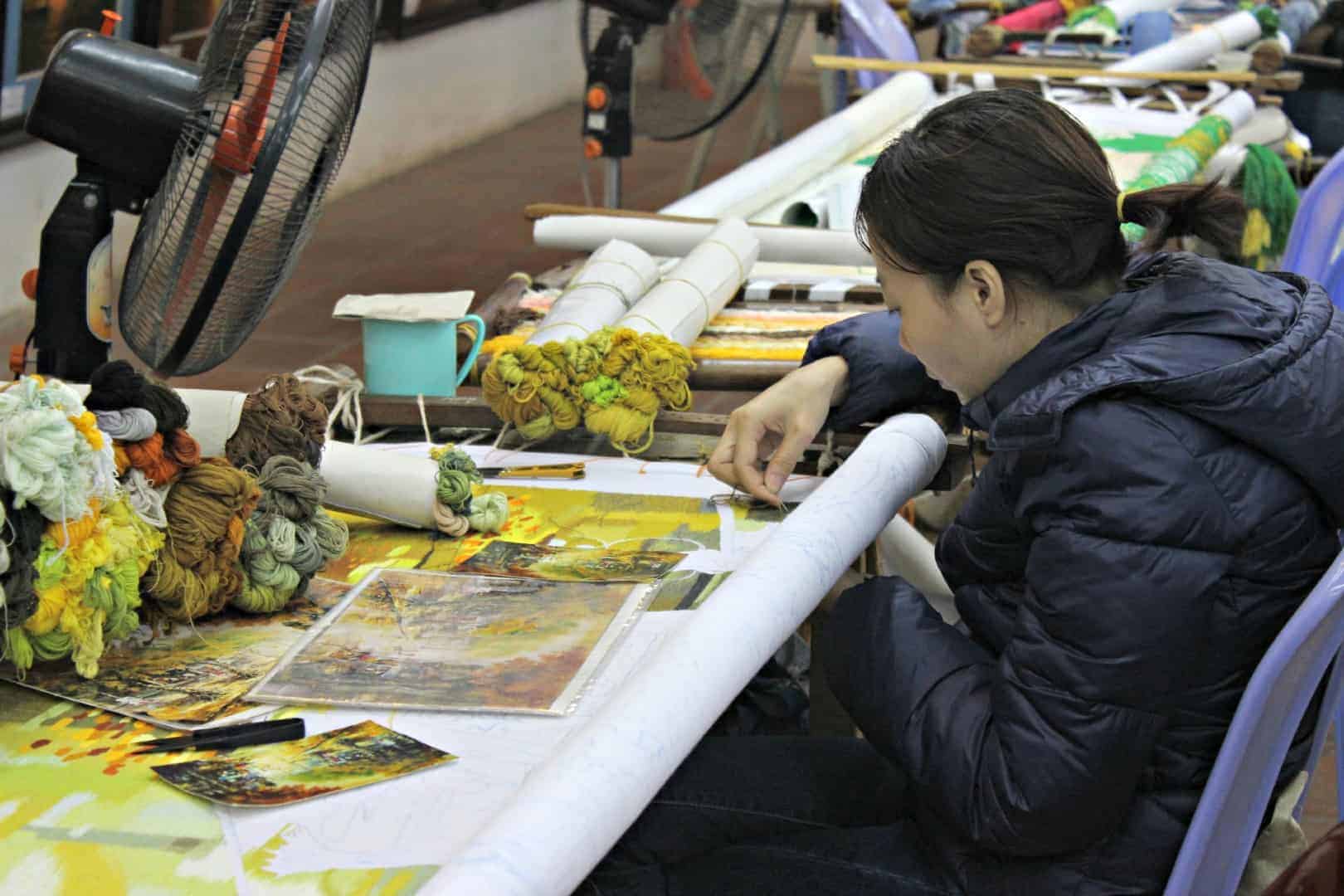 Halong Bay was a very relaxing couple of days and I would highly recommend making the trip there if you are in Hanoi. It was a complete contrast to the business of Hanoi and allowed us to see how diverse this country is! 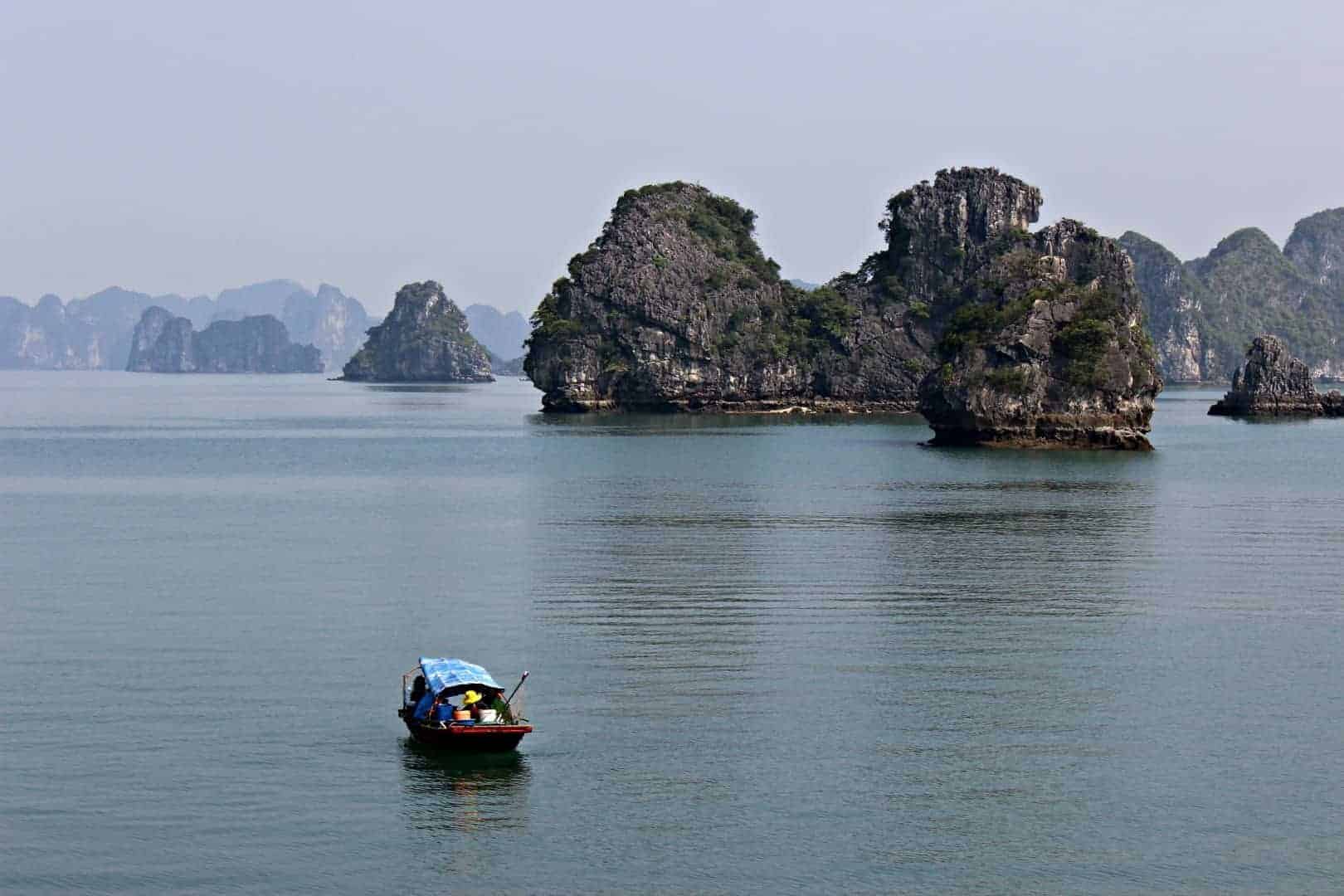