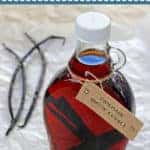 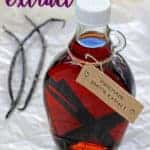 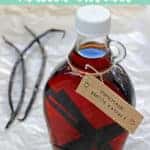 How to make Homemade Vanilla Extract - all you need is vanilla pods, vodka and a glass jar - an easy and cost effective way to make your own delicious vanilla extract. 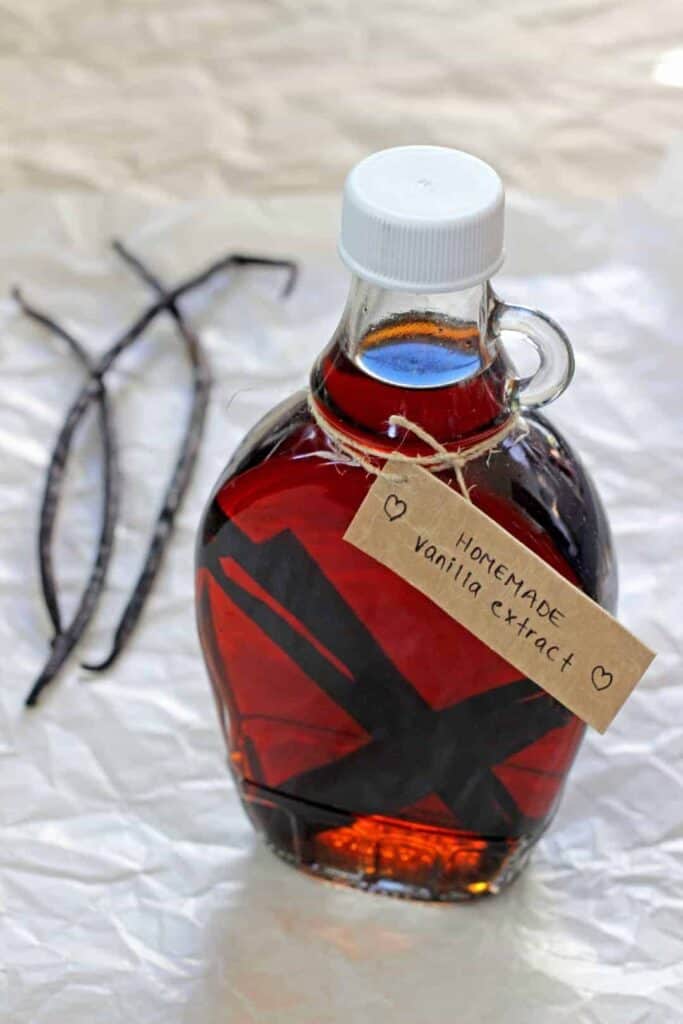 Something I have noticed over the last few months is just how many things it is possible to make at home that I had never even thought you could!

My new philosophy is, if you can buy it at the supermarket you can probably make it, and if you can't make it, you probably shouldn't be eating it! Speaking strictly about packaged things though - there is no WAY I'm going to be growing wheat to make flour. Not in this lifetime anyway!

So far I've made some pretty exciting stuff that I would normally have just bought. A lot of things are definitely more convenient to just buy, although I try not to, but the best recipes I have found are those that are super easy and that I use all the time.

I have never bought vanilla extract. Growing up we always had vanilla essence in the pantry so that was just what I knew. Plus, vanilla extract is super expensive - especially if you bake as much as I do.

And now you can make your own! All it takes is 3-4 vanilla pods, a little vodka, a glass jar and a bit of patience.

Tip: Before buying vanilla pods, shop around. The ones you find at the supermarket are small and can be quite dried up. I actually buy mine from Trademe and there are many online retailers around NZ. 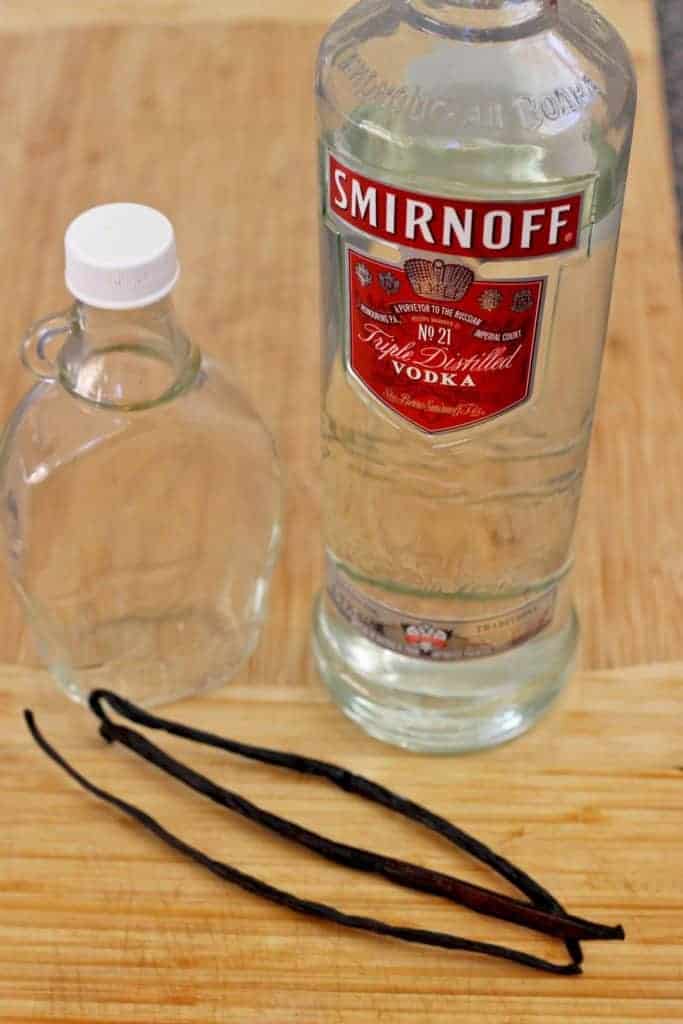 Split the vanilla pods lengthwise and scrape out the seeds. I keep the seeds in a separate container and use them in recipes - they're great in homemade vanilla ice-cream and as an extra vanilla hit in cupcakes! 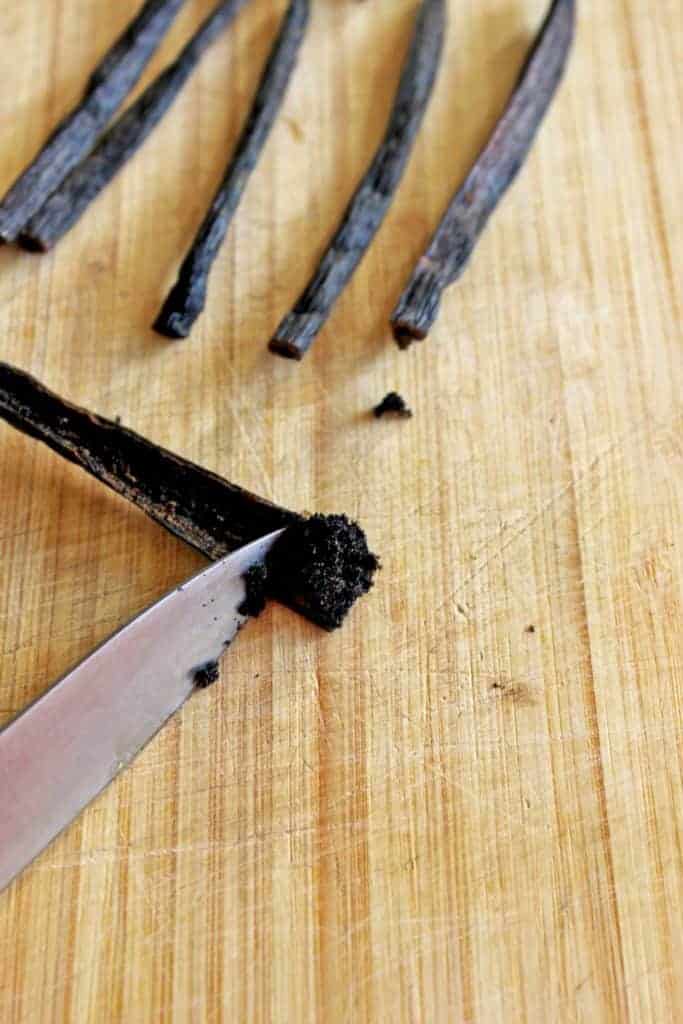 Put the pods in a glass bottle or jar and top up with vodka. I used Smirnoff as it's what we had in the cupboard but any vodka would do. I have heard mixed reviews about using bourbon or rum instead of vodka which I have yet to try but I think I would still choose vodka as it is more neutral and won't take away from the vanilla flavour.

In terms of the jar, I like using my old maple syrup bottles, solely because they are cute! When I want to make a bigger batch though I will use a larger jar, such as one that had pasta sauce in it, and will add more vanilla beans accordingly. I work on using 3 vanilla pods to 250ml of vodka. 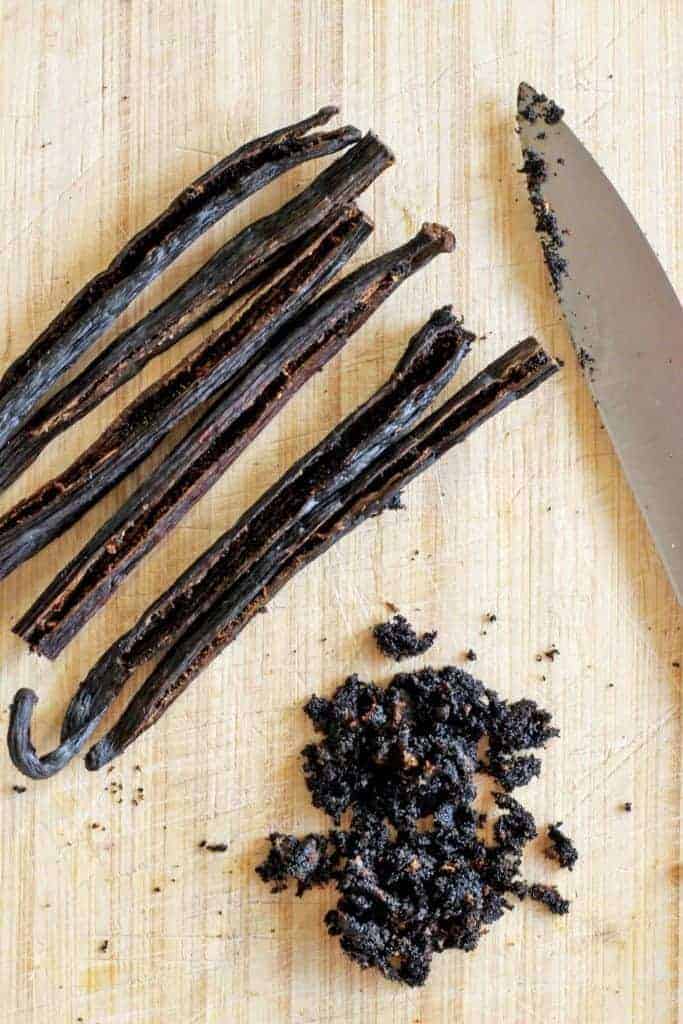 Store in a cool dark place for about 6 weeks, shaking every now and then. Here is what the process looks like.

Day 1: Nothing but a couple of pods floating in some vodka! 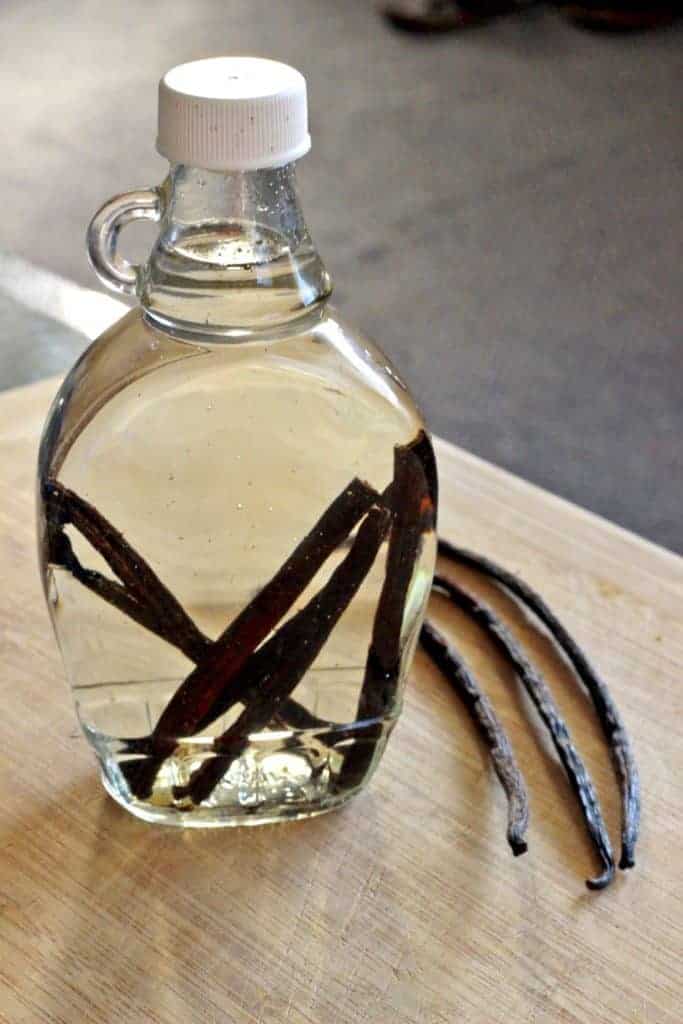 Week 1: You can see that the vanilla is starting to be extracted. Kinda sunsetty right? It's puuuurty. 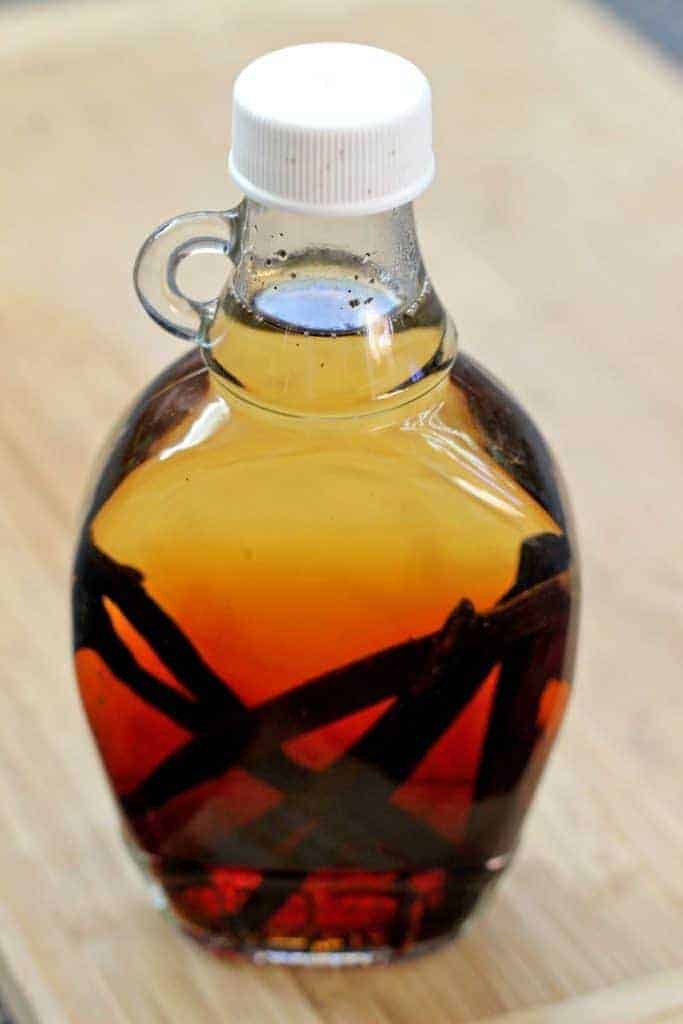 Week 2: The extract is developing a nice amber colour 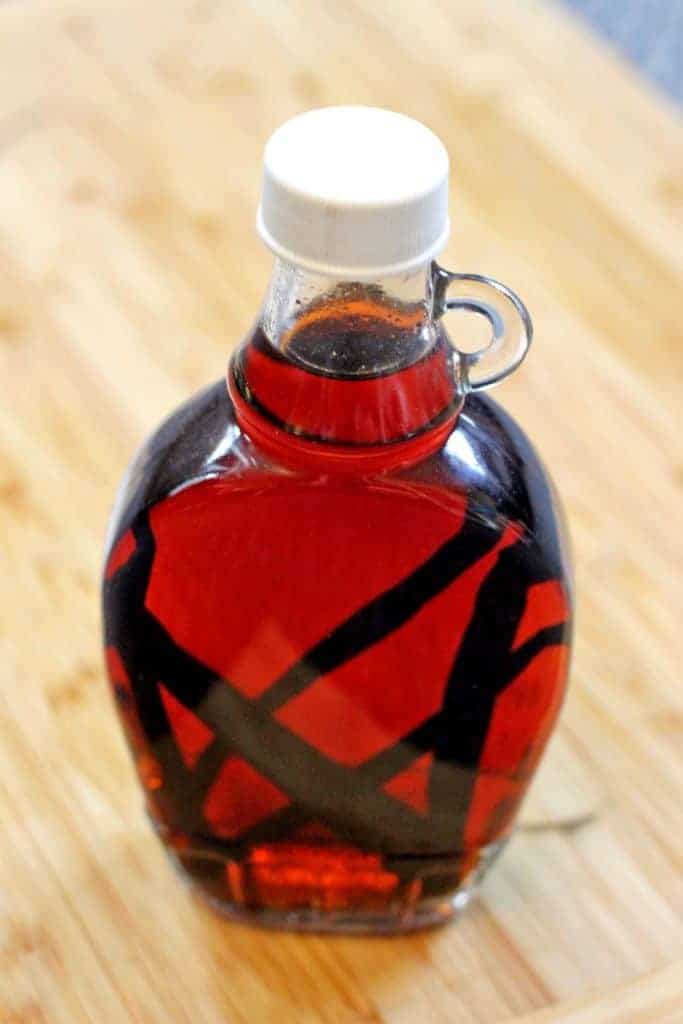 Week 3: It's starting to look (and smell) pretty good! 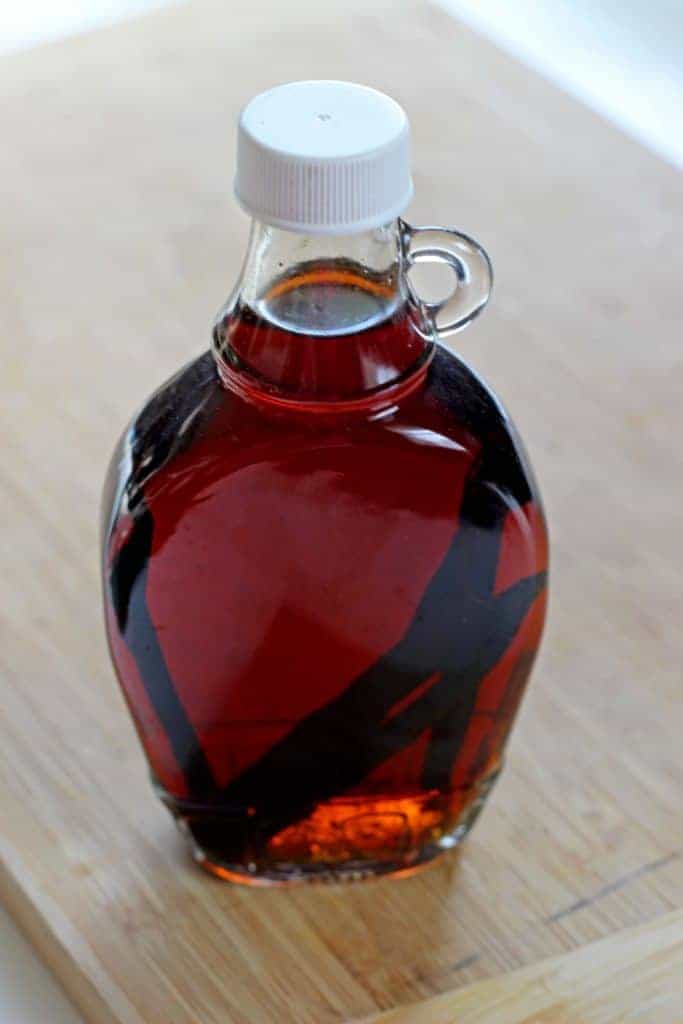 After 6 weeks the extract will be ready to go! Use it yourself or put a cute label on it and give it as a gift.

Tip: The vanilla pods will keep going for a while so you may top up the jar with more vodka when you need to. I try not to do this too often as I like to keep it as strong as possible but if I know I won't be using it for a week or so and the bottle is no less than half full, I might top it up a little! 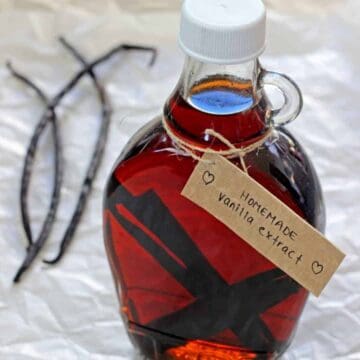 You can adjust the number of vanilla pods used depending on how much you want to make. Vanilla extract will keep indefinitely, so it is quite alright to make a large batch and store it for a long time.
5 from 2 votes
Print Pin Rate
Prep Time: 5 minutes
Author: Laura