Classic homemade eggnog - the perfect festive drink! Cooked and uncooked versions of this simple recipe and the option to make it spiked for the grown ups!

This post was originally published in December 2015 – it has been retested, rephotographed, rewritten, and republished (to make it better for you!) in November 2020.

Saturday was our end of year dance show. It was a whole week of dancing every night after work plus late night rehearsals Thursday and Friday and then the 2 shows on Saturday, so by Sunday I was well & truly tuckered out. Especially considering the dressing room FULL of teenage girls I was in! Phew! But after a big sleep in, cookies for breakfast, redecorating the tree because it fell over, catching up on a week's worth of advent calendar chocolate, cookies for lunch and then 1 glass of substantially spiked eggnog (it was the afternoon) I was feeling pretty festive!

I had never even heard of eggnog until a few years ago. I had it at a Christmas party we went to when we stayed with my Aunty & Uncle who live in the US and it was a life-changing moment. Since then, eggnog has been compulsory on Christmas Eve. It is just plain delicious. Creamy, spicy, boozy & somehow refreshing. The perfect drink for family time.

Are the eggs raw?

The eggnog version I usually make is uncooked, so worth keeping in mind if you are sensitive to uncooked eggs, although both my kids drink this with no problems and I have also had it while pregnant (just obviously without the booze!) I use the eggs that our clever chooks lay so I know that they are fresh, but if you would prefer to cook it, the instructions are in the recipe card.

Yes! Eggnog usually contains rum or bourbon but it is also easy enough to make this non-alcoholic...just leave it out! My kids both love this as a milkshake type drink!

I usually use dark rum in my eggnog but you can substitute bourbon for rum if you would prefer and after talking to a friend, we decided that vanilla vodka wouldn't be a bad idea either!

The recipe can easily be halved for a small crowd or doubled for a party and if you have leftovers you have to try these Eggnog Snickerdoodles or simply put it in an ice cream churner (or just in a freezer proof container) for the best eggnog ice cream! 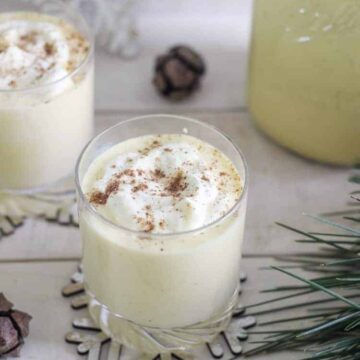