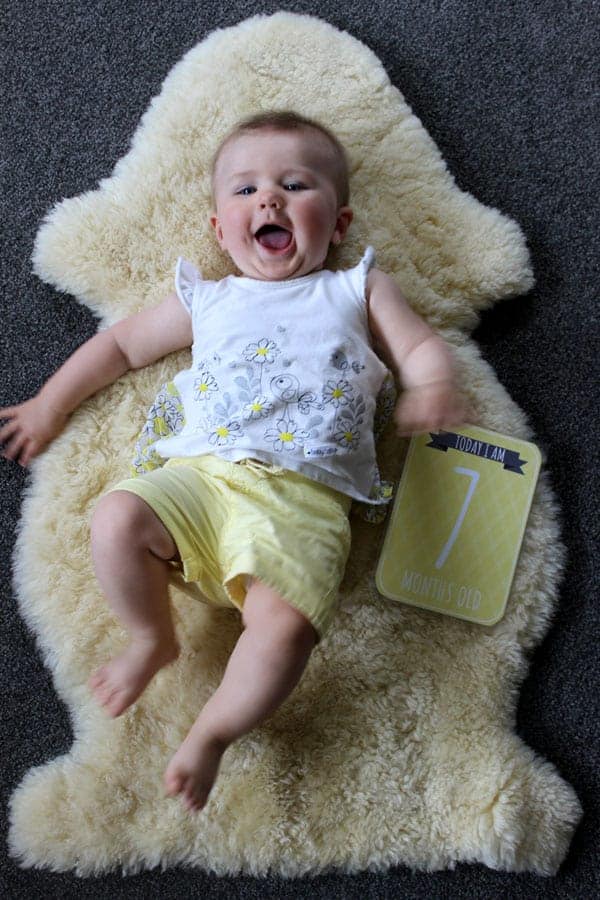 I thought that I would do 2 monthly updates from now on but wow, it has been an action packed 2 months!

December with Sadie was pretty much all about Christmas! Having her around made Christmas even more exciting and I went way overboard with the Christmas outfits! It was fun taking Sadie on her first trip to cut down our Christmas tree - she was more interested in the tree than the camera of course!

And this year we have started a new tradition - on the 1st of December she will get Christmas pyjamas and a new Christmas story that we can read for the month! 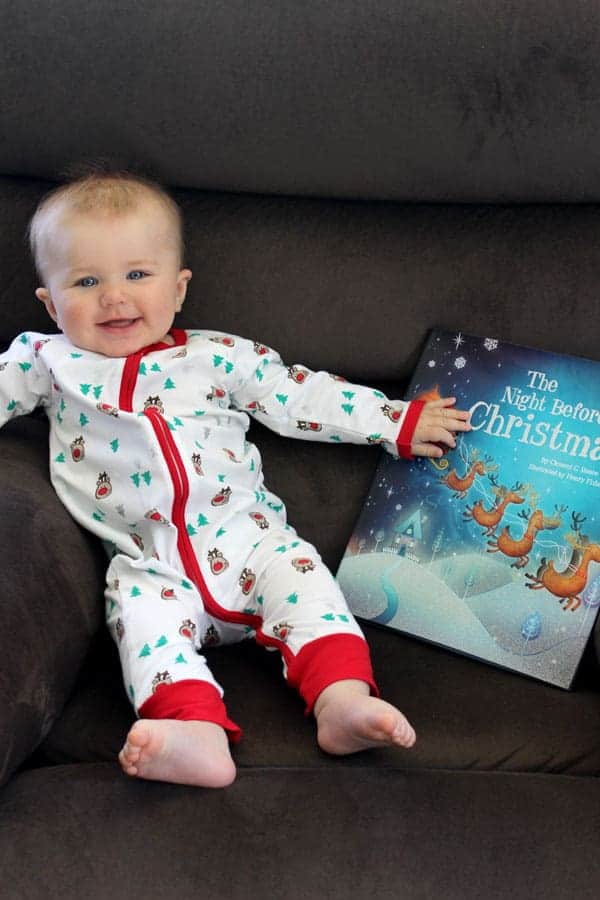 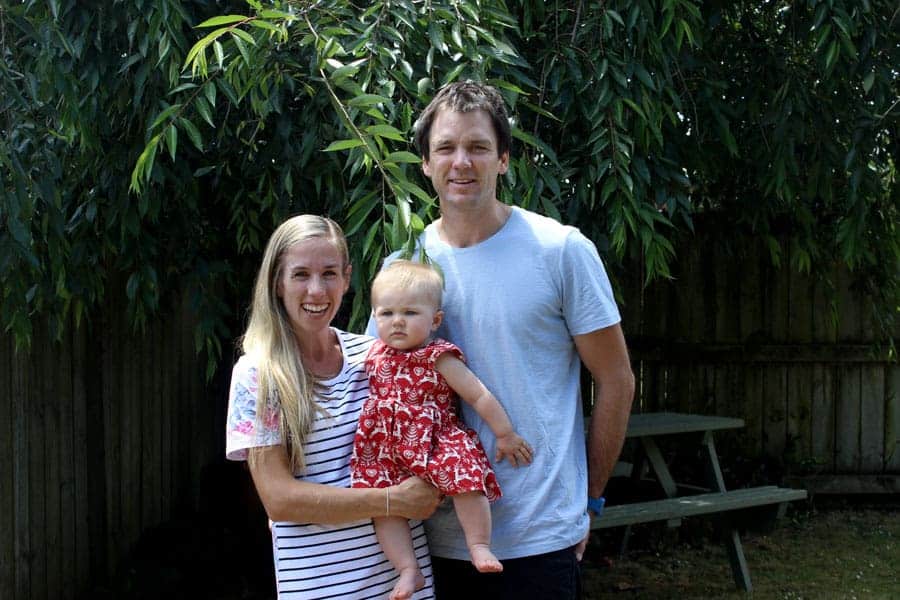 We had such a fun few days with both sides of the family and Sadie just loved it! Josh & I made her a swing for her present which she LOVES! We've put it in the paddock so she can watch the animals...she will happily sit in it for ages! I'm planning on sharing the tutorial for how to make it later in the year...it was so easy and it's the best baby swing! 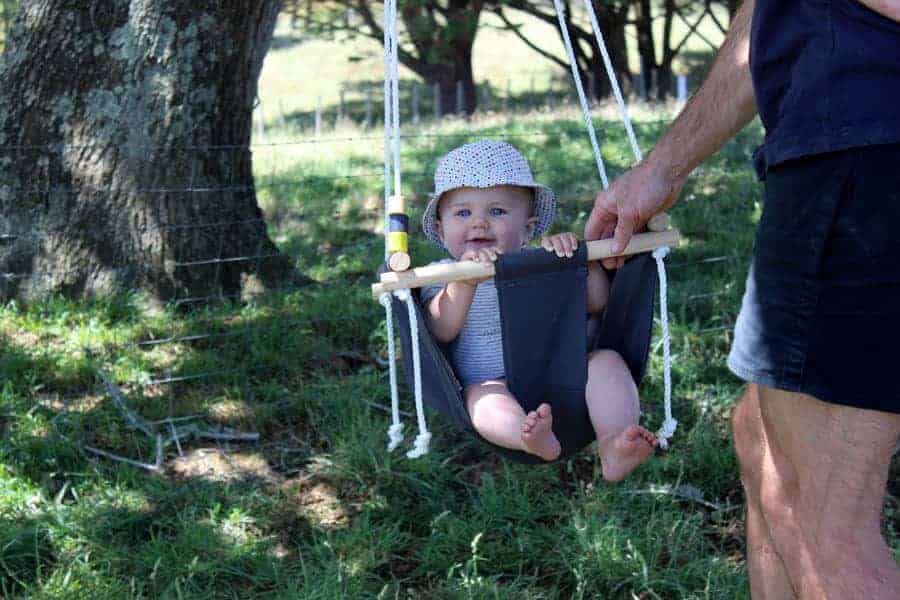 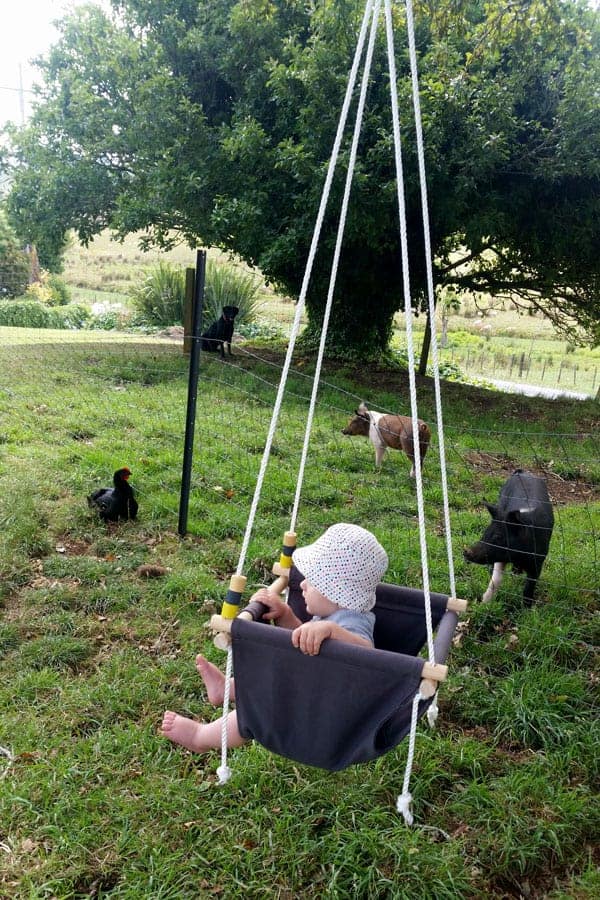 Sadie is still such an active baby - just like her Dad, she can't sit still for 5 minutes! Between 6 and 7 months she started spinning around on the floor and pushing herself backwards and I thought that she was going to skip crawling and go straight to walking...or dancing as she was (and still is) so happy when you hold her up on her feet (or when she is in the jolly jumper) and goes crazy, especially when there is music playing! But just before she turned 8 months old the girl figured out how to crawl! She started out by doing a couple of crawls and then sitting down. and then getting up on her hands and feet and doing a sort of downward dog style move and then sitting again, but now she's away! 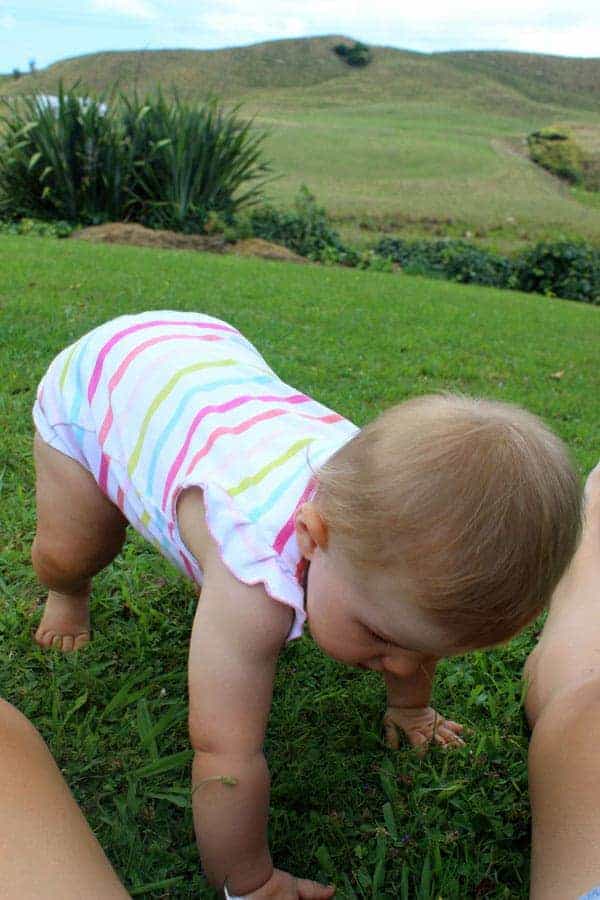 Everyone told me that life would get a lot more difficult once she started moving but I have to admit, I am loving it! Yes, I have to work harder to keep an eye on her and vacuuming the house has now unfortunately become a twice weekly activity, especially as there are so many flies around at the moment, but she had been getting so extremely frustrated at being stuck and that has completely disappeared now! So I'll take a moving baby over a screeching frustrated baby any day!

Sadie has just started to get the hang of eating solid foods. It's been a slow process but I'm not rushing it. Sadie chops and changes between preferring to have whole pieces of food to play with or purees, so I usually give her both and she eats what she wants. Her favourite purees are chicken & silverbeet, avocado & pea and lately, kumara (sweet potato), coconut milk and curry powder! Her favourite finger foods are rockmelon, strawberries, steak and avocado. So far she hasn't really turned up her nose at anything, she just doesn't eat a lot of food all at once and certainly lets me know when she's had enough. I had definitely underestimated how messy feeding a baby could be though. All I can say is that I am so happy it's summer...we take the no clothes option and just let her get food all over and then either bath her straight after or give her a bit of a hose down in the shower! Because it's been so hot we've been giving her ice-blocks...this is her "it's so cold" face. 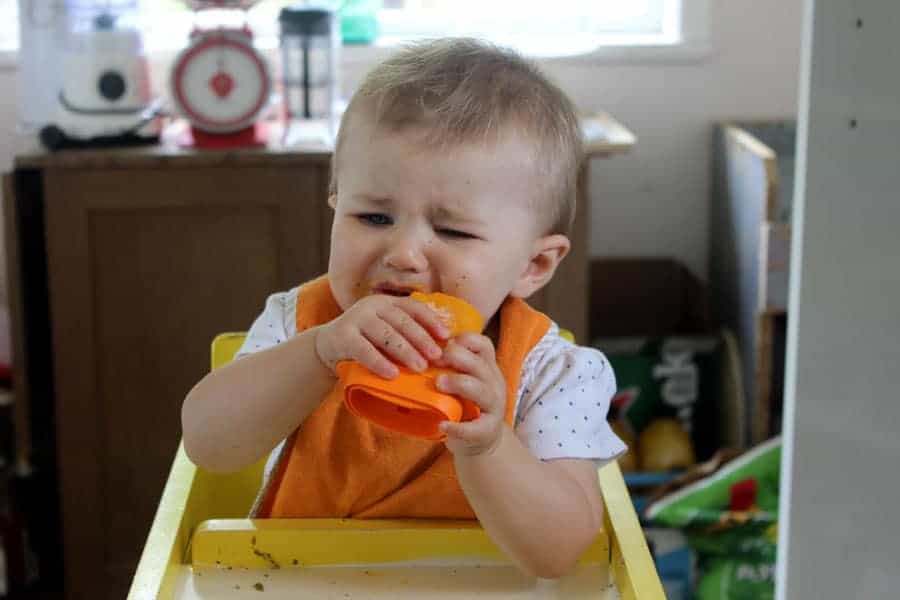 Around 6.5 months Sadie went through a bit of a stranger danger phase...mostly with men. She met Santa and was thoroughly unimpressed and also had a few issues with her uncles! Thankfully she got over this in only a couple of weeks and is now back to being happy being passed around anyone who is familiar to her.

The other big thing that has happened over these 2 months is Sadie's sleep. As you will remember, Sadie stopped sleeping through the night and started waking around 3 times per night with the only way I could settle her being to feed her. This was ok and I was coping with the broken sleep but over the course of a month she started getting progressively worse and suddenly 3 wakes overnight was a good night. So about 2 weeks ago we decided we'd had enough and that we needed to do something about it - she wasn't really feeding overnight, it was more just comfort and her day sleeps were suffering a bit too. I had also slipped back into feeding her to sleep, so we brought her bedtime forward, started waking her in the morning so that we could have a more scheduled day, started putting her down awake and trying to settle her in her bed. The first night took us a long time to settle her initially but then she only woke twice and both times we were able to settle her in her bed. Since then she has got better and better and has even slept through the night 2 or 3 times! The difference is amazing! She seems much more settled, is sleeping really well during the day and the nights are just so much better. There are definitely times that I will still feed her - often she will go through til 3 or 4am and then is unsettled, so I get her up for a feed at that point, but other than that we can generally pat her back and sing her back to sleep. 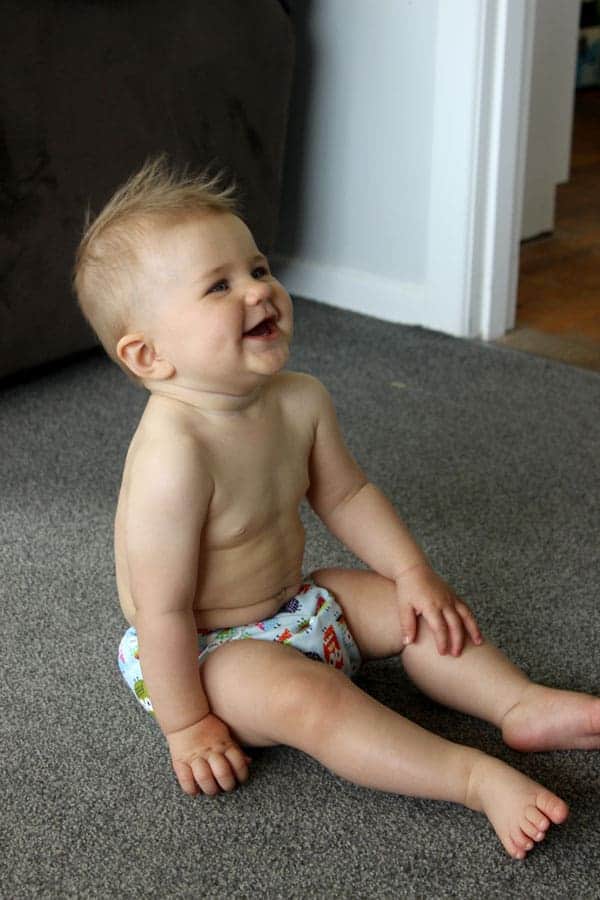 But the best thing about this is that my Mum and sister took her while Josh & I were at a wedding over the weekend (Sadie's first wedding!) and she was a champion for them! She took a bottle, went to bed well and slept through until 4am by which time we were back at Mum's and I could feed her. It was awesome having a night out with Josh and this, as well as me having the day away from her the weekend before has been a real game changer...I am confident now that she is ok without me and I am ok without her! 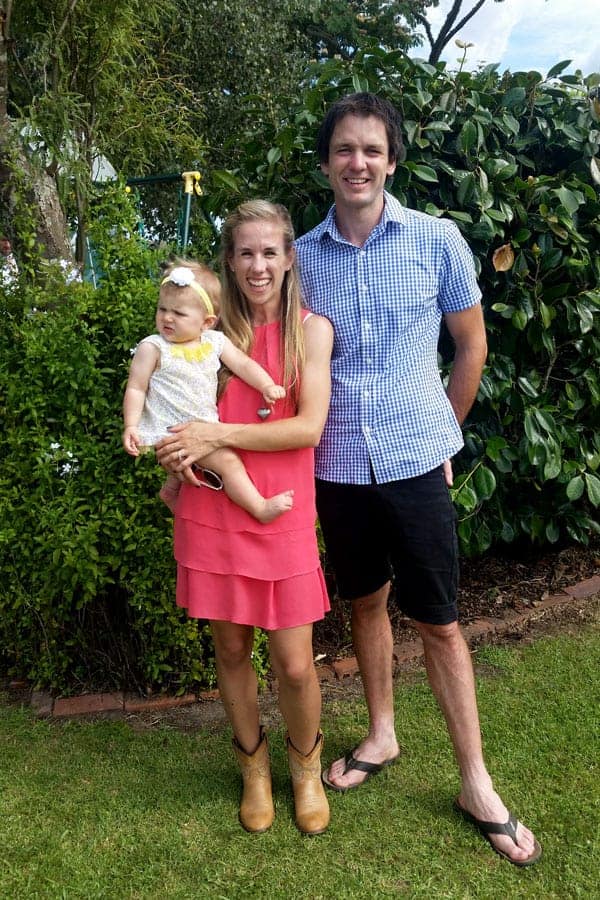 Sadie has also just cut her two top teeth...she's starting to look more like a little kid and less like a baby every day! We also took her on her first trip to the zoo and her first swim at the beach which she LOVED! 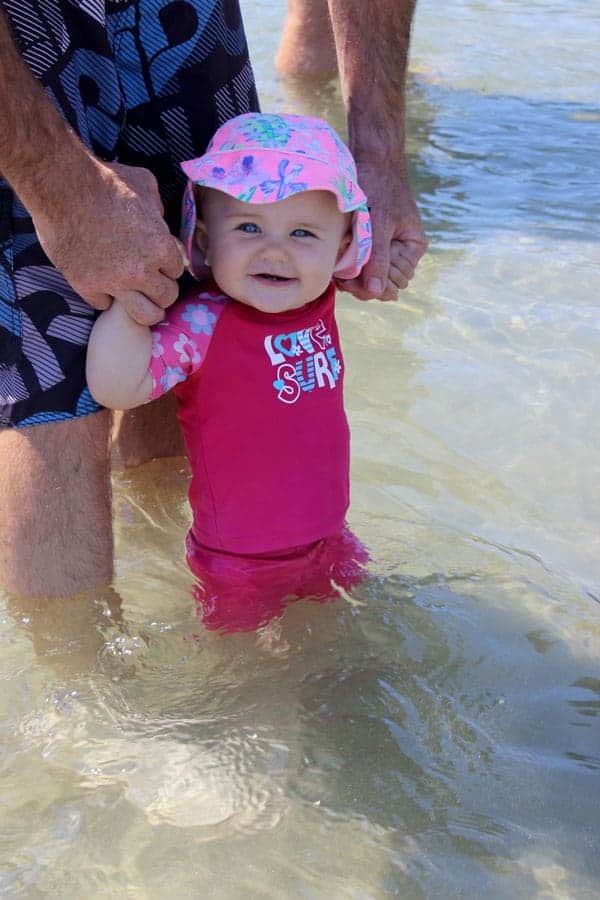 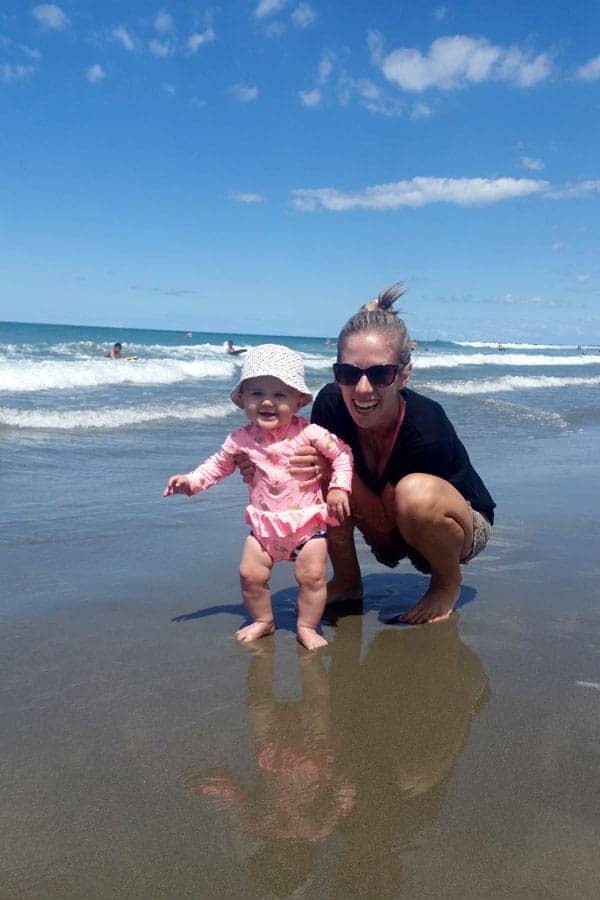 So at 8 months old I can tell you that Sadie loves being outside, being in the swing and watching the pigs and chickens, playing with Sage, putting EVERYTHING in her mouth, when I make truck horn and monkey noises, sitting up and splashing in the bath and when her Dad gets home.

She doesn't like sitting still, being dried after her bath or having her nappy changed but luckily for us, that's about it! 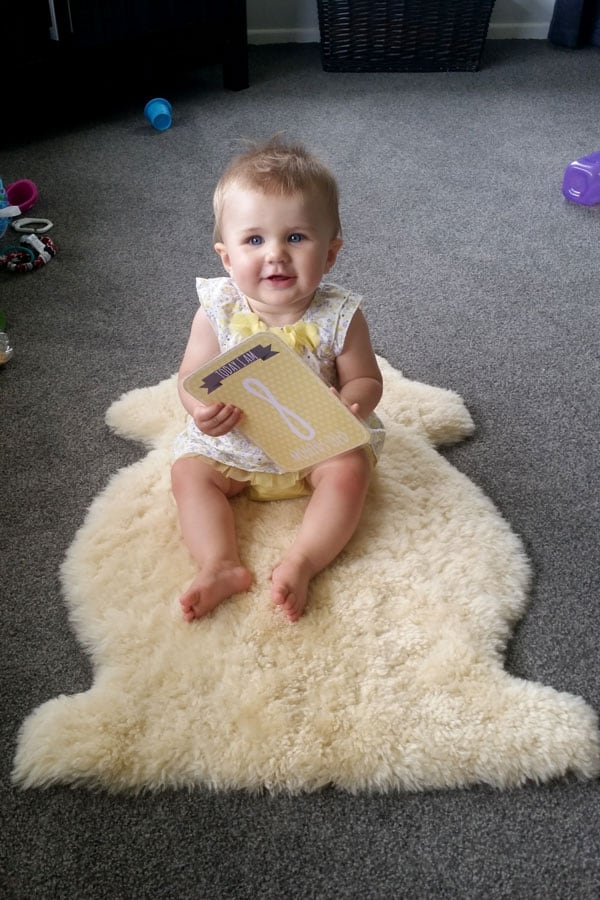