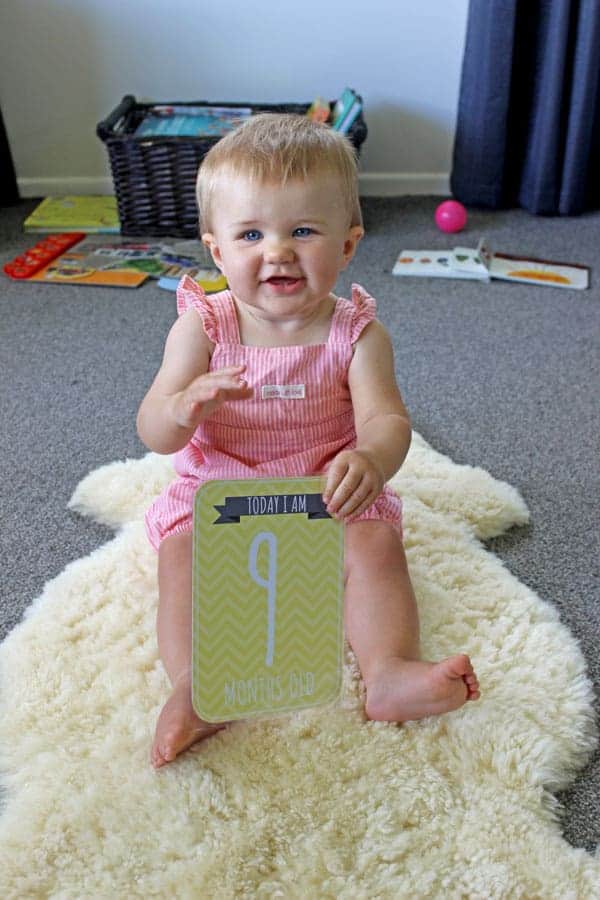 It's taking me so long to get around to writing these posts - life with Sadie is so busy, especially now that she's on the move. I always have to keep one eye on her. So many people commented about how little you can get done with a newborn...showering, cooking dinner and general jobs but I honestly couldn't disagree more...I get WAY less done now! When she was tiny I could either wear her in the carrier and she would fall asleep, or I could leave her lying on the floor and she would still be there when I got back 15 minutes later. Not in the bathroom with her hands in the toilet, or in our bedroom putting my phone charging cord in her mouth, or outside letting the dog who actually rolls in poop rub up all against her...you get it. She's trouble! 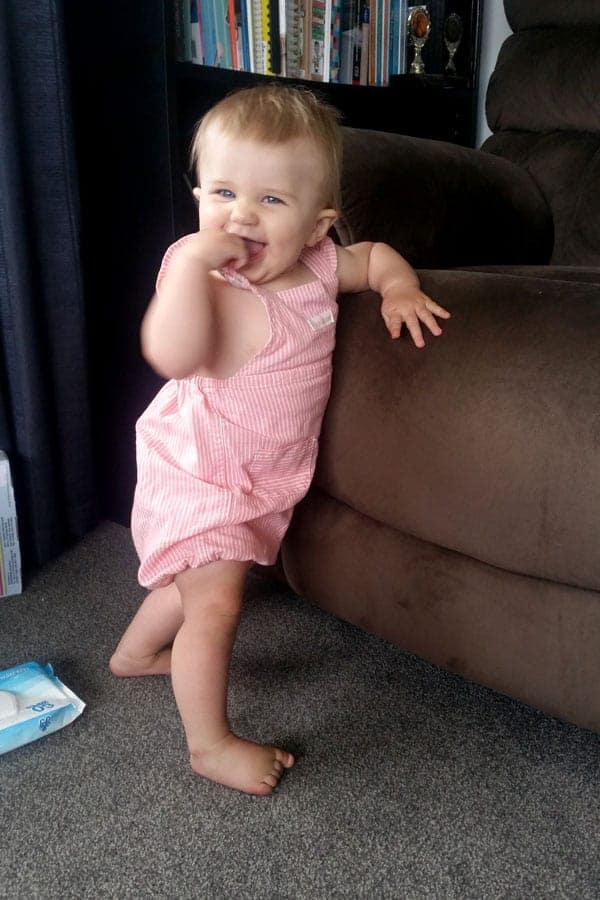 So only about 1 week after she turned 8 months, she started pulling herself up on the furniture - we were at our bach and the couch was just the right height for her. She thought she was so clever!

And speaking of the beach we spent a lot of time there over summer. Sadie loves the beach! She wasn't at all worried about the waves, loved eating all the sand and watching the dogs and seagulls on the beach. 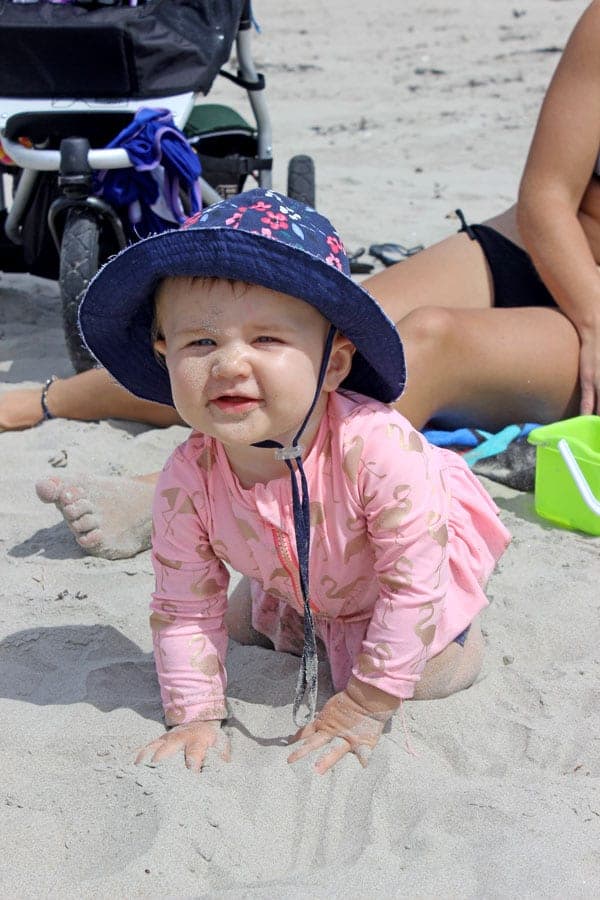 She really loves food - so far there is nothing we've given her that she doesn't like which is great! She is especially obsessed with blueberries and eggs! The downside to her loving to eat everything is that she puts literally EVERYTHING in her mouth. Paper, bugs, dirt and this weird fruit that had fallen off one of the trees when we were at the park. But it was in a children's playground so surely they wouldn't have poisonous fruit falling right? (She was fine 🙂 ) But I'll take the "everything goes in her mouth" phase as long as it continues with food also! 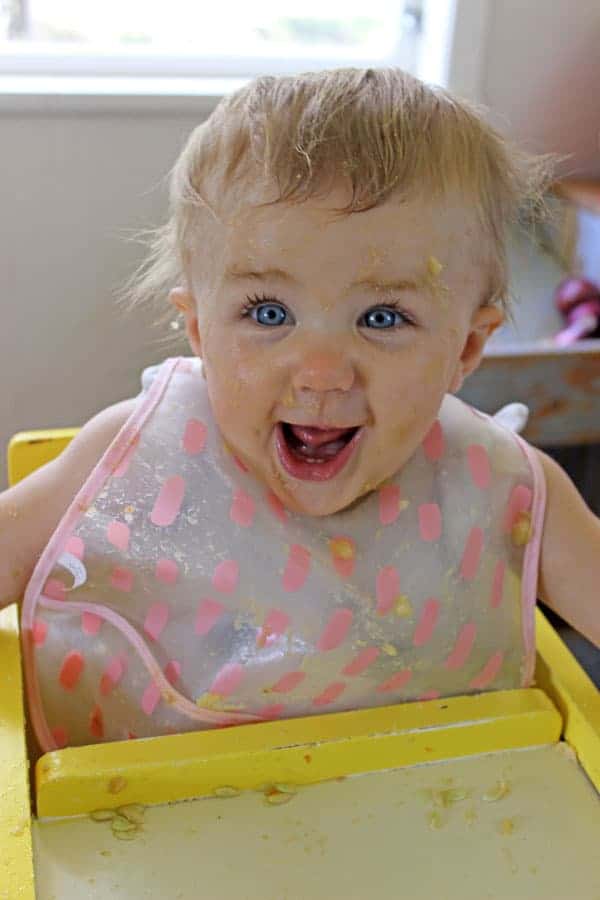 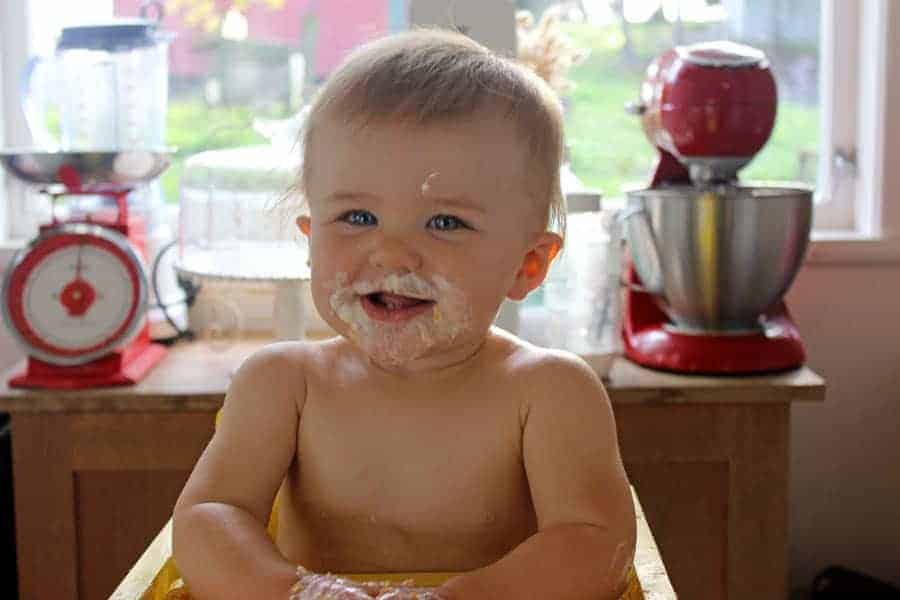 She has a couple of words now...Dad & dog. Go figure! She uses them in the right context when Josh & Sage are around and also uses them for other things, but we're pretty sure she knows what she's saying!

The weird thing she has been doing this month is crawling around with things in her mouth! She'll pick up a toy she wants and carry it that way. I think it's pretty smart but I'm 100% sure she is just copying Sage and that she actually thinks she is a dog! Also, she crawls on her knees normally inside but gets up on her hands and feet outside and to get over obstacles or just on surfaces she doesn't like. Clever girl! 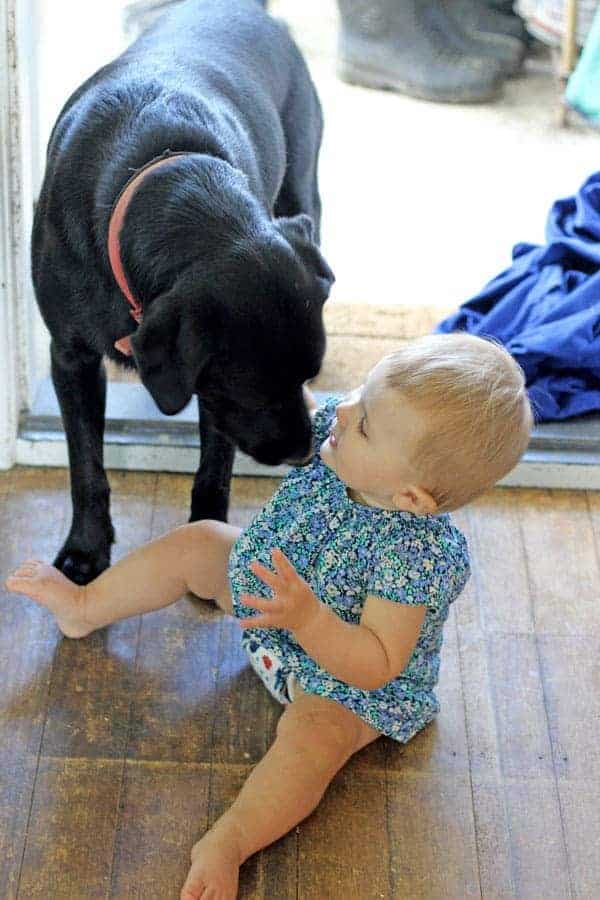 Sadie absolutely loves being chased - if we someone is holding her and another person starts following her, she thinks she is being chased and gets hysterical...good hysterical, in fits of laughter! Her cheeky personality is really starting to emerge and she makes us laugh every day. 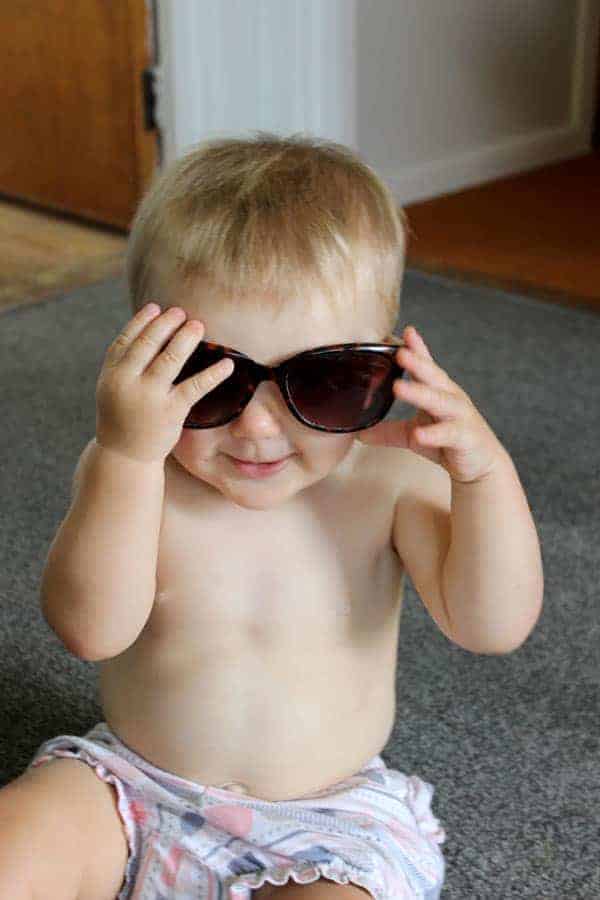 She can hi-5, blow kisses and blow bubbles in the bath. She loves looking at books, turning the pages and lifting the flaps. And eating them (of course) Just like when she was a baby she still takes a while to warm up to a new place/people. It's usually when we're about to leave that she decides she's happy there. She is really starting to recognise and happily interact with our close family and friends which is really fun to see.

Lately she has started being really against going to bed and stands up in her cot but will lie back down as soon as we go into the room. It means that we are constantly going in and out of the room, which would be pretty amusing if it wasn't so annoying! But she is sleeping pretty well which is nice. The other challenges have been that because of how wriggly she is, nappy changes are near impossible without some sort of carnage and weirdly she has decided she is scared of the vacuum cleaner. Terrible timing because thanks to her need to eat everything in sight, I need to vacuum more often which is hard when she freaks out! 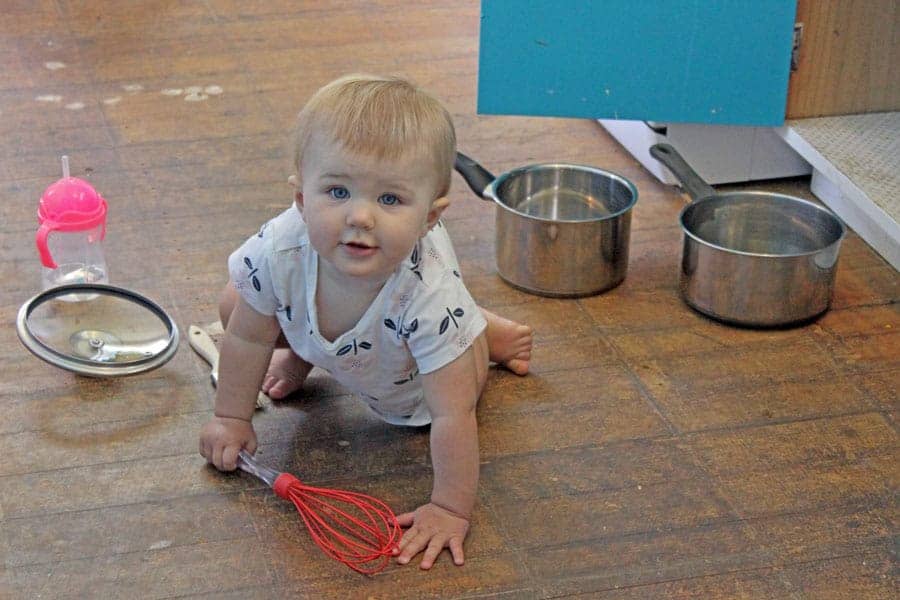 We are still having fun going to our weekly mum & baby class and swimming occasionally too. I am really loving being Sadie's mum and being lucky enough that I get to stay at home with her and watch her grow and change every day. 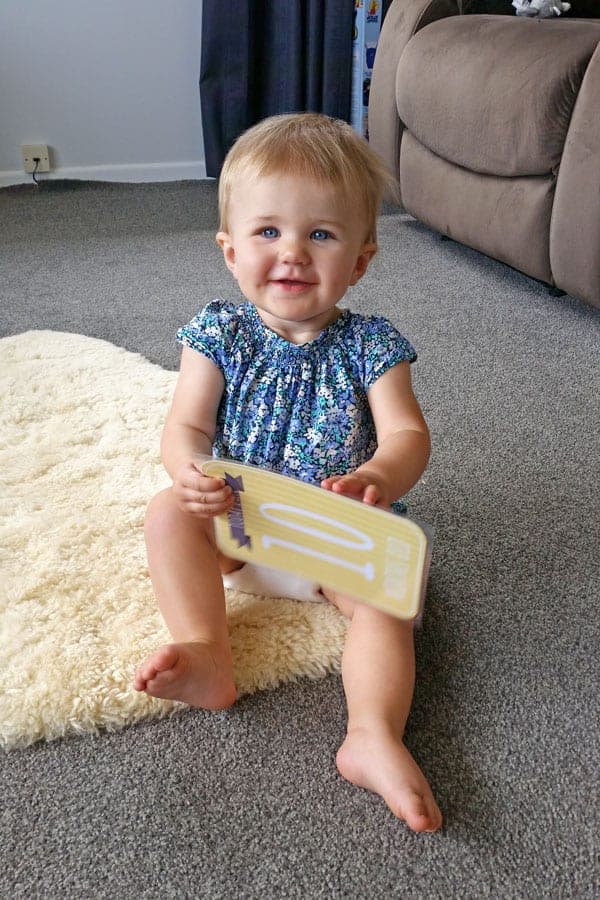 The other thing that has made us just so happy is that she genuinely LOVES being outside and on the farm. When we get up to the farm and she sees where we are she starts kicking her legs and getting all sorts of excited! She loves chasing the sheep into the yards and being around the cattle. It is awesome...she's living up to her title of the Kiwi Country Baby for sure! 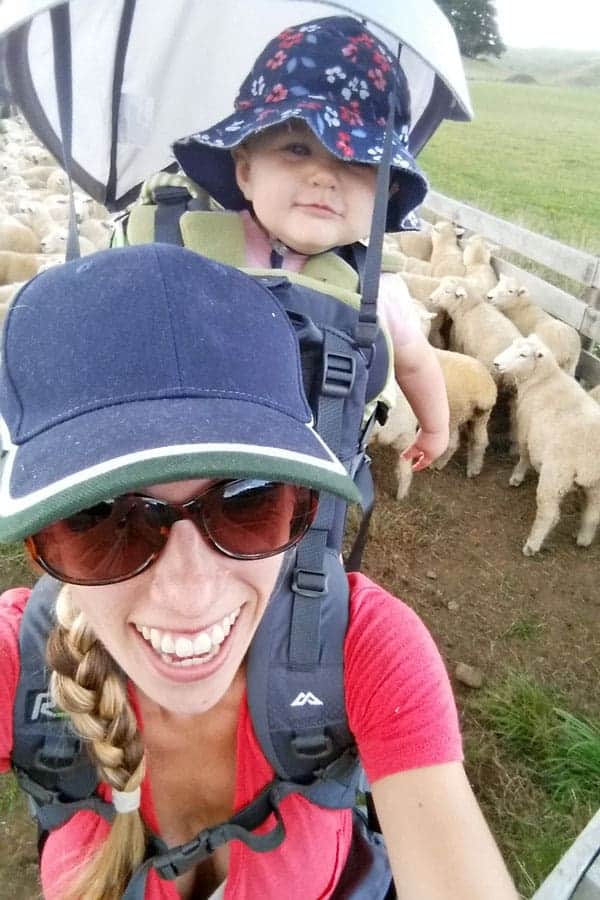