We eat quite a lot of Mexican food but our all time favourite and Friday night go-to is burritos. The only thing that frustrates me is that the flour tortillas you buy can be so hit and miss - cardboardy tortillas that crack as soon as you roll them up...no thanks! For a while now I've been keen to try making my own but have never had the time/been bothered...until today when lunchtime rolled around and I had a hankering for a quesadilla and no tortillas in the house.

I found a recipe, in 30 minutes I had 8 tortillas and maaan were they good! I may or may not have slathered one in butter right out of the pan and eaten it hot. We don't judge around here.

It is a very simple process:

Mix together flour, baking powder, salt, oil and hot water and knead for 3 minutes. Cover and leave to rest for 15 minutes.

Split the dough into 8 portions and roll into balls.

Roll each ball into a tortilla sized round. I used a rolling pin for some and just smoothed out some with my hands. They're not perfectly round but I wasn't too bothered!

Have a non-stick fry pan ready to go. Once the pan is hot, throw the tortilla in and keep a good eye on it. My recipe said to leave the tortilla while it bubbled up but I found (after 6) that this was making the tortillas too crisp and brittle. Put the tortilla in the pan, watch as it changes colour (it will almost go slightly translucent) and as soon as it shows the first signs of air pockets, (after about 30 seconds) flip it. The tortilla should have a few little golden brown spots on it. Leave it on that side for another 30 seconds and then pull it out and put it on a cooling rack.

The crispier tortillas were perfect for quesadillas but if you wanted to make burritos or wraps, cooking them for less time would be the way to go.

I've seen recipes that suggest you make a big batch and freeze them which I will try next time. And there will be a next time - I don't think I'll be going back to store bought tortillas now! 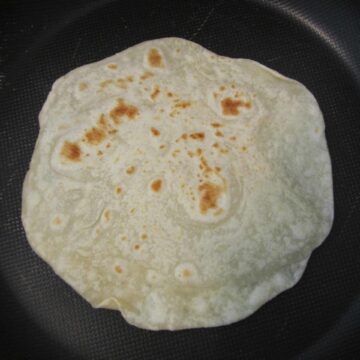