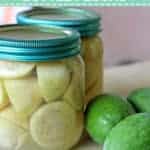 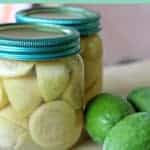 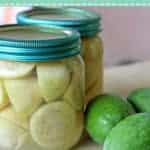 A step by step tutorial to teach you how to bottle feijoas - the best way to preserve them so that you can enjoy them all year round!

Update September 2020: I now exclusively use the water bath method for canning/bottling everything as an extra layer of food safety. I will be updating instructions over the next few months to share how I do that. I have never had any problems bottling them this way but now prefer the water bath method in terms of ease and having a higher success rate with jars sealing. Laura 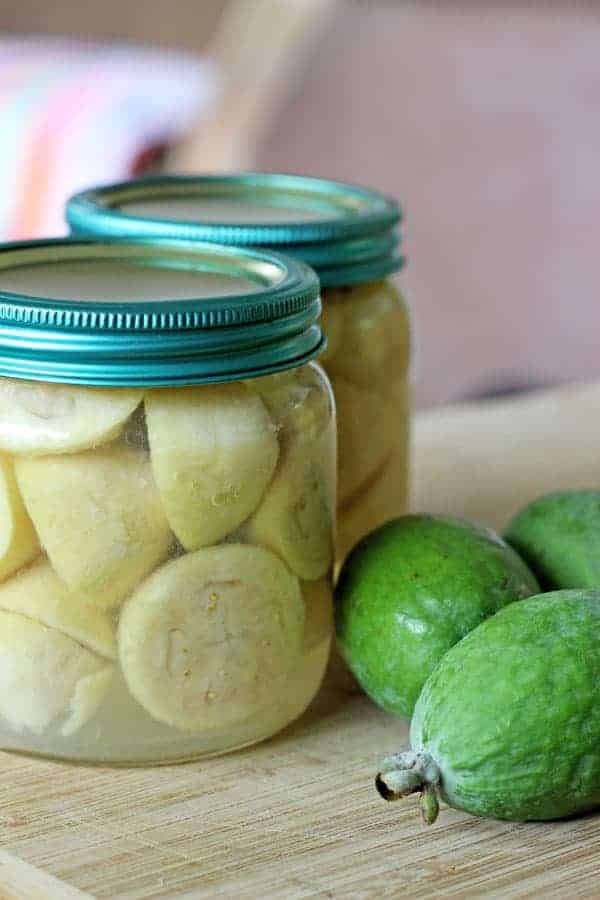 It's feijoa season in NZ at the moment and they are everywhere. You can buy them from the supermarket but I don't know anyone who has ever done that because if you don't have a tree, you probably know someone who does and those little suckers can produce! If you don't know what a feijoa is, I don't even know how to explain them. They are a little fruit in a tough skin that have a kind of grainy flesh with a jelly like inner. And the flavour is not like anything else. And going on that description, they sound terrible...but they're not!

There are a ton of things you can do with feijoas (also known as pineapple guavas in other parts of the world apparently). Scoop them out of the skins and eat them raw, stew them, make jam, bake cakes, make desserts, chutneys...the list goes on.

The problem is, they are so good that once you have a bag in front of you it is hard to stop eating them. I know at least 5 people who have had one season where they ate so many feijoas they made themselves sick and now can't stand them. I don't want to be that person. Please don't be that person! Let's be sensible. I like to eat a few, and then a few more, and then bottle the rest so that I can enjoy them all year round! So here is how to bottle feijoas - step by step, with pictures to help you!

All you need is:

Enough preserving jars to fit your feijoas and seals & screw top bands to go with them. You could also use old jam jars but I love using the Agee jars my mum used to use! They need to be sterilised before you use them so either run them through the dishwasher or wash them well in hot, soapy water. 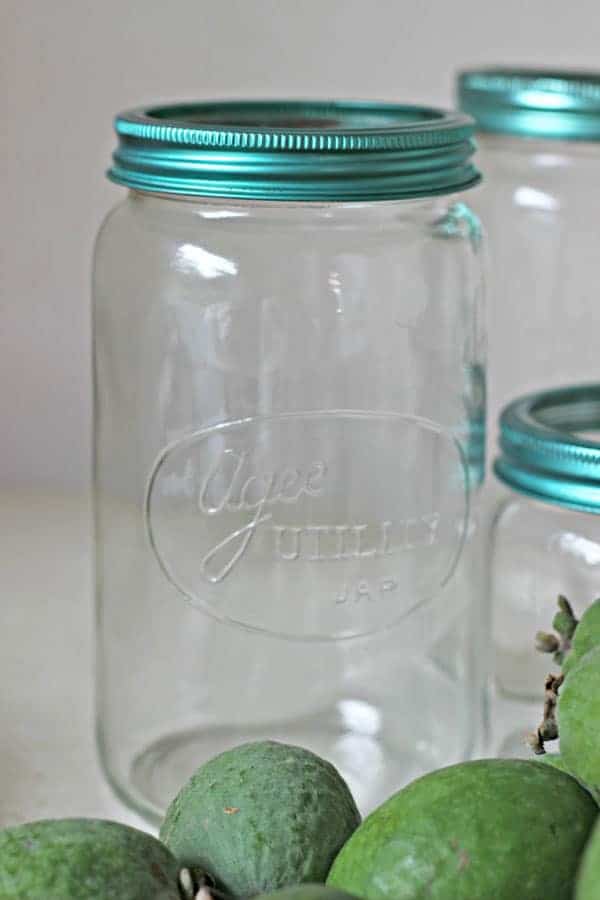 Water, a bit of sugar and a big pile of feijoas. 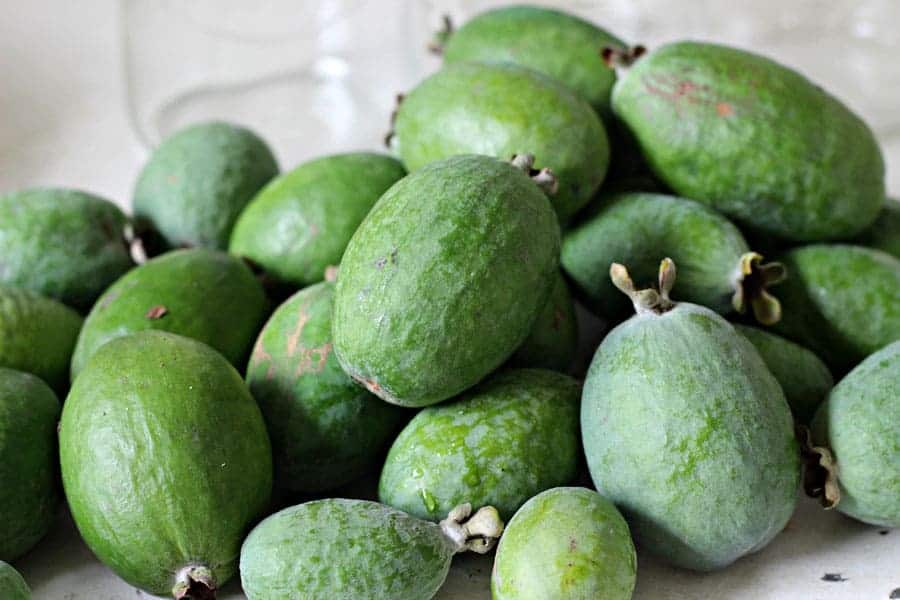 Put water and sugar in a saucepan and bring it to the boil. You can pretty much use whatever ratio of sugar to water that you like, depending on how syrupy you like them. I like to reduce the sugar I add as much as possible so I use ½ cup of sugar to 3 cups of water.

In a separate saucepan cover the seals and screw top bands for the jars in water and bring to the boil. You want to keep both pots boiling until you use them. 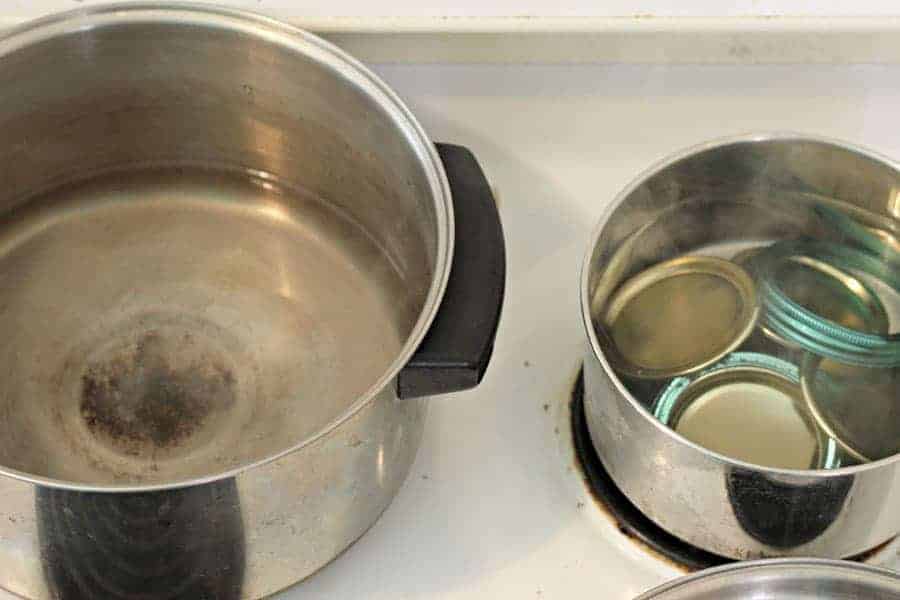 Cut the feijoas in half and using a teaspoon, scoop out the flesh getting as close to the skin as you can. You could peel them and then cut in half but that is way more work than scooping. 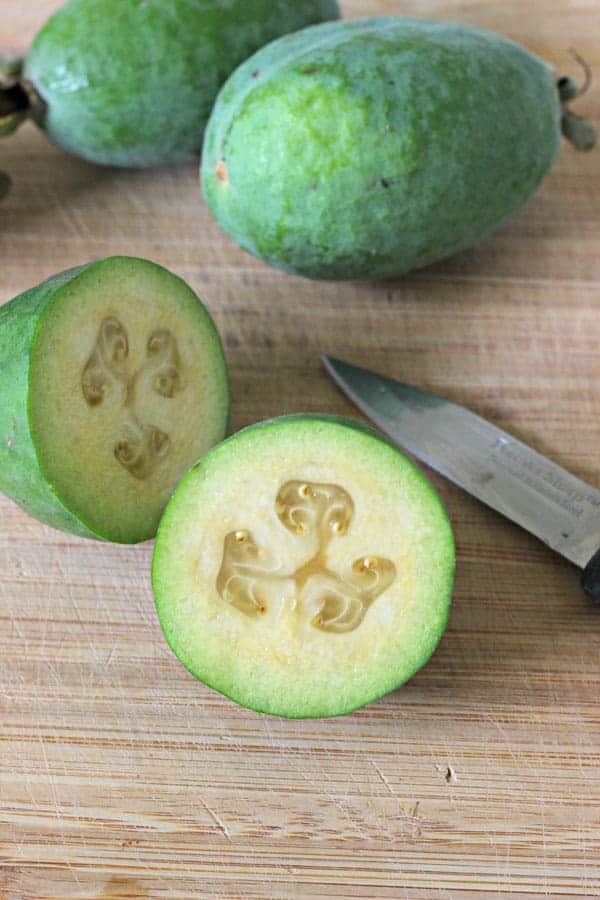 Keep scooping until you have a big pile of fruit, ready to go in jars. 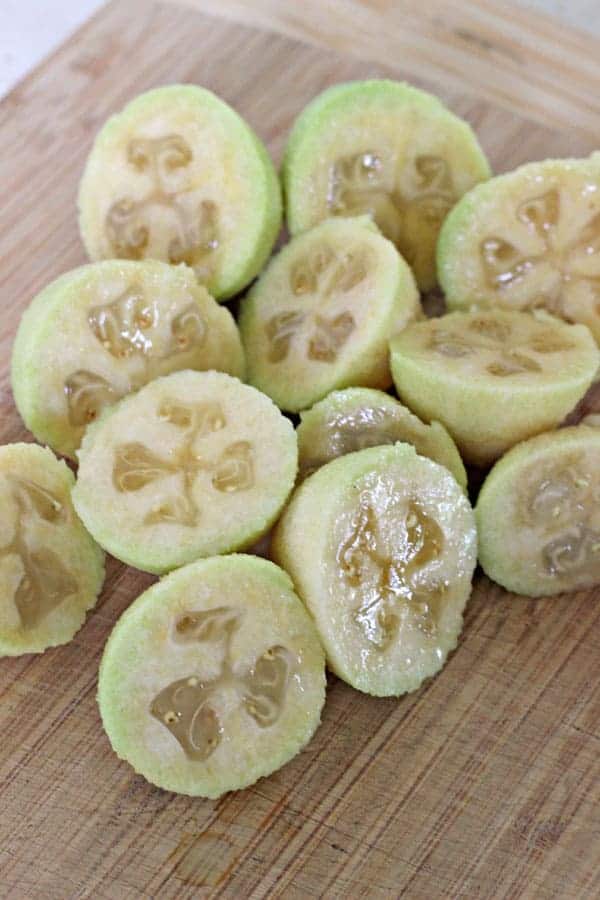 Make sure after sterilising the jars (very important!) you keep them full of hot water until you are ready to use them. You will be putting boiling liquid in the jars and cold jars + boiling liquid = a big mess. And we don't need that. 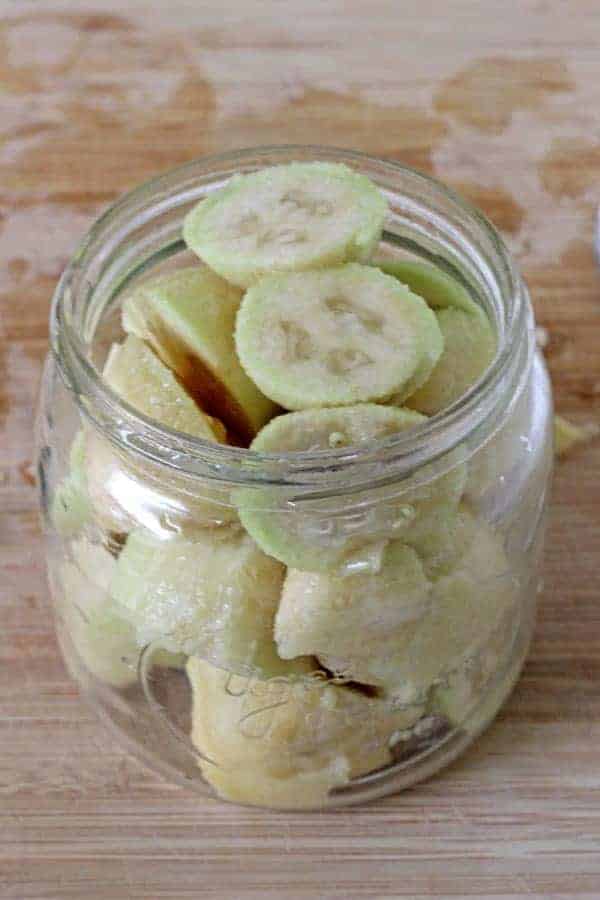 Fill the jars almost to the top with the liquid, then cook briefly in the microwave. 50-60 seconds for a small jar, 90 seconds for a big jar. If you are using jam jars, skip this step - I haven't tried it but I don't know that these jars aren't quite as tough as proper preserving jars. After cooking, run a knife around the inside of the jar to remove any air bubbles.

UPDATE 2018: I now bottle my feijoas on the stove. Once the sugar syrup is boiling add the feijoas and bring to the boil again. Cook for 2-3 minutes and then fill the jars with fruit & sugar syrup, run the knife around the inside of the jar to remove air bubbles and then continue on. There is nothing wrong with the microwave method, it still works perfectly well, I have just grown to prefer this method. 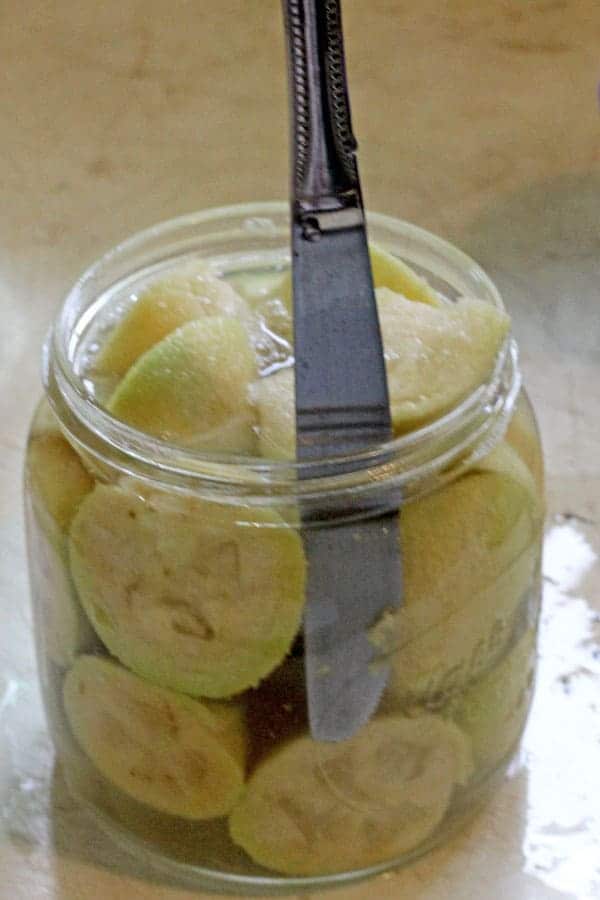 Fill the jar up so that it is almost overflowing. Make sure that all the fruit is out of the way of the edge of the jar - you don't want anything being trapped under the seal. 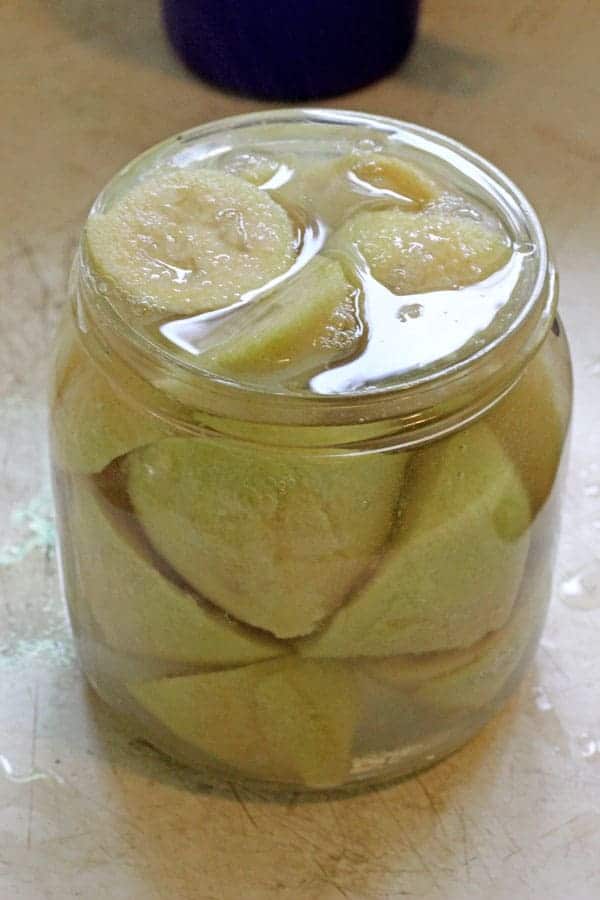 Putting the lids on the jar can be tricky and needs 2 hands. Using tongs remove a seal from the boiling water and place it on top of the jar. Take a screw band from the water and at the same time press down the seal and screw the band on tight. You may need to use a tea towel or cloth as the jars will be hot hot hot.

Wipe down the sides of the jar and leave to sit on the bench for about 24 hours to make sure it seals. If the fruit starts floating slightly that is generally a good sign that they have sealed. 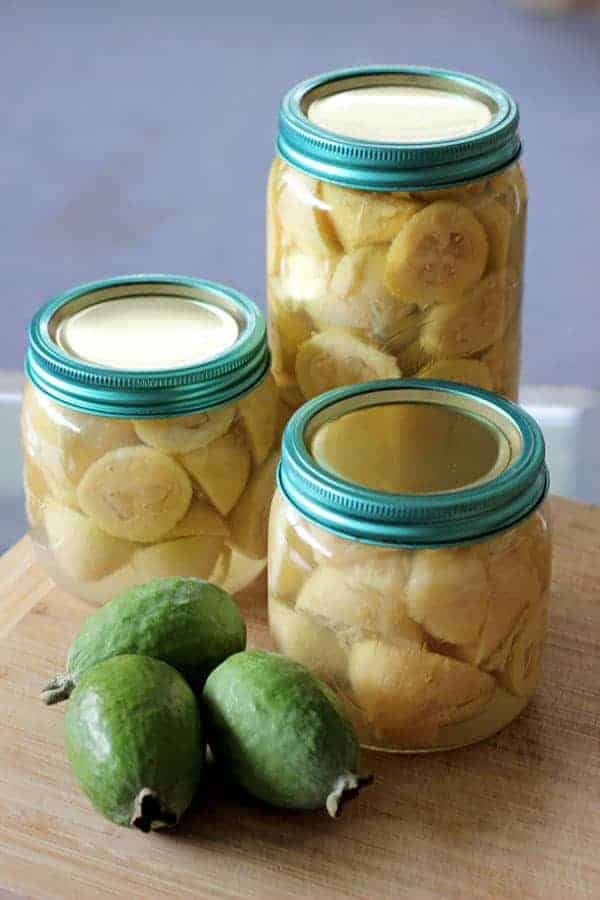 Store in a cool dark place and open in the middle of winter to put in a feijoa & apple crumble on a cold night. Yum! 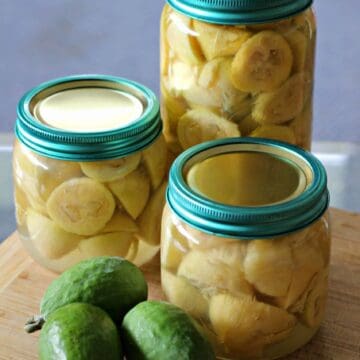 How to bottle feijoas

A step by step tutorial to teach you how to bottle feijoas - the best way to preserve them so that you can enjoy them all year round!
5 from 9 votes
Print Pin Rate
Prep Time: 30 minutes
Cook Time: 5 minutes
Total Time: 35 minutes
Servings: 2 500ml jars or 1 1L jar
Author: Laura

UPDATED 2018 - I have recently started adding the feijoas to the sugar syrup on the stove, bringing to the boil and cooking for 2 or 3 minutes and then adding the fruit and the syrup to the jars. This removes the need to use the microwave which I like. Once you have filled the jar up with fruit and sugar syrup, continue from step 5