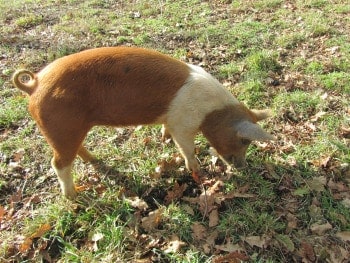 As it is nearing the time for our Pig to graduate we decided that we needed to get another piglet to keep him company and to keep the pork supply rolling! Josh's aunty & uncle happened to have a weaner ready to be sold so we picked her up a couple of weeks ago and took her home. As this was around the same time that our pig vs chicken saga was happening we decided to keep her in a stock crate in the paddock until we had separated the animals - I didn't think that 2 pigs vs chickens was going to end any better!

Once we had sorted the fence we let her out and after a bit of rough and tumble Girl Pig and Boy Pig were the best of friends! It's really good having 2 of them - they are great company for each other.

We have also added to the collection 3 "pretty chickens" They are 3 month old black & white Plymouth Rock/maybe Wyandottes...the lady we got them from wasn't 100% of the breed but they were close to home and looked pretty cute to me! We originally had 4 however we made the mistake of putting them straight in with our brown shavers -  they are a lot bigger than these guys and took the establishment of the pecking order very seriously resulting in the complete shock and shut down of one of them. The other 3 are doing really well now and after a week of living through the netting from the big chickens they are now all roaming around together. The big chickens certainly like showing them who's boss though! 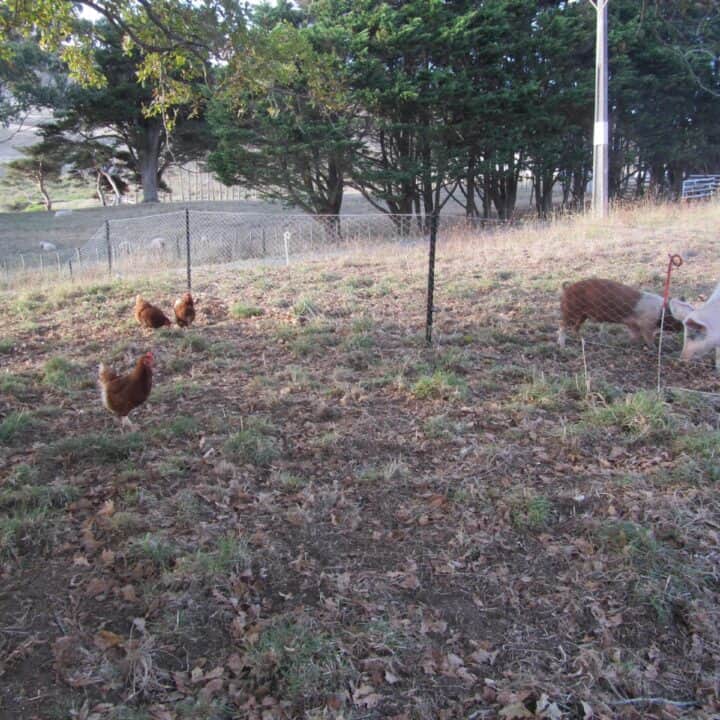 We thought that because the pig and chickens had been perfectly happy living in the same paddock together for 5 months they would be fine.

We started noticing that the pig was playfully snapping at the chooks every now and then. That was fine until I was up in the paddock and saw that a couple of the chooks had slightly damaged wings. It looked as though our pig was helping himself to an all you can eat chicken buffet.

As much as I loved having the animals in the same paddock we decided that our little egg laying machines needed to be taken care of so we built a fence, but unfortunately not before pig took a chunk out of one of our poor chooks as we were laying out the fence. It was a wee bit stressful to say the least - I'm not sure who was more traumatised, me or the chicken!

We opted for a simple fence made from waratahs, a couple of hot wires and chicken netting - hot wire to keep the pigs in and netting to keep the chickens out - as much as I love them they're not particularly smart and are still not afraid of the pig!

Since then the animals have all been living very happily on opposite sides of the fence. Luckily the chickens are pretty tough and the 2 that had been injured survived - they're not laying at the moment - no surprises there - but they're looking much happier a couple of weeks on! 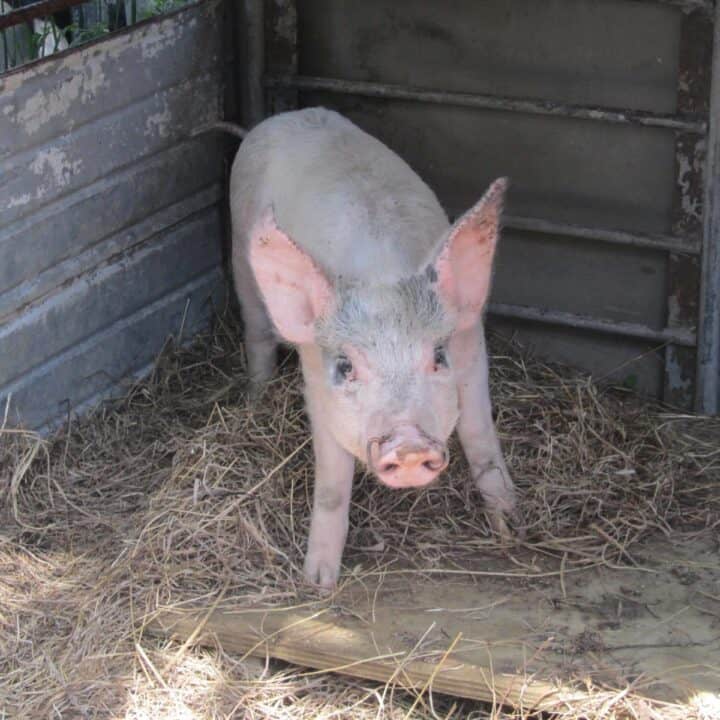 Somebody told me that chickens were gateway animals...this was certainly not a lie!

Once we realized how amazing it was having our own free range eggs right outside our door the obvious next step was bacon to go with them! Our neighbours had a weaner piglet ready to be sold and we said yes! Our little piggy arrived and although initially quite unfriendly he soon realized that we were his food source and became much more tame.

We originally had him in a stock crate down in the yard but built him a small enclosure in the chook paddock. This was supposed to be temporary until he got settled and then he too would have free reign in the paddock but things don't always go to plan...

The afternoon we were ready to move him to the paddock we had it all set up nicely, Josh carried him in a wool sack and we set him down in the pen. He ran around in a few little speedy circles and then stopped. We placed a tray of pellets in the pen with him and thought we would give him some space to calm down but Josh's dad thought he would give him a little push in the right direction. Well, for want of a better phrase all hell broke loose! Piggy took off and with squeals that still make me cringe thinking about it, squeezed through the fence, hot wire and all and made his escape. He spent the next half hour cruising around our front lawn while we tried coaxing him with food. When the gentle approach didn't work we attempted to sneak up on him and catch him but instead he took off in the opposite direction towards the neighbours farm. This was now getting serious. We knew he wasn't tame enough to come back and if he went through that fence he was gone for good. By this point I was on the verge of tears...we hadn't had him long but he was still our little piggy!

Eventually Josh and his dad managed to herd him through the gate into the paddock and giving up on the idea of trying to get him back into the small pen, we just decided to let him go for it in the paddock. Since then he's been co-existing very happily with the chickens. The first couple of weeks he spent tearing around after the chickens much to their disgust but once he started getting fat the running around slowed down considerably!

We're very lucky as I'm able to take a pig bucket into the cafe next door to my work and twice a week I bring home a bucket full of scraps often consisting of scones and cakes for him! It's clearly working as he is growing very fast. He's 7 months old now so is not too far away from "graduation" as we like to call it. One of the best things about having a pig is that absolutely nothing goes to waste in our house now. It amazes me what he will eat - he's certainly not fussy!

Although he has his flaws - the rings in his nose aren't doing the best job at stopping him from rooting up the ground - he's very friendly and loves nothing more than a good back scratch. It's great looking out the window and seeing him cruising around with the chookies - it's our little farmyard, or as one of my workmates likes to call it, our breakfast paddock! 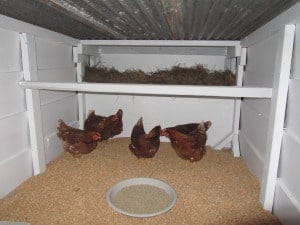 I think our chicken adventure began about a month after we had got settled back in Te Akau. Josh had started clearing the paddock next to our house that was completely over grown with blackberries and privet and I suggested that we could put some chickens in there. Somehow I don't think that was quite what Josh had in mind for the paddock but he happily went along with it (he does this a lot...he's pretty awesome!) What entailed was 4 months of after work planning, researching and building to create a coop that would not only sufficiently house 6 chickens but would be more of a chook mansion!

Once we had the coop built and painted a beautiful barn red, the next step was moving it up to the paddock - easier said than done! Josh and I managed to move the framing for the run on our own...

...but it took 4 strong men to move the coop itself! I was conveniently at work that day and arrived home to this amazing sight!

Finally by July we were ready for our 6 little ladies to move into their new home. We got 6 brown shaver chickens but now it was time to learn how to take care of them!

They were 16 weeks old when we got them and at the point of lay but they must have been raised in quite small quarters as they had no idea how to roost, jump or where to lay. We had to add more ramps and teach them how to use these to get into the chicken coop and another to get into the nesting box and onto the roost. We also had to teach them how to perch. The first night they couldn't get into the coop and we found them sleeping in a pile in the corner of the run. The second night they made it into the coop but slept in the same pile in the corner of the coop. It took a few weeks for them to get the hang of it all - we were finding eggs all over the place for the first month but they have it sorted now and aside from the odd lazy layer - eggs on the floor underneath the roost - we get 5-6 eggs a day in the nesting boxes...even after 9 months it's still just as exciting opening the door of the nesting box to see what's inside!