Hey check it out, I'm all caught up! I am actually 26 weeks now (well, almost 27) so we're in real time! Yay! I can't believe that I am almost in the third trimester...the first 12 weeks seemed to take forever and I feel like I've blinked & missed the last 14! It's starting to seem a bit more real now that we are making couple trips to baby shops to test drive prams and look at cots...eeek! Here's the 26 week update on Baby Mac! 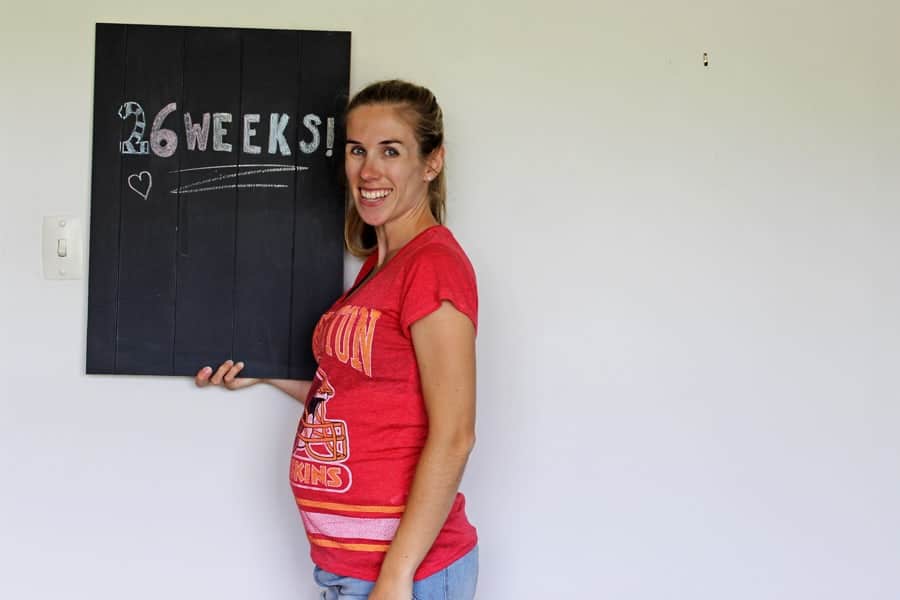 Bump size: Definitely baby sized and seems to be growing by the day. Although I was having a conversation with a coworker today and someone else had to tell them I was pregnant! Loose fitting singlets are still pretty forgiving apparently!

Size of baby: Baby is as big as a coconut, about 35cm long and weighs about 750g…it grows so fast!

Weight gain? I caved and got on the scales at Josh's parents house. Probably not my smartest move! It's hard to tell as I don't know exactly how much I weighed to start with but it's looking like somewhere between 6 & 8 kilos so far which seems like quite a lot, but it does seem to all be in my belly which is a good thing I guess! We will ignore the fact that the actual baby is taking up less than 1 of those kilos!

Boy or girl? It's still a surprise! For us too. Josh thinks it's a girl - he has from early on but I have absolutely no clue. No thoughts, feelings or suspicions. I'm totally blind. Other people's guesses are almost 50/50 at this stage too which is kind of amusing!

Cravings/aversions: Craving summer fruit & juice still. The juice thing waned out a little bit but it's back with a vengeance - even after typing the word juice I had to get up and have one! I'm not sure what I'm going to do when summer fruit is out of season! And no aversions which is great!

General feelings: We are starting to feel like we need to be getting organised. The realisation that I'm suddenly almost in the third trimester has sunk in and we need to start doing things!

Looking forward to: Decorating the nursery and starting to buy some of the essentials. So far I've been doing a WHOLE lot of online research but it's almost time to start making decisions and picking stuff!

Missing anything? I'm really not at this stage. I'm lucky enough to be really enjoying being pregnant so I'm pretty much just loving the whole process at the moment.

Movement: Even more than before, which already seemed like a lot! And it's all the time now too, not just at night or when I'm lying down. Getting more slower movements where we can see that the baby is actually changing positions in there rather than just the kicks too.

What I’ve been loving: The movement for sure. Also, I started going to a pregnancy yoga class which I am loving even more than I thought I would. It's been a cool way to chat with other expectant mums and get a bit of exercise too.

What I’ve not been loving: The blocked ears are still happening and I've started to have a little bit of pain in my lower back on one side occasionally, but again, nothing too serious!

Maternity clothes? No official maternity clothes yet, still just stretchy things and loose flowing tops and dresses. My jeans still fit but they need to be unbuttoned when I'm sitting down!